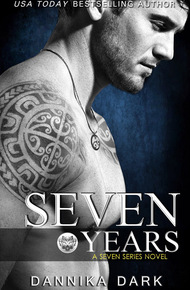 USA TODAY Bestselling Author Dannika Dark was born on a military base in the U.S. and had traveled the world before she was nine. Now she is rooted in the south, but her head is planted firmly in the clouds. When Danni is not writing, she enjoys a great sci-fi or fantasy movie, heaps of chocolate, and unleashing her dark side.

It's been seven years since Lexi Knight lost her brother in a tragic accident. On the anniversary of his death, her brother's best friend shows up unexpectedly - a man she hasn't seen since the funeral. He is no longer the boy Lexi once knew, but a dangerous-looking man with tattoos and dark secrets. He broke her trust and abandoned her family, yet what he reveals makes it impossible to stay angry. Lexi has been secretly infatuated with Austin since childhood, so finding out he's a Shifter just makes him sexier. Dammit.

Austin Cole has returned to the city where he grew up, and just in time. He's lived a hard life these past seven years, and the shadows of his past are threatening to destroy Lexi's family. It's time that she learned the truth about her brother, but there is a shocking twist that Austin never saw coming. Now he must protect her family when her mother and sister wind up in mortal danger. Will Lexi learn to accept the truth about who he is, and can Austin salvage a relationship from the ruins of their past?

I've been watching Dannika's writing career for a little while now and it was an easy choice to reach out to her. I was thrilled when she said she wanted to be in this bundle!

"Seven years ago, my world ended.

I don't care what anyone says, every girl needs to have a good long cry once in a while. The kind that weakens you, swells your eyes shut, and strips away every shred of emotion from your body until the pain subsides. The pain of… whatever. Death, heartbreak, solitude, desire, jealousy. All the crap that becomes a badge of honor among women—like those little merit badges Girl Scouts have sewn on their uniforms, only these badges are stitched across our hearts.

Of course, the last place I needed to have a meltdown was in a candy store by the gummy worms. Sweet Treats had closed half an hour ago, and I was restocking the shelves while April handled the cash drawer.

It used to be a fun place to work… when I was twenty-one. But now I was twenty-seven and this shit was getting old. Maybe it was the smell of chocolate in the air playing tricks on my hormones, or watching all those rug rats screaming up and down the aisles and wishing I had one. Or maybe it was the fact that Brooke Worthington (although in high school she went by Brooke Jenson) had walked into the shop wearing a business suit with three kids in tow and asked, "Is this what you've been doing since high school?"

"Alexia, what's the matter?" April peered at me from around a stack of canisters, her charcoal-lined eyes wide. "Did someone die?"

Which brought another gasp to my sob.

Tomorrow will be the seven-year anniversary of my brother's death. My older brother by three years, who taught me how to ride a bike because our dad was a total dick and ignored me. My older brother, who piled our beanbag chairs in front of the television and made awful microwave popcorn while we watched a scary movie whenever our parents went out. My older brother, who was into muscle cars and hung out with all the bad boys my best friends for life (whom I haven't seen since high school) wanted to marry. My older brother, who gave me Indian burns, hid my pink razors, and intimidated the hell out of my boyfriends when I started dating in high school.

My older brother, who was killed in a motorcycle accident when he was twenty-three and found two days later by passing motorists when they spotted his bike in a ditch off Highway 71.

April didn't know about my brother, Wes. Sometimes there are chapters in our lives we don't want others to read. She'd started working here a year ago when she was twenty-one, but the girl had plans. She had been submitting her résumé to the top companies in the area in hopes of getting her corporate career started. Her long-term goal was to be a project manager, but handling the register and the books stretched her experience in the meantime. Our boss even added on a few additional duties to give her an incentive to stick around. Plus, she had a backup plan of becoming a store manager if the corporate gig didn't pan out.

I didn't know much about April's personal life because she wasn't one of those girls who put it all out on the table. I once asked about her mom and she clammed up, so I never brought up the topic again. All I knew was she was a workaholic who talked about books, complained about her younger sister, adored animals, and possessed a charismatic laugh that turned heads. I always found myself doing or saying silly things to bring a smile to her face.

"I'm fine," I lied, but it came out all garbled, so I cleared my throat.

"You don't sound fine. Does this have to do with Beckett?"

She smiled innocently and lifted her shoulder. "You're still separated, right? Sorry, but he's hot and you can't blame me for assuming you worked things out."

"He's also an asshole with a temper, not to mention he has a disturbing obsession with professional wrestling."

"Thought you liked the bad boys?"

I bit my lip. Yeah, I kind of did. Not that I sought them out intentionally, but maybe I was subconsciously searching for a tough guy—one who would help me forget how out of control I felt at times.