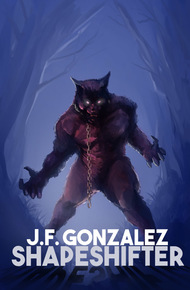 One of the most popular and influential writers of color in modern horror fiction, J.F. Gonzalez's books include PRIMITIVE, UP JUMPED THE DEVIL, THE CORPORATION, BACK FROM THE DEAD, THEY, BULLY, SCREAMING TO GET OUT, the best-selling CLICKERS series (co-written with Mark Williams and Brian Keene), and SURVIVOR, which is considered by critics to be a seminal work of extreme horror. His short fiction and academic writing about the history of horror literature appeared in over two-hundred magazines and anthologies during his lifetime. His forthcoming posthumous works include collaborations with Gabino Iglesias. Wrath James White and Brian Keene.

Mark Wiseman thought he had his curse under control. He thought he had kept it a secret. He was wrong. Bernard Roberts is a very wealthy man, and he knows all about what flows through Mark's veins. He also knows how Mark's parents were killed. If Mark wants Bernard to keep this knowledge to himself, he'll have to do whatever Bernard commands him to do. He'll have to unleash his inner beast and kill. But if Mark begins to loosen his grip over the wolf within, will he lose control completely?

Words live long after the creator is gone. Books give the writer a type of immortality reserved for characters we grow to love or sometimes hate in these books. Sadly, J.F. is no longer with us, but the OG of Latinx horror can still bless our minds and lives with his creativity and brilliance. I want to thank Brian Keene and the family of J.F. for lending us his words. This is an ebook exclusive, so you don't want to miss this opportunity. May this book keep his memory alive. – V.Castro

It always starts out the same.

He is running. The wind whips into his face and his hair blows back over his forehead as he runs. He is seeking something. Exactly what, he's not sure. The only thought in his brain is the pulsing need to roam. It deadens all other senses, propelling him forward. Everything else is nonexistent.

He runs through the woods, feeling the slap of branches hitting his face. Somehow he knows just where to go. He can sense that what he's seeking is just ahead, off to the left and down a slight gully. He reduces his speed as he approaches the gully that begins a slow descent down to the lake. He crests the rise, stops, crouches at the top of the incline and sniffs the air.

There, just ahead, oblivious to his presence. He always catches them unaware. He starts down the embankment slowly, not wanting to alert his prey. Every footstep is carefully planned and executed. His body assumes a sense of total control, moving with the smooth physique of a stalker, a carnivore on the hunt.He's barely aware of the ripple of muscles on his body as they work to move his limbs with sleek-footed stealth down the embankment. His vision relays messages to his brain; resulting in the perfect maneuvering of his lithe, lean body as it snakes down the gully. Without making a sound. Without disturbing a single blade of grass.

At the bottom he pauses in a crouch, sniffing the air. The wind carries the scent to his nostrils as gradually as it carries the aroma of rose petals, or the dusky scent of arousal. His ears perk, their radar-like sensitivity picking up movement. Around the bend, down another slight incline and he's right on top of the target.

The breeze is blowing against him, aiding in removing all traces of his scent from the target. Nature is on his side tonight.

His breathing slows to the point where he isn't aware of the natural act of respiration.

He continues his descent, past the deadfall on the right, around a slight curve, and then down the incline. He can see his target just as he tops the crest of the incline.

Tonight's target is middle aged. Maybe fifty. Sandy hair turning gray, thinning at the top. Blue windbreaker over a slightly paunchy body. He's seated on a beach chair, looking out over the lake. A fishing pole is embedded in a stand, which in turn is impaled in the ground.

The pole tilts out into the lake, the line gravitating into its depths by whatever bait the man has sunk it with. The man seems to be reading a magazine. Fish and Game? Playboy?

He creeps closer until he is virtually five feet behind the man. He doesn't make a sound as he approaches; not a foot breaks a twig, or steps on a leaf. He stops and pauses, respiration low and even. His pulse quickens as the adrenaline in his body starts churning, revving his senses into action. His eyes narrow into slits; his body crouches and launches into a spring.

It happens so fast that he's hardly aware of the act. He hits the victim in the back of the neck, sinking teeth into flesh. The man falls into the shallow depths of the lake; the magazine flies into the mud. He stays on top of his prey, holding him down as teeth sink into tender flesh.

There isn't much of a struggle. Not even a brief flopping of limbs. There never is.

He raises his head to the moonlit sky. The horizon is turning a murky, darkened gray as the twilight becomes the dawn. The warmth of blood in his mouth doesn't even register as he gazes at the slowly descending moon and lets out an ear-piercing howl.

It is that sound, the sound of a wolf baying at the moon that awakens him. He jerks abruptly into consciousness, the bedsheets slick with sweat, his breath coming in gasps. The

stillness of the air is broken by his screams as he springs up from bed, his thoughts whirling.

Reality crashes in and the bedroom swims into a more familiar circle of scenery. His breathing is the only sound in the room as he struggles to calm himself. It slows to a more steady rhythm as he leans against the headboard with sweat dotting his skin. The dream again. The goddamn dream.

But it's becoming less and less of a dream. The memories of stalking, the smell of the prey in his nostrils and the taste of blood in his mouth attest to the fact that dreams and reality can merge and become one.

Just as they were doing now.