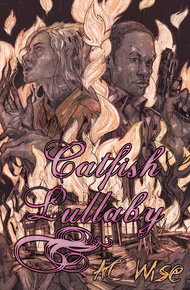 Catfish Lullabyis a split story following Caleb and Cere, part as children, part as adults, as they deal with homegrown bigotry, sorcerous generational evil, and the ever present, bog-monster specter of Catfish John. All while embracing the love of found family.

​The Royce family has been a plague on the small, Southern town of Lewis for generations. Caleb has heard rumors about the family his whole life, just like he's heard the rumors about a monstrous creature known as Catfish John living in the swamp.  When the Royce house burns down, Caleb's father—Lewis's sheriff—takes in the sole survivor, a young girl named Cere. Caleb quickly learns the truth about Archie Royce and the terrible fate he had planned for his daughter. After a woman is brutally murdered, Cere begins to suspect that not all of her family perished in the fire, and she and Caleb set out to stop her father's dark vision from coming to pass.  Years later, Caleb is the sheriff of Lewis, and the monsters of his childhood return. Now Caleb must fight to protect those he loves from Archie Royce's legacy, and his best hope may be a legend he's almost managed to convince himself never existed—Catfish John.

I've read a number of A.C. Wise's stories, essays and reviews and am continually impressed by the skill and thought behind her writing. From her gloriously queer science fiction tales in The Ultra Fabulous Glitter Squadron Saves the World Again to the chilling supernatural mystery of Catfish Lullaby, it's clear that you're reading an author who's going places and crafting terrific work. I can't wait for you to check out this book and get hungry for more. – Catherine Lundoff

There are stories about him along the Mississippi River from Cottonwood Point all the way down to New Orleans, maybe further still. Every place's got their own name for him—Wicked Silver, Old Tom, Fishhook—but where my people come from, smack dab in the middle of nowhere Louisiana, it was always Catfish John. Depending who you talk to, he's either a hero or a devil, one so wicked even hell won't take him.

—Myths, History, and Legends from the Delta to the Bayou (Whippoorwill Press, 2016)

Caleb lay facing the window, his grandmother's quilt pulled to his chin. From his position, he could just see the persimmon tree in the yard and, beyond it, the screen of pines separating his grandparents' property from Archie Royce's land. Back in the woods, past Royce's and where the ground started to go soft, Caleb's daddy—Lewis's sheriff—was leading a team to drag the swamp for a missing girl.

Caleb had heard Denny Harmon and Robert Lord talking about it at school. They were in first grade, but they'd probably both get held back, so Caleb would be stuck in the same class as them next year. Denny had said Catfish John took the girl.

"My cousin's friend was there. Catfish John came out of the swamp like a gator, mouth full of teeth. He grabbed her with his webbed hands and pulled her into the water."

Denny Harmon had grinned, looking like a gator himself, and looked right at Caleb.

"He probably killed her with a death roll and strung her up by her feet from the trees and slit her throat. He probably let her blood drain into the swamp to feed his catfish family."  Caleb hadn't run to tattle, but Robert held him while Denny punched him in the gut anyway, leaving him wheezing for breath.

"Catfish John likes sissy black boys best," Robert said, leaning close. "He'll leave us alone because we made it easier to catch you."

Mark, Caleb's best friend, found him after Denny and Robert left. Caleb's stomach hurt the rest of the day, but he still didn't tell. If Robert and Denny found out—and they would—it would only make things worse.

His stomach didn't hurt anymore, but he couldn't get Denny's words out of his head. His daddy was out in those woods. What if Catfish John got him? Even a sheriff with a gun could get eaten by a monster.

"I'm telling you who's responsible. Every damn fool in Lewis knows it 'cept nobody else is willing to do a thing about it." His grandfather's voice drifted under the bedroom door, interrupted by a nasty fit of coughing.

"Bet you he's awake anyhow." His grandfather chuckled, the rattling sound of his cough lingering.

Caleb started guiltily as his door opened, light from the hall spilling around his grandmother. It was too late to pretend he hadn't been listening.

He sat up, nodding, and she sat on the edge of his bed. Caleb was surprised when his grandfather followed her into the room, crossing to the window to look out toward the trees.

"Did Catfish John kill somebody?" Caleb glanced between his grandparents.

His grandmother's mouth made a little o, and the skin around his grandfather's eyes crinkled like it did when he was mad—usually at the government buying up timber from people's land without paying a fair price.

"Damn ghost stories." He rested a hand on the window sill. Faint light showed a white scar across the back of his left hand, running from the knuckle of his first finger down to his wrist below his pinky. "That's what keeps folks from going after him. They think old Archie'll put a curse on 'em. Just like his daddy."

He sounded like he wanted to spit. Caleb sat up straighter. Did his grandfather think Archie Royce had something to do with the missing girl? There were stories about him too, though not as many as about Catfish John. Gators as big as trucks were supposed to guard Archie's property, and on top of that, the land was haunted on account of some people Archie's granddaddy killed a long time ago.

"What makes you ask about Catfish John?" His grandmother put her hand over Caleb's, her papery white skin a contrast to his warm brown.

Her look flickered past him to his grandfather. She smiled, but the expression went thin at the edges.

"I heard . . ." Caleb hesitated. If he told his grandmother about Robert and Denny, it might get back to them. His grandmother and Robert's nana both got their hair done at Miss Linda's place after all.

"Just something I heard at school." Caleb shrugged,

"Well, I know a story about Catfish John too." His grandmother leaned forward like she was about to tell a secret, and Caleb looked up again.

"Don't go filling his head with more nonsense, Dorrie." His grandfather spoke without turning from the window. He sounded more tired than upset.

"Well." His grandmother glanced at his grandfather, daring him to interrupt. When he didn't, she continued. "When I was little, my mama told me about a man who lived all alone in the swamp."

"Why?" Caleb caught himself too late, but his grandmother didn't fuss at him for interrupting like she normally would.

She smoothed the quilt. That must be why she was letting him stay up late; she was worried too.

"No one knows. There are a lot of stories about Catfish John. Some folks say he was chased out of his home by people who thought he was a bad man. They wanted to hurt him, and he ran into the swamp to hide. Now when my mama's best friend was a little girl, she got lost in the woods and wandered all the way to the swamp. She nearly drowned, but whatever reason he had for being there, Catfish John saved her life."

"But if he saved your mama's friend, then he'd be . . ." Caleb couldn't even begin to guess at his grandmother's mama's age. "He'd be a hundred years old, wouldn't he?" He looked at his grandmother to see if she was fooling him or if she'd smack his bottom for being rude.

"Maybe." She smiled, surprising him, and Caleb didn't see any sign of a trick. By the window, his grandfather made a noise in his throat.

"Try to get some sleep, sweet pea. In the morning, I'll fix us all a big plate of 'nanner pancakes." She moved toward the door. "Come away from the window, Emmett. Your staring won't do any good."

His grandfather made another noise but followed his grandmother, closing the door behind him. Caleb tried to picture Catfish John saving a little girl. Maybe he'd help Caleb's daddy find the girl who was missing now. It was much a much nicer idea than the story Denny had told.

Caleb came awake to voices drifting from the hall, though he didn't remember falling asleep. Over the trees, the sky was a pearly grey. Not even dawn.

"No, but we found something else." Caleb focused in on his father's voice; he didn't sound happy.

"Might be Evaneen Milton, that girl down from Baton Rouge who disappeared six, seven years ago." His father's voice was rough with exhaustion. "There was barely anything left of her, but she had one of them medic alert bracelets."

"Oh, Charlie." His grandmother made a tutting noise. "Come on. I'll fix us some coffee." Their footsteps retreated down the hall.

Caleb sat up, fully awake now. They hadn't found the missing girl, but they'd found someone else, someone who'd gone missing before Caleb was even born. If that many people went missing in the swamp, maybe Denny was right after all. Maybe Catfish John did kill people, no matter what his grandmother said.

As he turned the thought over, a terrible sound split the air, echoing over the trees and making Caleb's skin pucker with goosebumps.

It was a snarling, wet sound. A scream that wasn't animal nor human but both. Like the swamp itself had found a voice, and it was angry that something that belonged to it had been taken away.