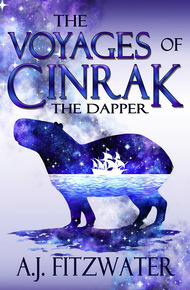 A.J. Fitzwater can be found living between the cracks of Christchurch, New Zealand. They survived the Clarion workshop in 2014, added two Sir Julius Vogel Awards to their shelf, and have gone on to have work published in Clarkesworld, Shimmer Magazine, Giganotosaurus, Beneath Ceaseless Skies, Glittership, Capricious Magazine, and other venues and anthologies of repute. Their WW2 NZ Land Girls shape-shifter novella "No Man's Land" will be published by Paper Road Press in early 2020. They Twitter at@AJFitzwater.

The Voyages of Cinrak the Dapper by A.J. Fitzwater

Cinrak the Dapper is a keeper of secrets, a righter of wrongs, the saltiest capybara on the sea and a rider of both falling stars and a great glass whale. Join her, her beloveds, the rat Queen Orvilia and the marmot diva Loquolchi, lead soprano of the Theatre Rat-oyal, her loyal cabin kit, Benj the chinchilla, and Agnes, last of the great krakens, as they hunt for treasures of all kinds and find adventures beyond their wildest dreams. Let Sir Julius Vogel Award-winning storyteller A.J. Fitzwater take you on a glorious journey about finding yourself, discovering true love and found family, and exploring the greatest secrets of the deep. Also, dapperness.

A.J. and I also met through the Outer Alliance, then met in person for the first time at Au Contraire. I've enjoyed reading A.J.'s short stories over the years, then fell madly in love with the Cinrak story that they sent me for Scourge of the Seas of Time (and Space). I asked if there could be more Cinrak stories and this lovely, joyous collection is the result. Reading Cinrak is like getting a big, fuzzy hug and I think these will be on my comfort read list forever. – Catherine Lundoff

Silence hovered in anticipation over the racers. The Moth Moon caressed the fairy-light-spangled podium with her gentle smile. The Paper Moon peered over the lavender horizon, knowing better than to risk rising on the night of sharp-edged falling stars. And the Silver Moon cut carefully undulating hills with slivers of brightness.

A barrel-chested capybara stepped forward from the petitioner's line. "Cinrak the Dapper, Captain o' the most excellent IRATE ship the Impolite Fortune, an' I ride in the Grand Chase of the Falling Stars fer the Queen's Paw."

A most satisfying gasp from the crowd of petitioners, court adjuncts, fairies waltzing the breeze, and rodent rabble.

"A capybara as the rat queen's consort?"

"There's a reason they say the sea-farer's union puts the 'IRATE' into pirate!"

Cinrak adjusted her purple bow tie, swinging her broad snout from side to side, trying to hold her grin in check. The court was all a-bluster? Good.

The Rat Queen Orvillia pressed her with her coal-dark eyes. The jewel at the centre of the Queen's crown throbbed, an ache against the festive mood.

This was the bargain they'd discussed, of a sort. Cinrak had promised to petition for the jewellery of Orvillia's well-adorned right forepaw, putting the orphanage of Cinrak's upbringing in the black and IRATE ships bound to pleasure cruises rather than duty for some star-turns to come. But promises were flexible, even to the head of the Independent Rodent's Aquatic Trade Entente.

A crackle-hiss, like lightning along a sword drawn from its scabbard. Cinrak turned her snout up. The stars were close; she could smell their light, fresh as a storm before it hit the sea.

With their attention caught by the busy sky, no one noticed a new petitioner step up until her sweet, high voice pierced the night.

"Loquolchi, Lead Soprano of the Theatre Rat-oyal, and I ride for the Queen's Paw."

"You blewdy diva," Cinrak grumbled. "Trust you to upstage everythin'."

Taking her place in line, the marmot graced her pirate lover with a toothy smile. "Can't let you have all the fun, Cinny."

"We had a deal," Cinrak hissed to Loquolchi as Orvillia swept forward and began reciting the rules of the Ride. "I'm doin' this for both o' us, Loqui."

Loquolchi looked off into the darkness like she was steadying herself to deliver a beloved aria. "I love Orvillia, too. Besides, a little competition is fun."

There was no stopping the hard-headed diva once she set her course. Cinrak straightened the hem of her tailored suit jacket and eyed Loquolchi's riding garb: a batwing dress straight out of the Rat-oyal costume department, all white froof and flop. Surely a tripping hazard.

Another crack-hiss. Cinrak, accustomed to listening for tiny changes of wind in the rigging, swung her blunt nose up. There. Way high, a tiny pinprick of a star against the bruised velvet sky

Ah! thought Cinrak. To be only the second rodent in history to capture and ride a falling star! Fame, riches, and the rat court would be there for Cinrak the Dapper's asking.