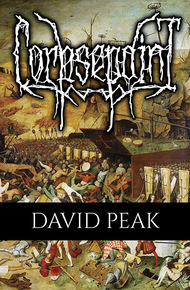 It's been years since the groundbreaking debut of black metal band Angelus Mortis, and that first album, Henosis, has become a classic of the genre, a harrowing primal scream of rage and anger. With the next two albums, Fields of Punishment and Telos, Angelus Mortis cemented a reputation for uncompromising, aggressive music, impressing critics and fans alike. But the road to success is littered with temptation, and over the next decade, Angelus Mortis's leader, Max, better known as Strigoi, became infamous for bad associations and worse behavior, burning through side-men and alienating fans.

Today, at the request of their record label, Max and new drummer Roland are traveling to Ukraine to record a comeback album with the famously reclusive cult act Wisdom of Silenus. What they discover when they get there will go far deeper than the aesthetics of the genre, and the music they create–antihuman, antilife–ultimately becomes a weapon unto itself.

Equally inspired by the fractured, nightmarish novels of John Hawkes, the blackened dreamscapes of cosmic-pessimist philosophy, and the music of second-wave black metal bands, author David Peak's Corpsepaint is an exploration of creative people summoning destructive powers while struggling to express what it means to be human.

If cosmic pessimism is your aesthetic, you'll want to check out Corpsepaint, where black metal musicians create weaponized music, told from an insider's voice. Ross Lockhart says, "A bleak ride with a violent, aggressive soundtrack, [but] there are moments of natural beauty and striking vistas that put the horror into stark and shocking perspective. Best read at maximum volume."

The dark streets of residential Kobylisy were quiet, still. He heard the barking of a dog in the distance, threatened and guttural, its fury joined by another, the vicious sounds tangling briefly, culminating in a wounded silence, a whine. Max knew of a place nearby where he could get anything he wanted, anything at all, just had to make nice with an old friend. He could buy a fucking mortar shell if he wanted to—he didn't doubt it—those old Soviet connections. This wasn't the slick and rigged endgame capitalism of the States, everything packaged up and made in China and boring, nope, not here. Here, things were still reeling from the sudden vacuum created by the Velvet Revolution. These people had been plagued by the slow and stupid rot of communism long enough to truly hate the free world, or at least resent it enough to blindly mimic it with little enthusiasm. And who could blame them? So much of what had happened here throughout history had been beyond their control, the fate of their lives merely the result of expanding and collapsing empires, the Holy Roman Empire imposing its will on all of Central Europe, arrogant kingdoms built on blood swamps, the eruption of violence caused by revolt, then the slow decay that sets in before collapse, and finally the arrival of Germany's horrific war machine during World War II, the city of Prague spared by Hitler's mania only because he considered it too beautiful to destroy.

Max came to a dark and narrow tenement house at the end of the street, tucked between a slick stone wall and a derelict store front, its windows boarded up and painted black. He knocked at the door, squatted down, and, speaking through the mail slot in his broken Czech, batted back the sluggish questions asked of him. A few moments later, the door swung open, giving way to a long, unlit hallway. The dreadlocked kid, sausage-fingered and pale-skinned, hopped off his shabby wooden stool and patted Max down, told him that he apologized, that he was a big fan, that it was just a formality, that Max and any of his friends were always welcome. At the end of the hallway was a steep staircase, and at the top of the stairs, another hallway. Max passed a few open doors, a few darkened, cavernous rooms, reeking of opium and sweat. The door at the end of the hall swung open as Max came to it, an aging punk in studded leather standing in the threshold, her head shaved, lipstick dark red—Agnes. She held a heavy chain in her hand, which was leashed to the collar of a stubby red-nosed pit. The dog watched Max closely with his yellow eyes as he stepped through the threshold, growled a low-down and menacing growl. Agnes bent down and stroked the dog's muscular shoulder, shushed him, "He is a friend," she said, smiling at Max. She nodded at the dog. "We were just about to go on a walk."

The room smelled heavy with mildew and the walls were covered in brightly colored peeling and torn posters for old punk shows, faded band stickers, poorly Xeroxed political flyers. There were no windows and not much furniture either, just a shitty couch draped with a knit quilt backed up into the corner, an old refrigerator, a CD player on a chair. A single naked bulb burned and buzzed in the center of the ceiling. Agnes's band had been practicing here for as long as he'd known her.

"You actually live here now?" Max said. He couldn't remember how long it had been since he'd been here. Ten years? Agnes was thicker around the middle these days, sure, and her clothes looked a little tighter, a bit ridiculous for her age, her makeup heavier, but she was still beautiful, there was no denying that.

Agnes shrugged, crossed the room, the silver ring piercing her septum glinting in the light. She tied the dog's chain to the radiator. Judging by the thick cross hatches of claw marks gouged into the faded wood floor, this was a regular practice. Max didn't see a food bowl or water dish anywhere. "Sometimes I live here," Agnes said. "Sometimes I don't. Sometimes I am living in the van. Other times the youth hostels even though I am not so young. It doesn't matter to me."

The dog slid to the ground with a heavy sigh, yawned, keeping its eyes trained on Max.

She looked at the dog. "He is bored with your questions." And then, "Sometimes he lives here. Sometimes he doesn't. We're all just coming and going." Agnes opened the fridge and removed two glass bottles of Coke, peeled off the caps with an opener screwed into the wall nearby, and handed one to Max. "You can relax. Your eyes give you away. Pyotr is in Moscow."

"No, not permanently. Is this what you came here for? To ask about Pyotr?"

Max took a sip of Coke, felt it pleasantly burn his throat. He held the bottle up. "This is what you guys worked so hard for? Tearing down your oppressors? To stock your fridges with this shit?" He took another sip. "Man, it is good, though."

Agnes ignored him. "I've read that you're going to Ukraine. That the mighty Strigoi will record an album with Wisdom of Silenus. Pyotr knows them, sells them things they need. He does not like them—says they are not good people. He believes Seph is dangerous."

Max sat down on the couch, the smell of dust rising all around him. "Pyotr would know, right? The fucking prick." He ignored that all-knowing look on her face. "It doesn't matter if they're good people or not. I don't care about that. They're the only people left who are making the kind of music I want to make. Real black metal. I know that sounds stupid. Don't look at me like that. You make fucking punk music, so what the fuck do you know?"

Again, she shrugged. "Nothing much, I guess. I know how to make power chords. Scream about Ronald Reagan, tanks rolling down the street. That's all that punk music is to you, right?"

He took down half the Coke in two, three gulps, felt it fizz up in his mouth, push out and slide down his chin. His eyes watered from the pleasant, fizzy burn. He wasn't used to drinking shit like this. "You know," he said, "this room was the first place I ever shot heroin."

Max thought about this for a few moments. She was right, of course. She knew that he couldn't let go of the way things were. But all of that was over. That's why he was here. He was taking the next step, moving on. Fuck those first three albums. He was going to make something new, something real. The fizz from the Coke made him feel light headed. He wondered if he might actually be drunk. It was difficult to tell sometimes. It didn't matter. What mattered was the sickness and the sickness was becoming difficult to ignore. "I puked all over myself," he said. "The first time I shot up. Threw up and passed out."

"You're much stronger now," she said.

"That's one way of looking at it."

"They murdered their drummer, you know."

"Wisdom of Silenus. Their drummer Falchik. He disappeared. The rumors go that they stabbed him and buried him in the woods. Of course, no one has seen anything, no one knows who did it. No one knows anything. And so it remains a mystery. Pyotr thinks that it was Seph who put the others up to it."

"Why would she do that?"

"Drugs. Seph likes to keep the compound clean and apparently this Falchik was bringing in drugs. Well, Seph didn't like that too much."

Max felt his pulse quicken. This last detail made him a bit nervous. He'd have to kick the shit before they left Prague. Shouldn't be too hard—there was still plenty of time. Maybe he could even wait until they left Bucharest. He'd done it before, he could do it again.

Agnes came over and sat down on the couch next to Max. She lit a cigarette and sat and smoked. Then she reached over and slid her small hand into his, surprising him. Her nail polish was chipped. She had a crude tattoo of a spider in the webbing between her thumb and first finger. "I'm happy you are here," she said. "I'm surprised to hear myself say this—but it's true. Seeing you brings back many happy feelings. And later, you'll leave, go to the next city, and meet up with another woman from your past, and it will be like this never happened."

"No, not such a bad thing at all. Easier maybe."

Across the room, the red-nosed pit was lying on its side, snoring softly. Agnes looked at the dog with a fondness that Max found weirdly beautiful. She'd looked at him like that once, years ago. He still remembered.

"Are you holding?" he asked.

She turned to him and smiled. "So that's why you're here." She exhaled her smoke and—just barely, in a manner perhaps apparent to only those who knew her best—shook her head with disappointment. "I should have known."

"You have no one to blame but yourself."

"You always did like to blame the victim." She looked him in the eye. "Max, you must promise me that you will be careful. You don't know Seph. You don't know any of these people. They are dangerous."

"Well then maybe I should check out the armory," he said, "see what Pyotr has in stock. Maybe get something to defend myself, you know?" He grabbed her wrist. "But first I wanna get fucked up."

"And make sure it's strong shit," he said. "After all, it's just like you said. I'm much stronger these days."