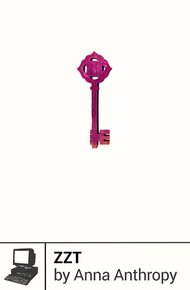 In 1991, long before Epic Games was putting out blockbusters like Unreal, Infinity Blade, and Gears of War, Tim Sweeney released a strange little MS-DOS shareware game called ZZT. The simplicity of its text graphics masked the complexity of its World Editor: players could use ZZT to design their own games.

This feature was a revelation to thousands of gamers, including Anna Anthropy, author of Rise of the Videogame Zinesters. ZZT is an exploration of a submerged continent, a personal history of the shareware movement, ascii art, messy teen identity struggle, cybersex, transition, outsider art, the thousand deaths of Barney the Dinosaur, and what happens when a ten-year-old gets her hands on a programming language she can understand. Well not everyone has played ZZT, but everyone who played it became a game designer.

It's been said that the first Velvet Underground album sold only a few thousand copies, but that everyone who heard it formed a band. Well not everyone has played ZZT, but everyone who played it became a game designer, as this latest tome in the Boss Fight Books series explores.

Anna's second inclusion in a StoryBundle is with another Boss Fight Books tome, this one a wonderfully researched paean to ZZT, Tim Sweeney's PC game turned game construction kit. Incredibly formative in many game creators' lives, it's also a piece of culture that yearns to be documented - something Anna has done wonderfully. – Simon Carless

I must have been nine or ten.

There was a flea market at my school—the cavernous gymnasium packed with vendors, tables, booths. The man tending the software booth was old, white, and white-haired. He probably was not humming the lyrics to Led Zeppelin's "Stairway to Heaven," but since I don't remember, let's agree that the possibility exists, for the sake of thematic connection.

His display bristled with little plastic packages, squat rectangular envelopes, shiny as beetle wings. Beneath the plastic, each held a card with a single still image of some weird pixel elseworld, along with a bunch of text for which I had no context—the name of the game and its publisher, none of them recognizable.

Having already encountered Ms. Pac-Man, Missile Command, Asteroids, and Super Mario Bros., I recognized these curiosities before me as games: They had that blocky abstraction that suggested they weren't merely images but icons, characters in some arcane, magical language.

So they were games. For the computer? My parents had bought a computer recently, a desktop with Windows 3.1 installed. I was awful at the one game I'd found on it that wasn't a card game, the one where a mouse tries to trap cats by pushing blocks around. If you gave a cat a single opening, you were fucked.

I had the vague sense that the computer spoke the same language as the games I had played on my dad's Atari and Nintendo (later my Nintendo), that if I pressed the right button I could make it speak to me too. But I never found the button.

I went home with the plastic package that leapt out as the most colorful: concentric rings of polka-dotted greens and blues, lines of bright crimson on purple, a plump white smiley face beaming from the center. The label said, "Super ZZT, Potomac Computer Systems."

This was actually, I would learn much later, a mislabeling: Super ZZT was a spin-off, a sequel, and the picture on the card was of "Monster Zoo," one of the three Super ZZT games. What was in the package was not Super ZZT, nor was it Monster Zoo.

What was in the package was a 3.5-inch floppy disk, a flat, square thing, much thinner and more easily broken than the fat Atari cartridge Missile Command came on. I took it home and put it in my computer. I probably negotiated a lot of confusion about running the program, installing, booting into DOS, and pointing DOS to C:\ZZT.

Soon I was looking at the title screen for:

Under the title, a weird bestiary: little red things dancing around inside a box marked "Lions," flat blue tables shifting restlessly in a box called "Tigers." And then, promisingly, "Others," a collection of weird shapes in different neon colors that simply sat there, inviting me to wonder what they could possibly be.

I was already enthralled.

How Do You Pronounce "ZZT" Anyway?

Zee Zee Tee, the phonetic reading of the characters? So it's an acronym then? What does ZZT stand for? I heard at some point that it stood for "Zoo of Zero Tolerance," and that made enough sense, what with the Lions and the Tigers. But no, that name was suggested by a dude named John Beck in ZZT's official, short- lived newsletter.

In an interview with Gamasutra in 2009, Tim Sweeney said it was supposed to be pronounced as written, "ZZT!" Like "the cartoon sound effect." Bam! Ka-pow! Vronk! ZZT! The sound of a Batman villain getting shocked with electricity.

In actuality, the name was chosen for almost the same reason that my town of Oakland's "Aardvark Laser Engraving" had chosen its name. Sweeney named the game "ZZT" so it would always filter to the very bottom of alphabetical listings on BBSes and shareware CDs.

The internet didn't exist in the early 1990s, or at least wasn't widely available. My family's computer came with something called Prodigy. It worked like this: Our computer had a cable that ran to the house's phone line, all the way across the house—descending from the computer in the living room, sneaking along the back wall of the dining room, crawling across the kitchen doorway, and finally climbing up into the phone receiver. If you picked up any phone in the house while someone on the computer was logged into Prodigy, all you'd hear was this terrible machine screech.

There were also Bulletin Board Systems (BBSes)— different than Prodigy, but similarly dependent on the phone line—that you could dial into if you knew the number. It was like calling any phone number—which at this time meant that calling any number outside of your own area code counted as "long distance" and cost a lot of money. Consequently, most BBS communities were local.

Many BBSes hosted downloads of games. Downloads were slow through phone lines, but it was a place for a developer to share their game and have people download it—maybe upload it somewhere else if they thought it was worth sharing. Popular games could cross an entire region, could creep across the country.

It was natural that some authors wanted to hear back from some of the strangers on the other side of the country who had discovered their games. Send me a postcard of your town, they'd say. I collect them. Naturally, others thought to ask for money—a tip, if you like the game. But then developers realized they could offer incentives for "registering" shareware.

Send me fifteen bucks, and I'll mail you a code to remove the five-second-long screen that asks you for money each time you start the game. Or one that unlocks extra features, like the two-player version! See past level three! Maybe I'll send you an updated version of this new game I've been working on.

In 1987, Scott Miller founded Apogee. Their scheme: They would develop episodic games. The first episode in a series was free—you were invited to download it from a BBS, upload it to other BBSes, and give copies to friends. If you or any of your friends wanted the rest of the series, though, you'd have to pay. For Episode 2, 3 or 4, $9.95 each. Or buy the complete series for $20 and save!

When Tim Sweeney decided to sell the little game he'd been working on after school, it was this episodic model he emulated. The first game in the ZZT series was Town of ZZT—that's the shareware episode. If you sent some money—$8 per volume or $24 for all three—you could buy Caves of ZZT, Dungeons of ZZT, and City of ZZT (and, later, once ZZT was a success: Best of ZZT, ZZT's Revenge, and Super ZZT). He sent out hand-drawn maps and a hint guide with each order.

Version 2.0 of ZZT by Potomac Computer Systems ends with the following message from Sweeney, replaced in later releases with a sales pitch and ordering information:

We're trying to distribute ZZT as widely as possible, but without your help, we won't be able to reach the:

dors in the world.

¥Over 600 User Groups across the country.

¥More than 15,000 Bulletin Board Systems

(BBSs) available to the public.

So help us out! If you do nothing else, please see that this software gets CIRCULATED! We would like to see copies of ZZT reach all of the 50 states, and then the rest of the world!