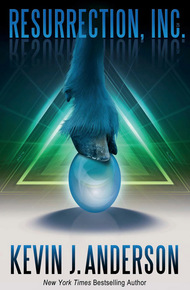 In the future, the dead walk the streets—Resurrection, Inc. found a profitable way to do it. A microprocessor brain, synthetic heart, artificial blood, and a fresh corpse can return as a Servant for anyone with the price. Trained to obey any command, Servants have no minds of their own, no memories of their past lives. Supposedly.

Then came Danal. He was murdered, a sacrifice from the ever-growing cult of neo-Satanists who sought heaven in the depths of hell. But as a Servant, Danal began to remember. He learned who had killed him, who he was, and what Resurrection, Inc. had in mind for the human race.

Kevin J Anderson once burned a story of mine. That’s true. It was my Writers of the Future Award winner. I like to think it was a matter of survival for him. We’ve since collaborated on Tau Ceti, which won the Lifeboat to the Stars Award, and share a common love of Rush. He’s frequently taunted me with photos of Neil Peart and soundchecks for Colorado shows. I still think of him like a brother, despite all that. Resurrection Inc. was one of the first books of his I read, and has a special interest for all Rush fans, too. – Steven Savile

The two Enforcers found the dead man in the street, long after curfew. The city’s night hung around them, tainted with a clammy mist caught between the tall and dark buildings. The smell of fresh blood, smoke, and the sweat of close-pressed bodies drifted upward into the air.

The slain man was naked, spread-eagled inside a geometrically perfect pentagram drawn in blood. At each of the five corners of the pentagram burned candles of black paraffin, made to look archaic with artificially molded runnels of wax along the sides. A wide knife wound hung cleanly open in the center of the victim’s chest, like an appalled extra mouth.

With a throb of its rear jets, the Enforcers’ armored hovercar descended to the flagstones. As the engine purred its way into silence, Enforcer Jones, a tall and thin black man, emerged from the craft. He hung back uneasily, remaining near the hovercar. “Neo-Satanists again!” he muttered under his breath.

The other Enforcer, Frampton, agreed. “Yeah, they give me the creeps.” Belying his words, he went eagerly forward, amused and confident.

Weapons bristled from pockets and holsters on the Enforcers’ white body armor; tough helmets with laser-proof black visors covered their faces. In the mercifully brief four weeks Frampton had been assigned to him, Jones had never seen his partner’s face, yet somehow he imagined it would wear a stupid boyish grin, maybe some scattered pimples, maybe curly hair. Frampton seemed to think all this was fun, a game. It didn’t matter, though—they weren’t friends, nor would they ever be. Other Enforcers had a real camaraderie, a team spirit. But this would be Jones’s last night patrol anyway.

“Think I should put out the candles?” Frampton asked.

Jones moved away from the hovercar, shaking off his revulsion of the pentagram, the blood sacrifice. “No, I’ll do it. You see to his ID.”

Frampton retrieved some equipment from the hovercar while Jones stepped forward, methodically squashing each of the five black candles with the heel of his white boot. In the distance, through gaps between the massive squarish buildings, he could see the running lights of another patrol car moving in its sweep pattern.

Frampton made a lot of unnecessary noise as he carelessly tumbled equipment onto the flagstones within the pentagram. He picked up one of the scanner-plates and pushed it flat against the dead man’s palm. The optical detectors mapped the swirls and rivulets of the man’s fingerprints, searching for a match in the city’s vast computer network.

“Nothing on the Net about him.” Frampton double-checked, but came up with the same answer again.

“Ever wonder how the neo-Satanists manage to get people who aren’t even in the databases, every time? Weird.” Frampton sounded breathless. He was always trying to make conversation. Always.

Jones turned an expressionless black visor toward his partner for a long and silent moment. He wanted to act cold, wanted to be gruff with the other Enforcer. It was too late to make friends now—better just to keep up the act for one more night. “How do you know they don’t just alter the data on the Net?”

Frampton considered this in silent amazement. “That would be awfully sophisticated!”

“Don’t you think this is sophisticated?” Jones jabbed a hand at the body, the candles, the pentagram. “Enforcers sweep this area every five minutes after curfew. You know how strict it is, how closely patrolled—and the neo-Satanists still managed to get him out on the street, draw the pentagram, light the candles, and then vanish before we could get here.”

Only members of the Enforcers Guild were allowed on the streets of the Bay Area Metroplex between midnight and dawn. Jones didn’t fully understand the actual reasons for the curfew—he’d heard rumors of a war taking place somewhere, but he had yet to see any signs of battle. Other, more sensible people cited the occasional violent riots caused by angry blue-collars who had been displaced from their jobs by resurrected Servants.

Jones himself had participated in some of the mock street battles staged by the Guild after dark. Nobody really got hurt—the damage usually included no more than a few blasted palm trees, a handful of scorched tile rooftops, and plenty of noise in the streets. But it all sounded terrible and dangerous enough to the general public huddled in their living quarters that they would always feel grateful for the protection the Guild offered. Besides, it gave all the Enforcers something to do.

Earlier in the night, Jones and Frampton had captured a chunky Asian man cowering under the overhang of a darkened business complex. The man had been trying to hide, not knowing where to go—as if he had a chance of avoiding the Enforcer sweeps.

Frampton had pulled out two of his weapons and started toward the unfortunate man, but Jones restrained his partner and listened while the chunky man babbled an explanation. He and his wife had argued, and he had stormed out of their apartment, either forgetting about the curfew or not caring. New his wife wouldn’t let him back in, and the man had been trying to stay out of sight until dawn.

Sheepishly the Asian man keyed his password into the Net terminal mounted in the armored hovercar; his ID checked out.

“You know what we have to do now,” Jones said from behind his visor.

The man swallowed and hung his head in dejected horror. “Yes.”

“All your Net privileges are revoked for a week. Sorry. Curfew is curfew.” The Asian man sulked behind the restraining field in the back of the hovercar while Jones and Frampton escorted him home.

Without the Net recognizing his identity, the man would effectively be a non-person for an entire week: he would not be able to buy anything, make person-to-person video or voicelinks, call up entertainment, or even enter his own home unless someone else let him in.

The man’s wife looked frightened but not surprised when the Enforcers arrived to escort her husband back into the dwelling; she didn’t look pleased to see him, and the prospect of having to do everything herself for the next seven days seemed to make her angrier yet.

Back at the murder site, Frampton opened the refrigerated, airtight compartment in the rear of the hovercar and then returned to the slain man in the pentagram. “Give me a hand here?”

Jones bent to take the body’s cold, naked feet while the other Enforcer gripped the dead man tightly under the armpits. Jones could feel the rubbery flesh of the victim’s ankles even through his flexsteel-mesh gloves.

Frampton made a deprecating snort as he looked at the mouthlike wound in the dead man’s chest. “Well, it’s off to the factory for you, my boy. I bet you’re going to miss all this excitement after your transfer, Jones.”

Transfer generally equated with punishment in the Enforcers Guild, and Jones had screwed up several days before, during a rare daytime stint on the streets. He had frozen for a moment, let his conscience whisper a few words in his ear, when he had seen a rebel Servant break from her routine and run.

All Servants were reanimated corpses, dead bodies with micros processors planted in their brains to make the bodies move again. This allowed them to walk and talk and do what they were told. It was much cheaper than manufacturing androids from scratch to do menial and monotonous tasks.

But despite her shaved head, the lifeless pallor of her skin, and the gray jumpsuit-uniform all Servants wore, Jones had difficulty convincing himself that the rebel Servant wasn’t human, that she was already dead and merely reanimated, that she didn’t matter.

The Enforcer found the Guild’s reprimand ironic: Starting tomorrow, Jones would be switched from his easy post-curfew beat to full-time service at Resurrection, Inc., where he would escort newly resurrected Servants to their assignments.

Well, at least it would get him away from Frampton and his constant inane chatter.

They placed the slain man in the back compartment of the hovercar, folding his arms and legs to fit him into the cramped space. Holding a miniature Net keypad in his hand, Frampton punched in data about the discovery. “Verify cause of death,” Frampton said. “Single wound, no other apparent bodily damage, no identity information on the Net.”

Jones glanced at the wound in the man’s chest. “Concur.”

Frampton dropped his voice slightly. “Man, I hope that never happens to me.” Because of the dark visor, Jones could read no expression on his partner’s face.

Jones closed the compartment and set the controls for quick-freeze. A hissing noise filled the air. He knew exactly what Frampton meant, but he asked anyway, “What? You don’t want to be a neo-Satanist sacrifice, or become a Servant?”