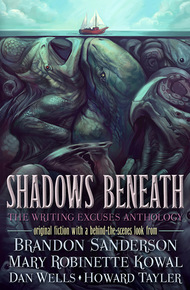 Dan Wells is the author of the Partials sequence, the John Cleaver series, and the upcoming Mirador series. He was nominated for the Campbell Award, and with his cohosts has won three Parsec Awards as well as a Hugo Award for the Writing Excuses podcast.

Mary Robinette Kowal is the author of the Glamourist Histories series beginning with Shades of Milk and Honey and most recently continuing in Valour and Vanity. A winner of the Campbell Award and multiple Hugo Awards, Mary is a professional puppeteer and also performs as a voice actor and audiobook narrator.

Howard Tayler is the writer and illustrator behind the comic strip Schlock Mercenary. Howard has also written for the Space Eldritch anthologies and Privateer Press's Skull Island X imprint. His most recent printed work is Schlock Mercenary: Longshoreman of the Apocalypse, which was nominated for a Hugo Award.

Brandon Sanderson's Cosmere includes the Mistborn trilogy and the Stormlight Archive, with Words of Radiance a #1 New York Times bestseller and novella The Emperor's Soul winning the Hugo Award. He concluded Robert Jordan's Wheel of Time with A Memory of Light. Recent YA novels are Steelheart and The Rithmatist. Brandon teaches creative writing at Brigham Young University.

Shadows Beneath: The Writing Excuses Anthology gives an unprecedented peek behind the curtain at the process of creating fiction, from start to finish. For years the hosts of Writing Excuses have been offering tips on brainstorming, drafting, workshopping, and revision, and now they offer an exhaustive look at theentire process. Not only does Shadows Beneath have four beautifully illustrated fantastic works of fiction, but it also includes transcripts of brainstorming andworkshopping sessions, early drafts of the stories, essays about the stories' creation, and details of all the edits made between the first and final drafts.

The Writing Excuses podcast, hosted by my friends Brandon Sanderson, Howard Tayler, Dan Wells, and Mary Robinette Kowal won the Hugo Award and is one of the best writing podcasts out there. This book is a special treat: not only is it a collection of terrific stories (writers are readers, too), but the writers also pull aside the curtain to show the actual “sausage making” behind each story, the notes, the development, the drafts, the changes. It’s hardcore nuts-and-bolts information that all writers should study. – Kevin J. Anderson

You hold in your hands one of Brandon Sanderson's patented Crazy Ideas™.

It started about two years ago. For those who don't know, Writing Excuses is an internet radio program that I cohost with the other wonderful people whose names you can find on the cover of this very volume. We offer writing advice from professionals.

I'm always searching for ways to make Writing Excuses more relevant and interesting. I want to try things we haven't tried before—and, if it can be done, things that nobody has ever tried before. This was one of those ideas. I wanted to brainstorm a story on one episode, write that story, then provide it for everyone to read afterward.

The idea took hold, and I pitched it to the team, suggesting that we each brainstorm a story together, then write it. We could workshop each story on another episode, then release an anthology with both the first drafts and the final drafts, giving readers and unprecedented look at the process of creating a story.

Now, I fully understand that many of you aren't writers yourselves and may not be interested in all of this. If that's you, feel free to skip the rest of this introduction and dive right into the stories! They're right up front, in their polished and final revisions, gloriously illustrated by talented artists we commissioned for each story. (And while we're on the subject of the art, have another look at that awesome cover by Julie Dillon. She's up for a Hugo Award this year in the Best Professional Artist category, and she heartily deserves your consideration.)

I recommend each story to you, particularly those by my cohosts. They're some of the finest pieces I've read this year, and I think their quality will speak for themselves. Go forth and enjoy!

For those of you who are interested in the writing process, whether you be an aspiring writer yourself or just someone who likes pulling back the curtain and looking at the guts of something, I have a real treat for you. After the polished stories (which I still suggest you read first) you'll find a wealth of bonus material, presented in a separate section for each individual story. These sections include the following for each story.

Original brainstorms: We have transcribed here for you the original brainstorming session, as we recorded it on-air, cleaned up a bit and streamlined so you can read over the conversation that inspired the story in the first place.

First drafts: We have included each original draft, which in some cases is wildly different from the final story.

Edits documents: Perhaps the most interesting, we've taken each story and merged the first and final drafts, putting a strikethrough on each word cut and an underline on each word added. This will look a little messy at first, but as you adjust to the notations, you can see exactly what was removed and what was added, allowing you to compare the drafts in a cool way.

However, if all that weren't enough, the anthology also contains the following items for some of the stories.

Essays on Writing: Dan, Howard, and I wrote up essays about the writing process—with our own story specifically in mind. (Mary was in the middle of a rigorous book tour when we decided to write these.)

Bonus goodies: I included my writing group's comments for my story. (I workshopped it there after doing so with the Writing Excuses team, as I still couldn't figure out my ending.) Howard did us an awesome cartoon. Dan and Howard not only gave us first and last, but an interim draft of their stories, for an extra look at the process.

Overall, this anthology is stuffed full of extra material, hopefully achieving my goal of giving you a look at the process of story generation from start to finish.

I'm extremely proud of what we've done here. I don't think there's anything quite like it on the market. However, the real bonus is how well each story turned out. Thanks so much for reading, listening, and supporting us.

Anyway, you're out of excuses.