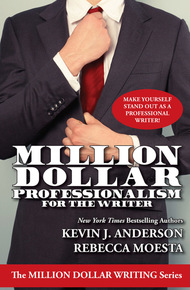 Kevin J. Anderson has published over 125 books, more than fifty of which have been national or international bestsellers. He has written numerous novels in the Star Wars, X-Files, and Dune universes, as well as a unique steampunk fantasy novel, Clockwork Angels, based on the concept album by legendary rock group Rush. His original works include the Saga of Seven Suns series, the Terra Incognita fantasy trilogy, the Saga of Shadows trilogy, and his humorous horror series featuring Dan Shamble, Zombie PI.

Rebecca Moesta (pronounced MESS-tuh) wanted to be an author since her early teens, but it wasn't until 1991 that she began writing in earnest. Her solo novels include Buffy the Vampire Slayer: Little Things (2002) and three novels in the Junior Jedi Knights series. With her husband, Kevin J. Anderson, she wrote the Crystal Doors trilogy, the movie novelization of League of Extraordinary Gentlemen under the pseudonym "K.J. Anderson" (2003); a movie novelization of Supernova (2000); a novelization of the popular StarCraft computer game StarCraft: Shadow of the Xel'Naga, under the pseudonym "Gabriel Mesta" (2001); and a Star Trek graphic novel, The Gorn Crisis (2001). The team, currently working on Star Challengers, a Young Adult science fiction series, has also written two young adult Titan A.E. novels (2000), two high-tech Star Wars Pop-up Books, and the 14-book Young Jedi Knights series of Star Wars novels.

Together, they are the publishers of WordFire Press.

Since the 1990s, bestsellers Kevin J. Anderson and Rebecca Moesta have helped thousands and thousands of writers to develop the mindset of career professionals.

Million Dollar Professionalism for the Writer presents lessons learned from the authors' decades of experience in publishing. They offer advice on working with publishers, editors, booksellers, and fellow authors, and using persistence and reliability to find continued work in the industry.

Their tips cover professional courtesy, building a network of colleagues, reading contracts, meeting deadlines (and the domino-effect consequences of missing them), dealing with critics, and how to earn and maintain a reputation as a true professional.

When seeking advice, always consider the source. Many self-appointed "experts" write how-to books without themselves ever accomplishing the thing they are trying to teach you how to do.

In the Million Dollar Writing Series, each of our authors has sold a minimum of one million dollars of commercial product in their field. They have proved themselves, and here they share their wisdom, advice, and experience with you.

There are many factors in becoming a successful writer, and we cannot guarantee that you'll break into the top levels, but we hope you find the advice to be useful and enlightening.

For more than two decades, Rebecca and I have given a detailed workshop on “Things I Wish Some Pro Had Told Me When I Was Starting out.” How to have a professional mindset, how to act professionally as a writer, and how to be considered a “keeper,” somebody a publisher wants to work with. When Mark Lefebvre of Kobo begged us to put down those lectures into permanent form, we finally had the idea, and impetus, to write the book. We think all NaNoWriMo participants will get something solid from this. – Kevin J. Anderson

When you see a doctor, lawyer, banker, or business executive, you expect certain standards—that they are mature, reliable people you'd want to do business with.

You've probably seen writers portrayed on TV or film as eccentric, ditzy, pompous, or curmudgeonly, as if that's the norm for a writer. They shrug. "Eh, creative people. What can you do?"

You can be professional.

When Kevin sold his first novel in 1987, he received an author questionnaire from the publisher's publicity department, asking about his interests, his areas of expertise, and his background in doing interviews and public appearances. Before the publisher turned him loose on book signings or set up media interviews, Kevin naïvely assumed that someone would train him. Since the publisher had a vested interest in their author making a good public impression, shouldn't they go over a list of guidelines or standards of behavior to make sure he was ready for prime time? After all, as an author representing their publishing company, he had their reputation as well as his own on the line. Surely they gave their authors some kind of code of conduct to keep them from shooting themselves in the foot, putting their foot in their mouths, or any other foot metaphor you prefer. When he asked about it, they told Kevin, "You should just know what to do."

Unfortunately, many authors have no idea what to do.

After a successful career spanning more than a quarter of a century, with over 125 books published and 50+ national or international bestsellers, Kevin has spent a lot of time learning how to be professional.

He and his wife Rebecca—also an award-winning and New York Times bestselling author of dozens of books—have given lectures and workshops for thousands and thousands of writers.

They have presented their seminar "Things I Wish Some Pro Had Told Me When I Was Starting Out" for two decades, often to standing-room-only crowds.

Finally, they decided it was time to put that information in writing. The need for business knowledge and professional behavior is greater than ever. With more authors choosing the indie publishing route, they are forced to be front and center—producing and promoting their books, meeting fans, talking to bookstores. No longer can socially inept authors safely tuck themselves away in a cabin so they can write, while someone else does all the legwork.

With the explosion of social media, blogs, and discussion boards, where writers have direct interactions with readers—not to mention the potential for unfortunate flame-wars—it is imperative that writers learn to be professional, to stand out above the crowd of amateurs and be taken seriously.

The authors hope this book helps. They'll be watching.

Part I - The Professional Mindset

Writers aren't always dazzling socialites or the life of the party. In fact, writers tend to be more reclusive than average, maybe even a bit eccentric. They commute to fictional worlds for their daily work, and hang out with imaginary friends.

In the real world, though, a professional writer needs to adhere to certain basic social standards—such as grooming and hygiene. Don't laugh: we wouldn't be saying this if we hadn't met so many counter-examples.

If you're going to be in public, meeting editors, authors, and readers, follow these rules:

¥Look like someone an editor would want to do business with

Each time you talk to an editor or a publisher, whether it's at a cocktail party, on a panel, at lunch, or just chatting in the hall, think of it as a job interview. Yes, the vintage Star Wars t-shirt that you bought at the original showing of the film back in 1977 might be your favorite shirt, but—be honest with yourself—it's been laundered too many times and doesn't really fit all that well anymore. No, you don't have to wear a business suit (most authors don't), but at least look professional.

When an editor talks to you, she will form an immediate assessment from your first impression. Is this a person I can rely on? Will this author deliver a book on time, as contracted, handle herself well in interviews, and appear at bookstore after bookstore without annoying the managers or customers? Is this somebody I want to work with?

In public, Kevin generally wears a nice sport jacket, dress shirt, slacks, no tie (it's a challenge for him even to remember how to tie a necktie). It's a look that Rebecca has developed and cultivated for him, and it works.

When I attended my very first swanky Nebula Awards ceremony in Oakland, California, I was seated at a table with a dashingly dressed Robert Silverberg and a similarly tuxedoed Dan Simmons. Much to my embarrassment, I actually did wear that old and faded Star Wars t-shirt mentioned above—and stuck out like a sore thumb. I looked like an amateur.

That was not the impression I wanted to make when sitting next to the titans of science fiction and fantasy.

You might want to think through your branded look, though, before you choose something particularly elaborate. Bestselling dark fantasy author Sherrilyn Kenyon showed up at a large convention in a lovely crushed-velvet dress, corset, top hat, and gloves which gave her a beautiful steampunk appearance… in supremely humid and hot Atlanta in August; she told us she never wanted to do that again.

When you speak on stage or in public, even in hallway conversations, people will expect that a writer has a certain command of the language. Be articulate. Use complete sentences. When people hear you talk, they should want to read your books.

You don't have to be prissy and erudite Professor Higgins from My Fair Lady, but you probably don't want to curse like a drunken sailor either—unless that's the brash, edgy image you're trying to project. (Even so, the longevity of brash, rude, in-your-face authors doesn't tend to be great.)

The same goes for online interactions. When people read a posting you made, they should not roll their eyes at poor grammar, sloppy spelling, or frequent typos. Instead, they should be impressed with how interesting you are, so they will want to seek out your blogs, articles, stories, or books.