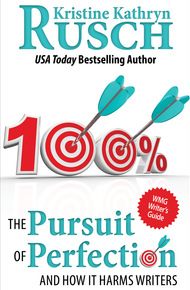 In this WMG Writer's Guide, international bestselling author Kristine Kathryn Rusch discusses the destructive ways peer workshops and the quest for perfection derail many writers' careers. Listening to critics and academics—amateur and professional—often strips out the joy of writing. And a failure to recognize writing as a business furthers the potential damage.

But Rusch offers hope for writers who have suffered at the hands of critique—external and internal—and outlines a path to healing.

Kris Rusch is a prolific writer, but she’s also won mountains of critical acclaim and tons of awards. She’s in the same boat I am: people tend to think that anyone who writes fast can’t possibly be good. But Perfection can be a great enemy of the writer, strangling your ability to get excellent work out. She’s figured out the balance. – Kevin J. Anderson

In the summer of 2012, I taught a class for professional writers in the short story. You'd think that pros would already know how to write a short story, but many of them do not. It's a separate art form from novels, and it requires different attitudes.

That workshop reminded me, as every craft workshop I teach does, how destructive the modern teaching techniques are for fiction writers. Most never make it through the classes or peer workshops. Most wannabe fiction writers give up their dreams after one semester of a creative writing workshop or table their first novel after it goes through a rigorous critique.

I spend most of my time in the craft workshops that I teach repairing damage done years, sometimes decades, earlier. That damage isn't deliberately malicious. It comes from the assumption that perfect stories not only exist, but can be revised into existence.

That assumption is not only misguided; it's destructive. And I hate seeing what it has done to generations of writers.

I write a nonfiction blog on my website www.kristinekathrynrusch.com every Thursday. After I finished that June workshop, I blogged about the wrong-headed notion of perfection, and received hundreds of comments in response. Those commenters asked questions, of course, but they also gave their stories. Many of those stories ended with "and that's when I gave up on being a professional writer" or some similar sentence.

My heartbreak increased. I answered a lot of those comments on-site, but they inspired me to write two more blog posts and do some digging into the history of peer workshops.

By peer workshops, I mean those workshops in which everyone, from the professor (or editor or writer-leader) to the unpublished students, gets to weigh in on the manuscript before them. Many of these workshops have a no-holds-barred policy: the critiquers can say whatever they want as meanly as they want and at whatever length they choose. I've personally heard critiques from beginning writers, wannabe writers, and writer-hangers-on (who have never written a word, but say they will) that have lasted 20 minutes or more, often on stories of less than 3,000 words.

Someone might say something positive about the work, but the writer never remembers that. The writer remembers the excruciating evisceration of a fledgling story that seemed to go on forever.

So if traditional peer workshops and the quest for perfection damage a writer, what will help them?

I explore all of that in this short book. It's an edited version of all three blog posts. I left some of the immediacy here, because there is a lot of raw material. If you want to see the comments, go to my website, click on The Business Rusch tab, and hit the link for the post called "Perfection." Read the comments there, and on the next two posts.

If I don't convince you that this method of teaching writing is seriously flawed, then maybe the commenters will.

For those of you who have suffered damage in a quest for perfection, I hope this short volume helps you on the road to healing. I hope the rest of you find something of value here as well.

Whatever you think of this short book, please realize that I wish you the best in your writing endeavors.