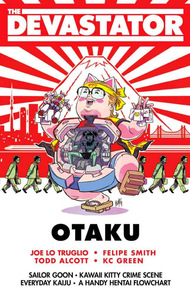 The Devatator: Otaku by The Devastator

The Devastator: Otaku dubs the world of anime culture a new one. We imported over 9000 parodies of Sailor Moon, Inuyasha, Phoenix Wright, Hayao Miyazaki and more! Featuring contributions from Joe Lo Truglio, KC Green, Todd Alcott, and a mecha-hilarious cover by Felipe Smith. Flip the book around for Dick Note, a magic notebook that allows you to dick over anyone whose name you write on its pages. Yatta!

We assembled hilarious anime parodies together, kind of like how robot lions come together to form a Voltron. By the way, we call the head. – The Devastator

JUDGE HARRIS: Okay, we are reconvening from our afternoon recess to continue in the case of Columbia Sportswear Company Versus Sun Microsystems. Attorneys present are Donald Fisher for the plaintiff, and Phoenix Wright for the defense. The plaintiff may continue their examination of the witness.

MR. FISHER: Thank you, your honor. Mrs. Donnelly, in your opinion as a clerk in the trademark office, which logo was registered first: Sun or Columbia?

MRS. DONNELLY: Sun's was registered in 1982, and changed to look more like Columbia's after that. Columbia has used their logo since before 1982.

JUDGE HARRIS: Mr. Wright, what is your objection?

MR. WRIGHT: Sorry, does the sign not show up?

MR. WRIGHT: The sign. The big objection sign? The one that shows up when you yell "OBJECTION!"

MRS. DONNELLY: Yes, Columbia's trademark on this logo is older.

JUDGE HARRIS: The defense may cross-examine the witness.

MR. WRIGHT: Mrs. Donnelly, when did you start working in the trademark office?

MR. WRIGHT: Really? There's no sign for when I yell "Hold it" either? What about TAKE THAT!?

JUDGE HARRIS: What did I just say?

MR. WRIGHT: Sorry. Hold it, Mrs. Donnelly. If you began in 2006, how do you know Columbia's trademarks existed before then?

MRS. DONNELLY: I work in the trademark office. I looked at old records. That's all we do… We keep records. It's well documented that Sun's trademark comes after Columbia's.

MRS. DONNELLY: What––what are you doing?

MR. FISHER: Objection, relevance. Mr. Wright is holding up a rock in the shape of the number 9 in Mrs. Donnelly's face.

MR. WRIGHT: It's a magatama, your honor!

MR. WRIGHT: But I need it to see if she has any Psyche-Locks on her?

JUDGE HARRIS: Psychic anything is not permitted in the ninth circuit court of appeals, counselor.

MR. WRIGHT: Hmmm. Well played, Fisher. Well played. You will be a worthy adversary. Your honor, I request a moment to consult with my assistant, Maya Fey.

JUDGE HARRIS: On what grounds?

MR. WRIGHT: This case is hard and I need to use her to channel the spirit of my dead boss for advice.