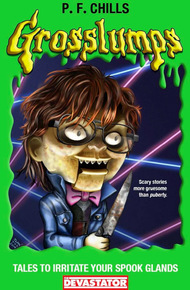 P. F. Chills' horror books for children are sold in Dollar World bargain bins across the country! He's written over 900 books. If you stacked them all on top of one another, you would have the premise for Grosslumps #598: The Ghost Librarian's Teetering Stack.

Here lie nine spooktacular, hauntifying, and ghouleriffic tales by horror mega-maestro P. F. Chills! A high school where human sacrifices are the illest. A magic button that delivers killer pizza. An aging rock band who turns fans into demons. A kid who discovers his parents' divorce lawyers are aliens. These stories and more will give you a nasty, highly contagious case of the grosslumps.

Grab some Ecto-Coolers, create a pillow fort, grab your flashlight and read our Goosebumps parody. You’ll either be transported back to your childhood, or your significant other will have you institutionalized! – The Devastator

"Randy looked at his lunch. It made him queasy. The wings were still twitching.

Slowly, Randy brought the bat's butt closer to his mouth. He inserted the butt past his lips. His tongue slurped up a couple guano flecks.

Randy spit out the dried guano in disgust.

"I can't do it," Randy told the demons at the cafeteria lunch table. "I can't eat bat butts!"

Two days ago, lunch period was much less gross.

Randy had blue eyes and ash brown hair. He had a shaggy bowl cut. This was the result of escaping halfway through Mrs. Wyler's monthly haircuts.

Randy put down his Bahama Brew drink pouch to wave at Butch.

"Dude dude dude," Butch said between asthma snorts. "Check out this flyer I found in the trash!"

"Butch Wiseman was the only 14-year-old 6th grader in the history of the school district. Butch's ash brown hair had permanent flop sweat around the edges. His brown eyes sparkled with mischief. Like all kids named Butch, he was super fat.

Butch pulled out a rumpled flyer from his backpack. He smoothed it out with his big clammy hands. It was a flyer for a band called Spykz.

"Whoa, cool. There's bats on it!" Randy said. He was faking not being terrified of bats. Though, he did respect them for their total badness.

Randy noticed the band's entire biography was on the back of the flyer. "Oh look, there's a bunch of facts about Spykz on the flyer, too!"

"Yeah, they're super into promotion. They love reminding you all about their back story. So cool!" Butch was still snorting, from excitement.

Randy and Butch read aloud to each other. With each fact, they got more and more excited:

Spykz were mega demons from the dimension WYX.

"They thrived on your parents' disapproval.

They were available for arena football concerts, corporate speaking events, and would be at Licensing Expo '95 this June!

"I wonder if they ever show up on TV sometimes?"

"Oh yeah, man, they're on everything radical: Celebrity Wheel of Fortune, Diana Ross' 50th Birthday Special, Syndicated Late Night Talk Show with Steve Stevens. The list goes on, man. But the only way to truly experience them is... live!"

"How am I gonna get my parents to let me go?"

"Whatever man. Just sneak in with me. Tell them you're taking your dumb kid sister to a sleepover or something."

Randy thought about this. Lie to his parents? No, that would be unthinkable.

He would just be honest with them. His parents would see how much it meant to him and would let him go, as long as he promised to be safe.

"Hey, so, mom. I'm gonna take Kira to that sleepover this weekend," Randy blurted out nervously at the dinner table. "You know, be a chaperone. Kelsey's mom said it was cool. I'll like bring popcorn and stuff. What? It was all my idea!"