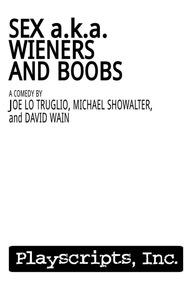 Joe Lo Truglio is a founding member of the sketch comedy troupe The State, which produced shows on MTV and CBS. His other TV credits include TV Funhouse, Upright Citizens Brigade, Law & Order, and Third Watch. He has co-written and performed theater shows, including SEX a.k.a. Wieners and Boobs in both New York and Los Angeles, and "Stella," an evening of big-room comedy at Fez in NYC. He also appeared in the films Wet Hot American Summer and The Station Agent.

Michael Showalter has written for numerous television and film projects, including The State (MTV), Random Play (VH1), the film Wet Hot American Summer, and the upcoming film They Came Together (both with co-writer David Wain). He also performs with Stella, a live cabaret act with collaborators David Wain and Michael Ian Black. Mr. Showalter is currently screenwriting full-time, has two scripts in development, and will direct his first solo scripted feature, tentatively titled The Baxter, in the fall of 2003.

David Wain is a filmmaker and comedian. He first gained attention as a member of The State, a comedy troupe that enjoyed an acclaimed series on MTV. He is the director of Wet Hot American Summer, a feature film starring Janeane Garofalo, Paul Rudd, David Hyde Pierce, and Molly Shannon. More recently he created and starred in STELLA, a series on Comedy Central. He continues to divide his time between feature film, television, and live theater projects as a writer, director, and performer. A native of Shaker Heights, Ohio, he currently lives in Manhattan.

Jack Greenberg is the new sheriff of Teaneck, New Jersey. Unfortunately, the corrupt town is run by Tad Theaterman, a crime boss armed with henchmen and a legion of hookers and gigolos. The Mayor and townsfolk fear Tad, but love the money the sinful brothels bring in! When Jack meets Hillary, a recent divorcee, it's love at first sight, but there's a showdown that's closin' in on our hero! Will Jack save Teaneck, get the girl, and defeat Tad? Or will the wieners and boobs prevail?!

A rare gem from the minds behind The State, Wet Hot American Summer and They Came Together. Welcome to Teaneck, New Jersey, comedy nerds! – The Devastator

(Empty stage. Three chairs and a table in the background. House lights are up. Music comes down slightly. DONIELLO walks on stage.)

DONIELLO. Hi everyone, I'm Doniello, the Artistic Director here at the _______ theater. Thanks for braving this terrible storm to make it to our show tonight.

A word about how this play came to be. It all started one week ago, when the show originally scheduled for this run here at ______ was cancelled last minute. At that point, I, Doniello, immediately called Joe Lo Truglio, Michael Showalter and David Wain, some guys I had met in New York, who I knew had nothing much to do. Four days ago the trio were already hard at work writing the script, and we are proud to present to you the final result of their nearly week- long journey, "Sex, also known as Wieners and Boobs." Which was originally titled "The Life and Good Times of Jesus Christ's Silly Penis." A few other little things we'd like to call to your attention. First of all, as you probably have heard, tonight's performance will include a scene from David Mamet's (He pronounces it "mam-AY's") classic play, Glengarry Glen Ross. Secondly, there will be a strobe light used in tonight's show. So those of you who suffer from trench mouth or dropsy will have to turn 360 degrees during those se- quences. Also, at a certain point there will be some audience par- ticipation, so if any of you out there in the audience all of a sudden feel some ener-gi thrown your way—someone's pointing at you asking for something—just take that ener-gi, make it your own, and give it right back, whatever they're asking for. All in the spirit of fun! In fact, I'm going to get the ball rolling right now! I need any- one in the audience to yell out the name of a famous celebrity, liv- ing or dead, and this celebrity will be incorporated into our story.

(DONIELLO gets the name from an audience member.)