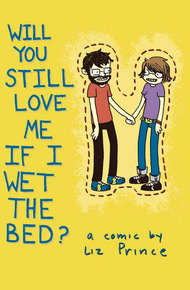 Liz Prince has been drawing comics ever since she was in 3rd grade, and her work has been published since 1994 when she began regularly contributing to the Santa Fe based zine Are We There Yet? From there, the offers didn't stop coming. Her comics have been featured in several zines/comic anthologies, 5 gallery shows, and she has produced 2 mini-comics. Influenced by autobiographical greats like Evan Dorkin, Ariel Schrag, James Kochalka, and Jeffrey Brown, her comics mix her real-life foibles with charming cartooning and comic timing. Her fans have described her work as being "cute," making them feel "warm & fuzzy," or simply being "too much information." Liz's first full-length book Will You Still Love Me If I Wet the Bed?, exploring the banal and fascinating intimacies of her first true love, won the Ignatz Award, and was followed by Delayed Replays in 2008.

Will You Still Love Me If I Wet The Bed? by Liz Prince

What started out as an exercise in keeping a personal comics journal, quickly evolved into Liz Prince's first solo graphic novel. Described as a mix between Jeffrey Brown and James Kochalka, Liz's comics are comprised of short vignettes that capture all the cute, gross, and endearing aspects of relationships. It's the perfect book for all those fans of autobiographical comics who want to see a happy ending.

Liz Prince’s comics are like Hawaiian Punch. They will punch you in the face with refreshing sweetness. – The Devastator