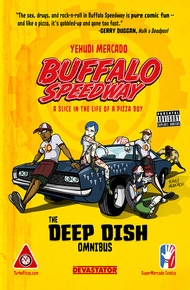 Former pizza delivery driver from Texas now works as an art director for Disney Consumer Products. His first graphic novel, Buffalo Speedway, is based on his screenplay that earned him the Final Draft Big Break award. His next book, Pantalones, TX (published by Archaia), is an all-ages comedy western about tiny outlaws in a tiny Texas town. In 2014 Yehudi was the writer and art director of the Guardians of the Galaxy: The Universal Weapon mobile game (Marvel/ Disney Interactive). He is a regular contributor to the Uncle Grandpa and Amazing World of Gumball comics (Boom/ Cartoon Network). Upcoming comic projects include Rocket Salvage (Boom/ Archaia) a six issue mini-series about mechanics on a space port and Sci-Fu (Oni Press) a hip-hop, sci-fi, kung-fu all-ages graphic novel.

The average pizza boy drives 7 hours a day. In those 7 hours they drive an average of 95 miles. A full-time driver will drive enough to circumnavigate the globe in one year. And every day a pizza delivery driver is robbed at gun point. This is a dangerous gig. So why do so many pornographic films star the hapless pizza boy? Because being a pizza boy is that awesome. Welcome to the world of Buffalo Speedway.

It's July 17th 1994 in Houston, Texas. Figgs, our hero, is on the precipice of a major anniversary; eight years of slinging pies. In the pizza biz you're either a lifer or a temp, once you reach the magic number of eight years you become a lifer and you will be delivering pizzas for the rest of your life, your short life. Figgs and his dead-beat best friend, Super Cheese, work for Turbo Pizza. Super Cheese is content to be a pizza boy for life (mainly because he enjoys having sex with desperate housewives), but Figgs always wanted to be a police officer. The only problem is that cops and pizza boys don't mix.

The day is slated to be busy, the World Cup is being hosted by America for the first time and the Rockets will battle the Knicks in the NBA finals tonight. When a breaking news bulletin calling for the whereabouts of OJ Simpson is broadcast, all the shit hits the fan. Suddenly the world is indoors watching TV and ordering pizza. This day is either the broken back camel straw for Figgs or it will forever forge him, via trial by fire, to become the greatest pizza boy ever.

There should be more hilarious, raucous action/adventure comics like Buffalo Speedway. It gives a whole new meaning to “slice of life” comedy. – The Devastator