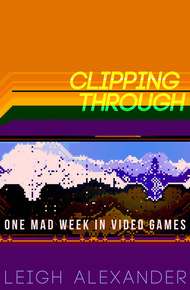 Leigh Alexander is a journalist, critic and speaker on the art, business and culture of video games and interactive entertainment. She is editor at large at leading industry site Gamasutra, hosts the monthly Understanding Games column at VICE, and her work is widely-published in the specialist press at outlets like Edge, Kotaku and Polygon. Her video series, Lo-Fi Let's Play, looks at obscure and vintage adventure game software for Rock Paper Shotgun, and her work has also appeared in The Atlantic, Slate, The New Statesman, The Columbia Journalism Review, The Guardian and the New Inquiry. She frequently speaks at events and schools on feminism in tech and games for social good.

She is also co-founder of Agency, a game design consultancy, and wrote two ebooks, Breathing Machine and Clipping Through, both about life with and relationships to tech.

Clipping Through - One Mad Week in Video Games by Leigh Alexander

Get up close with suits, madmen, dear friends, industry heroes (and gnawing personal terror), in some of Leigh Alexander's boldest and most intimate writing yet. The veteran game journalist takes you inside the curious experience of life and work in video games — through the lens of one week spent at the incredible Game Developers Conference.

This intense first-person tome looks at a week at Game Developers Conference - which I help to run - from Leigh's unique perspective. There's still very little personal writing about video games and game culture out there, and this is a striking example of just that. – Simon Carless

When I left London to return to New York just a few weeks earlier, at passport control they asked me what I was doing in the country for three months. Doing journalism, I'll say, for American games magazines, which isn't untrue. I participated in the jury process for the British Academy of Film and Television's games category, I'll say. I went to Paris with a British friend. You don't tell them 'boyfriend' because they'll think you're some kind of swooping bog witch, hunting for a marriage visa.

I sound pretty legit, I think, when I talk to border guards about my work, but then it always seems to come apart a little bit. "You work in video games?" Asks the agent at Newark Airport. "Do you actually have to play them?"

I'm a game journalist for a living. I write about video games. Sometimes I try to make this an easier or more elegant thing to talk about by saying I write about "interactive entertainment and social media." In a pinch, just "tech."

Talking to the border guard, I hear my own voice coming back to me, its childlike attempt to convey enthusiasm without sounding completely batshit. It does not sound like I'm talking about a real job, I admit. They always ask me what my favorite game is — they're watching for authenticity in my response, reading me to see if I really do what I say I do.

In that respect, the border control officer baffled by games is not actually all that different from that of a lot of people in the industry, or of "gamers" who read my work. To some extent the "authenticity test" is, for some reason, part of the participation ritual for anyone in this space, but women get it worse.

In 2008 or 2009 I was an employee of Kotaku. I think the most trafficked article I did as a staff writer there was an interview with a Playboy Playmate, who was pitched to me as "Cyber Girl of the Year," a sort of True Gamer Girl Fantasy who was also a nude model. I'm pretty sure that I endeavored, if immaturely, to treat her with some dignity and without the alternating slavering and skepticism one would expect her to court.

But in the interview, when she told me she was obsessed with Final Fantasy XII, I asked her, as cool-detective as I could muster, if she knew how to get the Zodiac Spear. She did, and described it to me, this infuriatingly intricate sequence of chests you could just mess up without ever realizing you'd messed it up. And I thought, "hmm, approved." Ugh.

The stamp came down and I was allowed to re-enter the United States. I stayed in New York for a few weeks and then I went to California. For work. For GDC.

Every time I make my flight to something like this, I feel like I've successfully tricked someone: maybe the Authenticity Police. More likely, the squad that goes around checking to see if people masquerading as adults are really adults. Yesss, fooled you, I think, buckled into my economy seat in my tights and bright sneakers. I try on thoughts like I'm on a business trip. I suspect this shit will never go away.