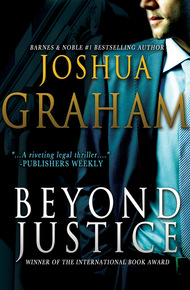 Beyond Justice by Joshua Graham

THE DESCENT INTO HELL IS NOT ALWAYS VERTICAL…

Sam Hudson, a reputable San Diego attorney, learns this when the authorities wrongfully convict him of the brutal rape and murder of his wife and daughter, and sends him to death row. There he awaits execution by lethal injection.

If he survives that long.

In prison, Sam fights for his life while his attorney works frantically on his appeal. It is then that he embraces the faith of his departed wife and begins to manifest supernatural abilities. Abilities which help him save lives– his own, those of his unlikely allies–and uncover the true killer's identity, unlocking the door to his exoneration.

Now a free man, Sam's newfound faith confronts him with the most insurmountable challenge yet. A challenge beyond vengeance, beyond rage, beyond anything Sam believes himself capable of: to forgive the very man who murdered his family, according to his faith. But this endeavor reveals darker secrets than either Sam or the killer could ever have imagined. Secrets that hurtle them into a fateful collision course.

BEYOND JUSTICE, a tale of loss, redemption, and the power of faith.

There are a number of authors that I'm always amazed aren't blockbuster bestseller types like Lee Child or James Patterson. Despite being a New York Times and USA Today bestselling author, Joshua Graham is one of those writers. In a perfect world, he would be one of the biggest names in fiction. Beyond Justice is a sweeping story of injustice and redemption that firmly establishes Graham's place as a force in the thriller genre. – Allan Leverone

The descent into Hell is not always vertical.

The question most people ask when they first meet me is: How does an attorney from a reputable law firm in La Jolla end up on death row? When they hear my story, it becomes clear that the greater question is not how, but why.

I have found it difficult at times to forgive myself for what happened. But a significant part of the answer involves forgiveness, something I never truly understood until I could see in hindsight.

Orpheus went through hell and back to rescue his wife Euridice from death in the underworld. Through his music, he moved the hearts of Hades and Persephone and they agreed to allow Euridice to return with him to Earth on one condition: He must walk before her and not look back until they reached the upper world. On seeing the Sun, Orpheus turned to share his delight with Euridice, and she disappeared. He had broken his promise and she was gone forever. This failure and guilt was a hell far worse than the original.

My own personal hell began one night almost four years ago. Like images carved into flesh, the memories of that night would forever be etched into my mind. The work day had been tense enough—my position at the firm was in jeopardy because of the inexplicable appearance of lewd internet images in my folder on the main file server.

Later that night, as I scrambled to get out the door on time for a critical meeting with a high profile client, my son Aaron began throwing a screaming fit. Hell hath no fury like a boy who has lost his Thomas Train toy. In my own frenzied state, I lost my temper with him. Amazing how much guilt a four-year-old can pile on you with puppy-dog eyes while clinging to his mother's legs. His sister Bethie, in all her seventh grade sagacity, proclaimed that I had issues, then marched up to her room, slammed the door and took out her frustration with me by tearing though a Paganini Caprice on her violin. All this apocalypse just minutes before leaving for my meeting, which was to be held over a posh dinner at George's At The Cove, which I would consequently have no stomach for.

I couldn't wait to get home. The clock's amber LED read 11:28 when I pulled my Lexus into the cul-de-sac. Pale beams from a pregnant moon cut through the palm trees that lined our street. The October breeze rushed into the open window and through my hair, a cool comfort after a miserable evening.

If I was lucky, Jenn would be up and at the computer, working on her latest novel. She'd shooed me out the door lest I ran late for the meeting, before I could make any more of a domestic mess for her to clean up.

The garage door came down. I walked over to the security system control box and found it unarmed. On more than one occasion, I had asked Jenn to arm it whenever I was out. She agreed, but complained that the instructions were too complicated. It came with a pretty lame manual, I had to admit.

The system beeped as I entered the house, greeted by the sweet scent of Lilac—her favorite candles for those special occasions. So much more than I deserved, but that was my Jenn. Never judging, never condemning, she understood how much stress I'd been under and always prescribed the best remedy for such situations.

From the foot of the stairs I saw dimmed light leaking out of the bedroom. It wasn't even date night, but I had a pretty good idea what she was thinking. So before going up, I stopped by the kitchen, filled a pair of glasses with Merlot and set out a little box of chocolates on a breakfast tray—my secret weapon.

As I climbed the stairs I smiled. The closer I got, the more I could smell the fragrant candles. From the crack in the door classical music flowed out: Pie Jesu from Faure's Requiem. Must've been writing a love scene. She always used my classical CDs to set her in the right mood.

A beam of amber light reached through the crack in the doorway into the hallway. The alarm system beeped. She must have shut a window. It had just started to rain and Jenn hated when the curtains got wet.

Jenn didn't know a word of Latin. She just liked the pretty tunes.

I nudged the door open with my foot.

"Honey?" Caught a glimpse of a silky leg on the bed. Oh, yes. I pushed the door open.

Shock ignited every nerve ending in my body like napalm. The tray fell from my hands. Crashed to the ground. Glasses shattered and the red wine bled darkly onto the carpet.

I ran to her, turned her over.

She gasped, trying to speak. Coughed. Red spittle dripped from the corner of her mouth. "The kids..."

I took her into my arms. But her eyes begged me to go check on them.

"You hang on, honey. With all you've got, hang on!" I reached for my cell phone but it fell out of my belt clip and bounced under the bed.

On my knees now, I groped wildly until I found the cell phone. Dialed 9-1-1. Barely remembered what I said, but they were sending someone right away.

Her eyes rolled back.

"I'm going. Hang on, baby. Please! You gotta hang on!" I started for the door. Felt her hand squeeze mine twice: Love-you.

Tears streamed down my face. As I began to pull away, she gripped my hand urgently. For that split second, I knew. This was the end. I stumbled back to her. Gathered her ragdoll body into my arms.

"Whatever it takes," she said. Again, she squeezed my hand twice. "Mercy, not...sacrifice." One last gasp. She sighed and then fell limp in my arms, her eyes still open.

Holding her tight to my chest, I let out an anguished cry.

All time stopped. Who would do this? Why? Her blood stained my shirt. Her dying words resonated in my mind. Then I remembered. The kids. I bolted up and ran straight to Bethie's room.

Bethie's door was ajar. If my horror hadn't been complete, it was now. I found her exactly like Jenn—face down, blood and gashes covering her body.

Though I tried to cry out, nothing escaped the vice-grip on my throat. When I turned her over, I felt her arm. Still warm, but only slightly. Her eyes were shut, her face wet with blood.

"Bethie! Oh, sweetie, no!" I whispered, as I wrapped the blanket around her.

I kissed her head. Held her hand. Rocked her back and forth. "Come on, baby girl. Help's on its way, you hold on," I said, voice and hands trembling. She lay there unconscious but breathing.

Gently, I lay Bethie back down then got up and flew across the hall. To Aaron's door. His night light was still on and I saw his outline in the bed.

I flipped the switch.

I dashed over to the lamp on his nightstand, nearly slipping on one of his Thomas Train toys on the carpet. Broken glass crackled under my shoes.

I switched on the lamp on his nightstand. When I looked down to his bed, my legs nearly gave out. Aaron was still under his covers, but blood drenched his pillow. His aluminum baseball bat lay on the floor, dented and bloodied.

Dropping to my knees, I called his name. Over and over, I called, but he didn't stir. This can't be happening. It's got to be a nightmare. I put my face down into Aaron's blue Thomas Train blanket and gently rested my ear on his chest.

I felt movement under the blanket. Breathing. But slowly—irregular and shallow.

Don't move his body. Dammit, where are the paramedics?

I heard something from Bethie's room and dashed out the door. Stopping in the middle of the hallway, I clutched the handrail over the stairs. Thought I heard Aaron crying now. Or maybe it was the wind.

My eyes darted from one side of the hallway to the other. Which room?

Something out in front of the house caught my attention. The police, the paramedics! Propelled by adrenaline, I crashed through the front door and ran out into the middle of my lawn which was slick with rain. I slipped and fell on my side.

Nobody. Where were they!

Like a madman, I began screaming at the top of my lungs. My words echoed emptily into the night.

Lights flickered on in the surrounding houses.

No one came out.

I don't know if I was intelligible at this point. I was just screaming, collapsed onto the ground, on my hands and knees getting drenched in the oily rain.

Just as the crimson beacons of an ambulance flashed around the corner, I buried my face into the grass. All sound, light, and consciousness imploded into my mind as if it were a black hole.