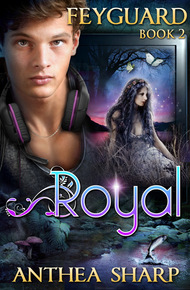 Royal is a standalone book that does not require reading Feyguard - Book 1 in order to enjoy!

Rich-boy gamer Royal Lassiter lives on easy mode—until everything falls apart. Dark faeries are plotting to invade the mortal world, his controlling mom has turned home into enemy territory, and he can't deny his irresistible attraction to newcomer Brea, despite the danger lurking in her mysterious eyes.

Forced to undertake a perilous mission for the Dark Queen of Faerie, Brea Cairgead finds living among humans and hiding her true nature as one of the fey folk a fearsome challenge—especially when her emotions prove all too vulnerable to a certain human boy. Torn between impossible loyalties, she must serve her queen... though it may cost her heart.

Can love between mortal and fey ever have a happy ending?

When I first started writing about high-tech computer gaming intersecting with the Realm of Faerie, I never dreamed I'd find so many readers willing to go along with my crazy vision. The Feyguard books continue on from the original Feyland trilogy—and Royal follows the coming-of-age journey of the title character as he learns (with a few false starts) to leave his spoiled rich-boy history behind and claim the title of a true hero. – Anthea Sharp

It had taken her a fortnight and three days more to find her way about the human world. Now the girl sat cross-legged, enclosed by the ruined walls of the shelter she'd claimed. The chill of the stained concrete floor did not bother her. One section of the roof jutted overhead, intact enough to keep out the worst of the wind while still revealing a wide swath of sky. Morning clouds and their early chill had shredded away. Weak sunshine straggled in through the gaping holes in the plaster walls. The light was strange, filtered to an oily yellow by the layer of smog hanging over the city.

The few trees remaining in the derelict neighborhood had rotted from within. Some, like the withered sentinel standing outside her wall, still bore lifeless brown leaves that rattled in the breeze. Thin grass grew in the cracks of the cement, the only sign that spring lay across the land.

The regular residents of Crestview had abandoned this part of the city. Now it was inhabited by roaming packs of mortal boys who reminded her of hungry, feral creatures. Husk-empty women shuffled through the crumbling streets. A building two blocks away housed a clan of yellow-eyed smoke drifters, who dove deep into maniacal dreams even when awake.

The air smelled of decay and hopelessness, of mildew and rot. They called it the Exe, and it was the perfect place to hide.

Under the partial overhang of the roof, she'd made a sleeping pallet mounded with soft blankets. A small wooden chest, bound round with enchantments, contained the precious medallion she had brought from the realm. Strewn about her was a collection of devices essential to navigating her new world. Tablets and messagers and a vid display, effortlessly liberated from the cluttered stores where such things were sold. Scavenged packing boxes held clothing and cosmetics and the sundry items a human girl needed.

But she was not human, and this was not a true home.

Shivers chased over her at the thought that she might never return to the realm—that she would fail and be banished forever to the Shadowlands. She took two fistfuls of her long black hair, and tugged anxiously. Yet, despite her small powers, she must accomplish her required task.

The first step was to become as human as possible. She had chosen a name, a mortal one in two parts, as was their custom. Brea Cairgead. She rolled the syllables about her tongue.

"My name is Brea," she said aloud. "Brea Cairgead. Pleased to meet you. Yes, I am from Eire. Ireland, as you call it. Would you like something to drink?"

She would not be entertaining guests, but the words were a standard part of the vids she'd memorized in her effort to camouflage herself. Early on, she'd realized she must claim to come from a foreign land. She smiled briefly. No one would guess how very far away she was from her homeland.

It was the day of the moon. Monday. A fitting day to begin, and indeed, she could delay no longer. Too long had passed since her arrival, and the ice of the queen's impatience chilled the air, discernible even in the mortal world. Brea snatched up her newest tablet, then conjured a plastic card with her human name and semblance—identification, they called it—and tucked it in the pocket of her sweater.

She must be careful to seem human from this moment on. No more using her magic to transport herself from place to place. The clothing she wore must be made of worldly substance, not woven of starlight and shadows. Although she could drink liquids in this place—indeed, if she did not, she would shrivel from thirst—she could not eat of the food. But she would pretend to do so.

Today, she was a mortal girl.

Roy Lassiter tapped his fingers on the shiny edge of his tablet and let the droning voice of his history teacher, Ms. Lewis, wash over him. He lounged back in his chair, but couldn't get comfortable no matter how far he stretched his legs. Usually he paid more attention in class—World History was one of the two subjects he actually enjoyed, the other being Art—but today, everything felt wrong.

Although it was May, the air held a chilly snap reminiscent of late winter. The scent of decay crept along the halls of Crestview High, mingling with the fake lemon smell of industrial disinfectant. The students' voices carried strangely, as if underwater.

Roy skimmed his gaze over his classmates. Everyone looked the same as ever: alternately bored, attentive, doodling with one finger, taking diligent notes, or staring out the windows. Nobody else seemed to feel as though the normalcy of the day had turned on its edge, a sharp blade of strangeness cutting through the world.

Once, he would have shrugged it off, ignored the prickle at the back of his neck. But he'd seen freaky things in the last year. Battling nightmare monsters and traveling deep into a fantastical realm tended to give a person a different perspective, and he'd started to trust his instincts.

The shrill signal of the lunch bell at the end of class made him jump. He tucked his tablet away, then joined the throng in the hall, following the hot, damp smell of overcooked gravy. The cafeteria rang with voices as he veered toward the back table where his friends sat.