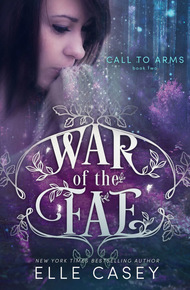 Elle Casey is a prolific, New York Times and USA Today Bestselling American writer who lives in southern France with her husband, three kids, and several furry friends. She writes in several genres and publishes an average of one full-length novel per month.

War of the Fae Book 2: Call to Arms by Elle Casey

Follow Jayne Sparks, the (still) potty-mouthed seventeen-year-old and newly changed elemental fae and her friends - an incubus, a daemon, a green elf, a water sprite and a pixie - as they struggle to find their places in the Light Fae community of the Green Forest and prepare for the upcoming battle against the Dark Fae.

**No sex or drugs. Yes, contains some violence and foul language - some might say excessive foul language. Not meant for middle-grade readers (less than 15 years of age).**

I've known NYT bestseller Elle Casey for a few years now, and our books have had the pleasure of sharing fae-themed bundles, so including her in this StoryBundle was a no-brainer. Her War of the Fae series features a smart-mouthed, sassy teen who discovers that the world of the fae is all too real. In addition to her YA fae books, Elle is hard at work on multiple series in multiple genres, and is basically an unstoppable force of nature. – Anthea Sharp

MY WORLD FELT LIKE IT was imploding. Or at least, like the rug had been pulled out from under me and I'd done a cosmically awful face plant. In the space of an hour, I'd found out that my best friend Tony and I are members of a species of creatures called 'fae', and that we each have the opportunity of a lifetime to become someone or something extraordinary. We can accept the change that will awaken the fae blood that is in our veins - to go from human to fae - to become changelings.

But Tony is choosing instead to go back home to Florida, to deny the change and stay fully human. He's not going to share in this new adventure with me, abandoning me when I need him most. Even worse than that, he's willing to have his memory erased so that he won't remember the hell we've been through over the last few days - completing the test that proved to the fae that we share their blood. He won't even know about the fae anymore. The one thing that could ultimately become the most important thing about me, the most special thing I could ever claim for myself, Tony will never and can't ever know about it. How had this happened?

"What do you mean, you're not going to do it?" I asked, desperation in my voice.

Our friends Spike, Chase, Finn, and Becky – were as stunned as I was.

"I know this is a shock. I know you think I should do it, but I just can't. It's too much. You saw what happened out there. You saw what all those fae did. They killed people - they killed each other. You know me, Jayne. I'm a nonviolent person."

"Screw that, Tony! You pulled a gun on Brad Powers. You're a badass!"

Tony and I confronting Brad the bully outside our high school is kind of what had started us on this whole thing. First, we ran away together to Miami where we met Jared and the others. Jared turned out to be a Light Fae daemon recruiter posing as a teenager, but when we answered an ad offering five hundred bucks in exchange for successfully completing a test, we had no way of knowing who or what he really was - or that he was leading us into anything. The test, it turned out, was held in some unidentified enchanted forest somewhere, where we were taken after being drugged by Ivar, the Light Fae's muscle-head lackey. For two days and nights we battled various fae creatures until we came out in the end alive - proof that we likely had fae blood running through our veins. Our reward was that we could - if we wanted and if their test correctly identified us as having fae blood - become fully fae. But now, Tony was turning them down.

Tony smiled sadly. "That was a million years ago, before I really knew what using a weapon was all about. I can't take that responsibility, possibly having to end someone's life."

Becky looked at him. "But maybe you'll be a sprite, like me. We're a nonviolent race."

"Yeah, but you heard Niles. There's a war coming, and all of you are going to be asked to defend your people - the fae." Tony got up from his seat and came over to me, reaching down and pulling me to my feet. "Jayne, listen. You know how important you are to me. You're my best friend in the whole world, and that's not going to change. I don't want to be a part of this; it's not for me. But it is for you. This is what you were born to do. You kick butt. You stand up for what's right. You're not just special ... you're extra special. Become a changeling and forget about me for now. When you're all done figuring this stuff out, come back home."

"But, Tony, what if I can't? Besides, you're not going to remember any of this shit!" I was so stressed out I didn't know whether to cry or scream, hug him or hit him.

Tony had the uncanny ability to sense my emotions and the direction of my thoughts, even though he was still only human. "Choose love and understanding, Jayne. And please don't hit me."

I grabbed him to me and hugged the crap out of him. "I don't think I can do this without you."

He patted me on the back. "Yes, you can, you'll be fine. You have Spike and Chase and Finn to look out for you."

"And me!" said Becky brightly.

Everyone got up from the table and came around to stand with us. Tears were streaming down my face. It seemed like Tony had already left, even though he was standing right in front of me.

Finn bent down to speak in Becky's ear. "Sweetie, I think you should go tell 'em we're ready. No sense draggin' this thing out any more'n it needs to."

Becky disappeared to go tell our hosts that we had accepted their offer to become changelings - disappeared literally. Apparently, water sprites could teleport through the air because there's so much moisture in it. This was just one bit of fae trivia we'd learned today.

Moments later, Dardennes and Céline – the silver elves who were our hosts - entered the room.

"You have made your decisions," declared Dardennes.

"Who has decided to become a changeling?"

Everyone but Tony raised their hands. I saw him standing there with his arms at his sides, and it made me cry again, silently.

"And those who have decided to have their memories erased?"

I felt like I was going to vomit. I pleaded with him in my mind, but he just shook his head, silently responding 'no'. I had to look away or I was going to start sobbing out loud like a baby.

"Young man, we will start with you. Please come this way."

Tony turned to me. "I guess this is goodbye for now."

I couldn't trust myself to speak. The tears were streaming down my face, dripping off my chin and drenching my shirt. I didn't want to make him feel guilty for his choice - I understood it - so I didn't beg. Tony is a lover, not a fighter. The one moment when he pulled that gun on Brad Powers was an aberration, not who Tony really is. I couldn't ask him to go against his nature; it wouldn't be fair or right, but sometimes I really hated doing the right thing.

I grabbed him in a tearful bear hug, wishing I could squeeze some sense into him. But then I let him go. Chase put his arm around me, and I buried my face in his chest while he awkwardly patted by back. He's the strong silent type, not all that comfortable with girly emotions.

Tony started to walk out, and I pushed away from Chase in a last ditch effort to prolong the goodbye. "Can I come with him?"

Céline came over to me and said softly, "No, I'm afraid you cannot. Only the subject and the eraser will be together."

I sniffed. "Okay, but you make sure he doesn't erase too much."

Tony glanced back on his way out. "Bye, Jayne. See you soon." The door closed behind him and Céline.

I didn't trust them to do what they said they'd do. "You can try to erase his memory of me, but I'll un-erase it!"

Dardennes just looked at me, saying nothing.

"I'll friggin do it," I mumbled under my breath.

Spike leaned over and whispered in my ear, "And I know you could do it, too."

I smiled and whispered back, "You bet your ass I could."

He laughed spontaneously, smiling in his trademark sexy-Spike way, but then immediately put on a straight face for Dardennes and his group.