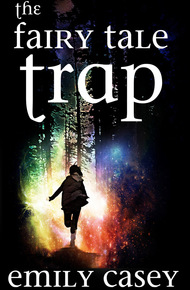 Emily is a snark-loving writer who chases her crazy kids around the house before collapsing in front of her computer.

She writes everything from fairy tales to zombies and doesn't mind when her imagination goes off the beaten path.

Other tid-bits: She's a dog person (Emily has a German Shepherd named Guybrush), she likes to run, and she majored in Psychology (which explains why she's a little nuts) with a minor in English (which explains the whole writing thing).

Ivy has always been afraid of mirrors, but she never knew why. Then one of them sucks her into the fairy tale Beauty and the Beast.

All she wants is to find her way home. But when she tries to escape, Ivy breaks the wrong spell. Now Beast is not so gentle-on-the-inside, Beauty is falling for the wrong prince, and Ivy is no closer to figuring out how to get through the enchanted forest that traps her.

With magic mirrors, dancing fairies, a sadistic pixie, and other random fairy tale twists, Ivy doesn't know what's safe or who to trust. Can she escape the fairy tale trap?

Emily Casey brings the fairy tale twists in a classic sucked-through-the-mirror story of a modern teen dealing with a magical world. Loosely based on Beauty and the Beast, The Fairy Tale Trap complements our line-up of faery themed books, and adds a fresh, original voice to the mix. – Anthea Sharp

I stand as still and quiet as I possibly can, but my breath rushes into my lungs and then demands to be let out. My body is done. I can't run any more. My eyes water as I pull out my knife with a shaky hand and wait for Beast's attack.

A high warbling sound comes from the trees. Was that a horse? Hooves rip across mulched leaves. Before I can turn my head, the sound of metal scraping against metal makes every one of my muscles clench tighter.

Beast's reaction is faster than mine. His huge, hulking form whips around, protecting the length of his body behind teeth and claws. His tail slashes back and aims at the rider.

A man in brown and gold clothing raises a sword above his head, slicing through a few twigs above him. His hair shines in the moonlight. He smiles at me with a lifted eyebrow. "It appears I arrived just in time."

The man laughs like he just told a really great joke and points his blade at Beast. "I challenge you, wild beast, for the lovely maiden…" He wrinkles his brow at me. "and I suppose this servant girl as well." He flashes his teeth and lifts his chin with haughty confidence. "To the death."

I'm not sure if Beast understands English or not, but he seems to get the message. He gives the rider that all-too-familiar rumble from the back of his throat. I'm just glad that, for once, it's not aimed at me.

The longer I look at Beast, the more I see the furry, lovable guy that led me back to his castle, the animal that I knew was really a man. The man I destroyed.

The rider throws his shoulders back and urges his horse forward. His sword catches a ray of moonlight. I can't let him fight Beast. Besides, he thinks I'm a servant girl. That's not gonna fly.

I step between the rider and Beast. Neither of them seems to notice, so I wave my arms over my head. "Hey, what do you think you're doing? This is a private party."

Beast growls behind me. I don't think he's too fond of me right now and, to be honest, I'm starting to regret standing in front of him. The rider stares at me, then does that annoying, perky laugh again. "Stand aside, plain servant girl. I'll protect you."

He swings his sword over his head again, before aiming the sharp end at Beast, and unfortunately at me too, because I'm an idiot who stands between angry wild animals and men with swords. I'm about to tell him what this plain servant girl will do to him if he doesn't get his pointy stick out of my face, but Beast apparently has seen enough swordplay.

The next thing I see is Beast's underbelly soaring over me. He lands between me and the idiot rider and snaps at the horse's legs. The mare rears, and the idiot falls off her back, landing in the dirt with a thud.

Beast lunges at the horse and snaps again. The poor thing goes wild with fear. I don't blame her. She takes off through the trees and disappears into the darkness. Unfortunately for the rider, Beast doesn't chase the horse. I don't think he was really after her in the first place.

In less than a second, he's standing over the rider, holding the poor sap flat on his back in the leaves and dirt. The stranger's eyes flick to his sword, just inches out of reach. Beast leans in, his breath clouding the space between their faces. As much as I despise this man, I can't let Beast murder him. Can I?

Beast's growl stops, but he doesn't take his eyes off his prey. The man looks up at Beast's twisted, angry face and puffs out his chest. "Do your worst, foul creature."

"Really? That's your best line?" I grab a dead branch and aim the gnarled twigs at Beast. "Get off of him!" Even though I'm scared out of my mind that Beast is going to tear the branch from my hands and come after me instead, I try to sound angry. Unfortunately, I sound more like a little kid playing swords on the playground.

Beast turns his head. His hard silver eyes watch the branch. I wave it menacingly. Apparently, he doesn't like the idea of fighting a battle on two fronts, because he gives one last snarl at the stranger before leaping off of him and running to the safety of the woods.

The stranger gets up and gives a bow with a flourish of his hand. "Your assistance was unnecessary, but thank you for the thought."

I let the branch thump to the ground. "You've got to be kidding me."

But he ignores me and saunters over to his sword. "I should probably get you back to your castle. My name is Prince Ferguson, heir to the Kingdom of Spiddle."

The prince wipes his sword off on the ground, like there was ever any blood on it, and sheaths it before turning to me. "Now, where is this castle? I'm eager to meet the fair maiden that's kept there against her will."

Ferguson shakes his head. "I could never let you lead the way through a dangerous wood." An owl hoots overhead and Ferguson ducks, even though the bird is way up in a tree.

"There are fairy circles, among other things, that you need to watch out for, Your Highness." I hope he's not immune to the power of my sarcasm. "But I know how to get back to the castle and I can't exactly follow you if you don't know the way."

I don't move. "My name is Ivy. Seriously, do you talk to everybody like that?"

Even in the darkness, Ferguson's confusion is obvious. I roll my eyes. "Never mind. Let's go."

I lead him through the woods, picking a direction at random. Sure, I could have tried to explain the keeper spell to him, but there's no guarantee that he would understand. Besides, it's fun making him follow behind a "plain servant girl". He doesn't have that goofy grin on his face any more.

We make it through the woods in less than a minute. The moonlight bathes the grass in pale blue. Ferguson steps in front of me. "Well, that was easy enough. I suppose I didn't need you to lead us after all."

I bite my tongue as the prince swaggers up to the castle. I follow him and wonder if he always walks like that. It's got to be rough on his joints.

Without even asking, Ferguson opens the door, enters the castle, then prances up the stairs. He pauses in the hall, which has been lit with fresh candles. The orange light makes the hallway seem much smaller. Or maybe it's just Ferguson's ego taking up so much space.

I squeeze past him. "Why don't I just go and get her?"

He shrugs and nods, but Beauty is already coming out of her room.

Ferguson drops to one knee. "My Lady," he breathes. "Your beauty captures each moment in light."

Beauty's eyelashes flutter and her hand moves up to her heart. I roll my eyes. "What does that even mean?"

They ignore me. "I am Prince Ferguson, heir to the throne of Spiddle. May I have the honor of knowing your name?"

Beauty smiles and gives me a questioning look before giving the Prince of Spiddle her hand, which he kisses. "My name is Beauty."

"Never has there been a lovelier, nor more appropriate name," he says and kisses her hand again.

"Oh, please!" I walk up to the prince and wait for him to get out of my way so I can get into my room. Ferguson doesn't move. He pretty much just stares at Beauty with this plastic smile that makes me want to hit something. Like his face.

I wave a hand in front of his face, making him blink and finally snap out of the fantasy he's playing in his head. "You're not as charming as you think you are, and you're in my way."

"So is he!" I cross my arms and look down at Ferguson. "Are you going to move, Your Highness?"

Ferguson stands and flashes his smile at Beauty. "It's fine, Lady Beauty. She's only a servant and has no doubt been raised in the crudest of circumstances. If you would be so kind as to put me up for the night, we can leave this dreadful place at first light."

I slip past them both and close the bedroom door behind me, as Beauty and the Prince of Spiddle make arrangements.

He doesn't really think he can escape the forest, does he? I shuck off my shoes. Of course he does. He probably thinks he can charm snakes while singing God Save the Queen with his bellybutton. But I know better. Singing with one's bellybutton is no doubt a challenge, but I'll bet it's nothing compared to the keeper spell. With an enormous sigh, I launch myself backward onto the bed.

This isn't a good twist. I'm beginning to hate surprises. It's not that I wouldn't mind if he got lost forever out there, except for one thing. He wants to take Beauty with him.