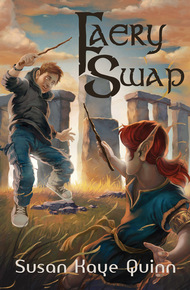 Susan Kaye Quinn is a rocket scientist turned speculative fiction author who now uses her PhD to invent cool stuff in books. Her works range from gritty Future-Noir to philosophical HopePunk, with side trips into royal steampunk romance and middle grade fantasy. Her bestselling novels and short stories have been optioned for Virtual Reality, translated into German and French, and featured in several anthologies.

She writes full-time from Chicago, inventing mind powers and dreaming of the Singularity.

Warrior faery princes can be very stubborn. Especially when they possess your body.

Fourteen-year-old Finn just wants to keep his little sister out of Child Protective Services—an epic challenge with their parentally-missing-in-action dad moving them to England, near the famous Stonehenge rocks. Warrior faery Prince Zaneyr just wants to escape his father's reckless plan to repair the Rift—a catastrophe that ripped the faery realm from Earth 4,000 years ago and set it adrift in an alternate, timeless dimension. When Zaneyr tricks Finn into swapping places, Finn becomes a bodiless soul stuck in the Otherworld, and Zaneyr uses Finn's body to fight off his father's seekers on Earth. Between them, they have two souls and only one body... and both worlds to save before the dimensional window between them slams shut.  Faery Swap is an action and druid-magic filled portal fantasy, told by both a runaway faery prince and the boy he's tricked into taking his place.   This Prince and the Pauper meets Warrior Faeries tale is suitable for all ages.  Includes 4 interior illustrations.

NOTE TO TEACHERS: A 2 minute book trailer and a 9 minute Virtual Author Visit video brings Author and Rocket Scientist Susan Kaye Quinn (Ph.D. Engineering) into your classroom, sharing her background in science and engineering and talking about her book, Faery Swap. A downloadable Teacher's Guide includes discussion questions, activities, and a Knowledge Seekers card-based game designed to be played in the classroom - all aligned to Common Core reading, writing, and college readiness standards for Grades 3-6. (Virtual Author Visit can be found at Susan's website)

Susan Kaye Quinn is another fabulous author who has graced the pages of previous StoryBundle offerings. In fact, I first met her when we were part of one of the earliest YA bundles here. Although Susan mostly stays on the SF side of things, her twist on a faery encounter was perfect for this collection, featuring an action-packed, magical cross-world adventure. – Anthea Sharp

Zaneyr stretched his fingers wide, relishing the cool breath of air between them. The swap had not been painful, but his new body ached with a rush of sensation. The human's clothes against his skin were soft as a rose petal, but the boy's satchel weighed like a stone on Zaneyr's shoulders.

He raised his eyes to a clear blue sky. Was there anything as beautiful as the morning sun? The fragrance of dew lingered in the air, and he sucked in a deep draught of it, closing his eyes. The smells. How he had missed them. Familiar, yet strange as a new day, he named the scents without opening his eyes. Buttercups, as sure as he was Faery. A hint of bluebells as well. A strong whiff of oak carried on the breeze. But most of the nature that once breathed here was crowded out by the thick, iron smell of human dwellings and mechanicks.

A whistle trilled in his ears, and he popped open his eyes.

A wisp of a girl stood before him, hair red like a berry and small blue eyes marked with concern. He would have thought her from the House of Eyr, if he had not known better. He studied her. If his father had sent a seeker after him, would Zaneyr be able to tell? He smiled at the thought of a mighty warrior faery trapped in the body of this slight girl-child.

Finn. An ancient name, strong and well fit for his purposes. And clearly this girl was no seeker. He gave her a small smile. "Aye, lass. Better than you know."

"Why are you talking so funny?" Her small nose wrinkled.

He quickly checked his ear with a touch, but it had grown round and short, just as Liranna had promised, in spite of the leanings of her House toward trickery and lies. But battles are lost for want of preparation, and so Zaneyr had selected this human for his hooded jacket, in case the swap had gone awry. Yet he had also felt a strange kinship draw him toward the boy. Perhaps because he was the same age as Zaneyr those many years ago, when the Rift unmoored his world from time.

The girl continued to stare at him, awaiting his answer. But if faery ears did not betray him, then it must be his words, already out of date with the human years passing a hundredfold more quickly. Zaneyr should have taken more mind of the boy's words before taking hold of his body.

"I am funny?" he asked the wee girl. "But you are not laughing."

Zaneyr searched for words to soothe the little one. His need to pass for human would only grow in the long stretch of years ahead, once the midsummer's eve was past. Convincing this small one would be his first test, but he was unsure which words would accomplish the task. He was saved from his struggle by a tall woman past the gate, calling to them.

"Erin!" she said, her voice filled with motherly concern. "Time for registration!"

The solution to his first challenge appeared before him. "Ah, Erin. Perhaps you should be going?" He doubted the next would be so easy.

Erin fixed a look upon him. "You're coming back to get me, right?"

Zaneyr blinked. "Aye. I mean, yes. Yes. When would that be?"

"At three. Just like always?" Her face turned full of sweetness. "Are you sure you're okay? Maybe you're sick, like last year when you stayed home from school for a whole week."

The entire solstice with the girl? An unnecessary risk, to be sure. Then it hit Zaneyr like a dawn breaking… this wee one shared a home with the human boy. She was kin. The boy had hovered over her, protective, like a brother. A bond—and the loss of it—that Zaneyr knew all too well. When his brother Ronaneyr was lost in the last swap, a year ago, their father had blackened the House of Eyr for the mourning period. For the king, the loss was tactical, but for Zaneyr, it was a lead weight in his heart, still. And a loss that finally allowed him to leave the Otherworld behind.

Zaneyr peered at the young sister of Finn. He vowed to respect that kin bond, as a brother would. It was the least he could do, having banished her brother to the eternal changelessness of the Otherworld. And perhaps the House of Finn would serve as good a hiding place as any.

She awaited his answer with an impatience too large for such a small thing.

"No, lass, you cannot stay home with me." He gestured to the loud guardian of the stone structure. "You need to stay here. But I will be back at the appointed time for you."

"But I think I will return home now." Zaneyr looked around at the many dwellings that crowded the path. "Which one would that be?"

Erin fixed that glare upon him again. "I memorized our address, already! When are you going to stop quizzing me?"

"It is the sickness," Zaneyr said with a smile. "It is stealing my memory like a thief."