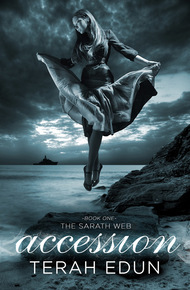 Sixteen-year-old Katherine Thompson wasn't trained to rule a coven. That was her sister – perfect, beautiful Rose. But when a mysterious plane crash kills off the heir presumptive of the Sandersville coven she has no choice.

After stepping in to fill her sister's shoes, Katherine realizes she didn't have a clue – faery wars, depressed trolls and angry unicorns are just the beginning. For centuries, her family has served the high Queens on both sides of the Atlantic but it is a well-known rule that mid-level witches stay away from high-level Queens.

But when Katherine's youngest cousin vanishes without a trace in the Atlanta court and no one wants to investigate, Katherine decides to step into the darkness on her own. She will soon discover that nothing, especially in a queen's court, is as it seems.

NYT bestselling author Terah Edun is another high-powered indie author I've had the joy of collaborating with recently. In addition to her bestselling series, Terah also curates very successful multi-author fantasy bundles on the side. I don't know how she keeps up with the impressive number of projects on her plate, but I suspect magic must play a part… – Anthea Sharp

You know the old saying 'If I tell you, I'll have to kill you?' Katherine thought wryly while she waited for her sister and Derrick to do their worst. Well, I have the opposite problem. If I show you my gifts, you'll be dead. There's no explaining, no second guessing. Which was why even though she was furious with her older sister, she couldn't defend herself. Not as a witch. Katherine might not like her sister, but she loved her. Loved her in the way that siblings that fought like cats and dogs, but still hung together against a common enemy did. Since they were rarely on the same side of anything recently, Rose and Katherine had yet to face anything worse than the schoolyard bully they had taken down together when Katherine was in kindergarten and Rose was in second grade. That incident had proved that blood trumped friends, at least in the all-out war over the marbles container, that is.

But now? Now, Rose and I never really see eye-to-eye at all, Katherine thought with a shiver. She must have been desperate to invite me on this stupid escapade. I know I was pretty stupid to accept the invitation. And now I'm going to pay for that. That hope that for once Rose wanted me along for me, as her sister…as a friend.