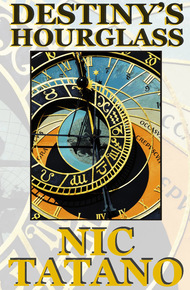 Nic Tatano is a HarperCollins author of the paranormal young adult Jillian Spectre series as well as a series of romantic comedies set in the world of television news, where he spent his career as a reporter. He also writes thrillers under the pen name Nick Harlow.

A native of Connecticut, he now lives on the Gulf Coast and still works as a freelance network television producer. You can write to him at nictatano@gmail.com

Seventeen-year-old Riley Jamison has always wondered why he could predict the future. Turns out he's not predicting it, he's changing it with his thoughts. Now he's in demand by the forces of both good and evil.

Riley must now develop his talents at The Compass, a school run by The Guardians, a benevolent group committed to changing the future for the better. And since Riley's powers are off the charts, he must resist the biggest temptation.

But changing the future is not without risks.... any action creates "ripples" in the timeline, which can be good or catastrophic. Riley is also confronted with a rogue Guardian who wants to manipulate the future for his own benefit... and let the ripples fall where they may.

DESTINY'S HOURGLASS is the story of a teenager who finds that great power not only brings great responsibility... but life and death decisions as well.

Nic Tatano adds a different flavor of adventure with his fast-paced story of a young man discovering his hidden powers. What teenager doesn't want to find out they are actually gifted with a super power of some kind? Of course, the hero quickly learns that with new powers come all kinds of new complications and challenges… – Anthea Sharp

Riley Jamison's feet touched nothing but air as he kicked in vain. He was a foot off the dirty green high school linoleum, pinned against his locker with one sinewy forearm by his own personal nemesis, Larry Pell. Nephew of NFL star quarterback Brian Collier, and currently wearing a red football jersey with Collier's number, nineteen. The no-neck blonde bully who was built like a Coke machine and outweighed Riley by a hundred pounds flashed a sinister smile. He twisted the front of Riley's worn plaid shirt and easily pushed his scrawny body a few inches higher. Riley's chest tightened along with his shirt.

"You know what happens when I don't get an A," said Larry, close enough that Riley could smell the lunch lady's chili dog on his breath. "I only got a B-plus."

Riley was determined not to let any fear show in his coffee-with-a-little-cream eyes. He jerked his head to the side, sending his mop of unkempt dark brown hair out of his face. "Hey, I did your homework for you," he said. "You would have flunked without me."

Larry's pale blue eyes narrowed. "Oh, are you calling me an idiot?"

What the hell. He's gonna hit me anyway. Might as well take my best shot.

"You're the one wearing your IQ on your shirt."

In a split second Larry's free hand balled into a fist and rammed into Riley's stomach, driving all the air from him. His back banged against the locker, the echo rang through the hall.

The door to the teacher's lounge immediately flew open with a noticeable sharp squeak and Larry released his grip. Riley fell to the floor, doubled over, gasping for air. Larry leaned down and whispered in his ear, his crew cut rubbing Riley's cheek and feeling like a wire brush on his skin. "The beatings will continue until morale improves."

Fast heel clicks on the floor told Riley a teacher was on the way.

"What's going on here?" He recognized the voice belonging to Ms. Haver, his middle-aged calculus teacher and a stickler for discipline.

"Nothing," said Larry, standing up quickly. "Riley just tripped and hit his head on the locker."

She crouched down, grabbed his chin with her rough hands and lifted it up. "That what happened, Riley?"

He jerked his head away and nodded. "Uh-huh." He started to get up, knowing he had to avoid her piercing hazel eyes that were like truth serum. A sharp pain shot through his side and pushed him back down.

The tall, slender teacher with a brunette bun of steel whipped her head around at Larry. "Don't you have a class, young man?"

"Yes, Ms. Haver." He shot a quick smile at Riley, turned and walked briskly down the hall.

The teacher turned back to Riley and extended a hand. He didn't take it, pushing himself off the floor.

She reached for him but he backed away as he brushed off his faded jeans with the frayed cuffs. A few students began to gather around to see what the commotion was. Riley tried his best to avoid their eyes. "I'm okay, Ms. Haver. Just leave me alone, please."

"You don't look well. Do you need to go see the school nurse?"

She softened her tone and lowered her voice. "Riley, I can't help you if you won't let me help you."

"Whatever. I'm late for class," he said. Then he walked away, wincing with every step.

If he were like most kids, he would have run home.

But he knew things weren't any better there.

Riley tried his best to get comfortable on the faded blue velour couch, searching for a position that would silence his screaming ribs while letting him watch the football game.

He tried focusing on the action to take his mind off the pain.

His foster parents weren't home for a change, giving Riley and his revolving door siblings a rare shot at the television and a night free of yelling.

Jack, the lanky, sarcastic sixteen-year-old with a thirty-year-old brain who shared his bedroom, occupied the other end of the couch. He noticed Riley was fidgety. "You okay?"

"Not really. Got hit today." Riley winced as he cocked his head in the direction of the television, which now featured Brian Collier barking out signals as he surveyed the defense. "His nephew."

"Yeah, Larry's a jerk," said Jack. "Maybe if Collier did something stupid tonight it would take him down a notch."

"Would be nice," said Riley, as he looked at Larry's uncle. His eyes narrowed, shooting hate at the man who was the hero of his nemesis. Riley felt his anger reach a boiling point as he focused his emotions on the television screen.

I wish Collier would break his friggin' neck.

If Roxanne Holloway didn't move fast, the seventeen-year-old boy was going to snap the neck of the NFL's greatest quarterback.

The brainwave telemetry from the New Jersey kid was off-the-charts strong. Unheard of for someone of that age. But she found the content disturbing as she read Riley Jamison's thoughts on the monitor.

I wish Collier would break his friggin' neck.

She punched the red button on the console that placed an emergency call as she kept an eye on the secondary screen that featured both the brainwaves of Riley Jamison and the football game he was watching. The quarterback was on the sidelines but would be in the game shortly.

And then Riley's ability to change the future would kill him.

But what really got her attention were the ripples that filled the primary screen and were growing at an exponential rate.

If quarterback Brian Collier was dead, he wouldn't be able to continue his incredible fundraising and charity work.

Thousands would be affected in the future as Collier's death rippled through time. And the effects wouldn't be good.

She drummed her long red fingernails on the desk as the commercial ended. Her pale blue eyes were locked on the screen as the quarterback put on his helmet and headed onto the field. C'mon, c'mon…

She spoke quickly. "I have a prodigy about to take a life. Need immediate intercept. Sending telemetry."

She hit the "send" button on the keyboard.

The monitors which lined the walls of her small office seemed to close in on her. Her heart slammed against her chest as the huddle broke. Collier put his hands under center, took the snap, backpedaled—

Roxanne exhaled as Brian Collier avoided a sack and completed a pass. She pushed her shoulder length honey blonde hair behind her ears and leaned back in her burgundy leather high-backed chair. "That was close."

"Oh my," said the Guardian.

"You weren't kidding. This is quite the prodigy."

"I couldn't help but notice. In fact, Riley Jamison may be the prodigy. We must move quickly before Luna's people get their claws into him."