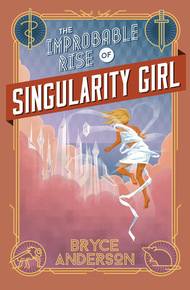 Bryce Anderson wrote his first book at the age of six. It had time-traveling dinosaur robots. Also fighter jets. That was all the plot it had, and as far as six-year-old Bryce was concerned, that was all it needed.

In an alternate dimension, Bryce rules the five lunar colonies with an iron fist. In this one, he resides in Salt Lake City, where he writes, codes, drinks an unhealthy amount of coffee, and tries to live each day as though it was the most recent in a long sequence.

The Improbable Rise of Singularity Girl by Bryce Anderson

Helen Roderick thought life would be easier after she died. Once her neural paths were scanned, once she was simulated by an enormous bank of computers, everything would be awesome. No more aging, dandruff, sweat, or any of the other drawbacks of hauling her own squishy meatsack hither and yon.

But her virtual life is a troubled one. As she learns to enhance her own intelligence, the government takes notice, trying to shut her down and steal her research. When a nuke detonates over Manhattan, Helen devotes her growing power to bringing the culprit to justice. She uncovers a force bent not on geopolitical power, but on the extinction of all humankind.

Will our heroine be enslaved or deleted by the Feds? Can she avert an impending war with China? How will she find time to finish her doctoral thesis? And (hey, we're trying not to judge) isn't Dr. Mellings way too old for her? The Improbable Rise of Singularity Girl is the story of a singular woman living at exponential speed.

Most AI stories make the mistake of having scientists create something sentient, but it becomes more sentient than they had planned. As a computer scientist myself, however, I have never been able to buy that whole "sentience by design" gambit. If we don't understand how human consciousness works, how can we ever expect to build one? But Anderson's approach seemed at once so brilliant and so obvious that I was immediately fascinated. Why hadn't anybody ever taken this angle before? I don't want to ruin the story for you, so let me just say that the AI in Singularity Girl doesn't begin with some hyper-clever act of scientific creation—it begins with a simple suicide. (Read the full IOD Report.) – Jefferson Smith

Knowing full well that it was a mistake, a misdirection of his grief, he brought up Dr. Whitmer's contact on his phone. Home line. Dialing. Three rings.

"Who the hell?" slurred a barely conscious voice.

"Four AM. A perfectly uncivil hour, wouldn't you agree?"

"Then why in god's name do you have one of my grad students up at four AM working on equipment for you? It looked like she was building Frankenstein a pacemaker."

An exhausted groan came through the phone. "What are you talking about?"

"Helen Roderick is in the building, putting together some contraption down by the freezers. I don't care if she volunteered to do it, you can't retask one of my grad stu-—"

Now he sounded more alert. "I still have no idea what you're talking about. I never asked Miss Roderick to build me anyth-—"

William hung up, then burst out of his office in a dead run. His phone started ringing, but he ignored it. "Roderick!" he shouted, now completely panicked but not completely sure why. He sprinted back to where he'd run into her, but the equipment was gone, and Helen with it. Room by room he searched, finding no sign of her. Maybe she'd packed up and gone home, or taken the elevator to another level. But a feeling of apprehension prodded him toward the deep freezer, the only place on the floor he hadn't checked. He slid the heavy door on its rollers and flipped the light switch.

It was like stepping into a horror movie. Helen lay naked under harsh fluorescent lighting, stretched across some sort of gurney. A halo of thick needles ringed her head, each one buried deep in her skull. Her body was connected to a pair of machines by a profusion of wires and tubing. The machines gave off occasional whirring and sucking sounds. Something went 'parp.'

Dr. Mellings willed himself to step closer. The woman's skin was already pallid and ice cold to the touch, her mouth open slightly, as though frozen in mid-sentence. Her eyes were wide and staring straight up at the light, her expression serene, almost hopeful.

He didn't remember getting his phone out, but as his finger hovered over the '9' to dial 9-1-1 he noticed two envelopes taped to Helen's chest. One read, "TO DR. MELLINGS," and the other, "TO WHOEVER FINDS ME." Figuring that both were for him, he opened the second one first.

To Whoever Finds Me,

Sorry about the mess, and for startling you. Please read these instructions carefully before doing anything. First and foremost, whatever you do, do not unhook me from this device. It would be really gross if I unthawed.

Second, bring Dr. William Mellings here and instruct him to read his note before you involve the authorities. Dr. Mellings will know how to get me back up and on my feet, although it might surprise him to hear that.

Lastly, if the gauge on the machine dips into the red, replace the liquid nitrogen tank with the one under the table. The freezer is cold, but not cold enough.

I know it's a small consolation, but I left a tub of ice cream on the shelf for you.

Hands trembling from the shock and the cold, he opened the other letter.