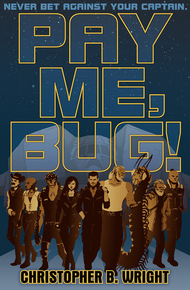 Writer, former musician, occasional cartoonist, and noted authority on his own opinions, Christopher B. Wright's weakness for tilting at windmills has influenced every facet of his adult life. He enjoys reading and writing fiction. He also enjoys writing about himself in the third person. He refuses to comment on whether writing about himself in the third person also qualifies as fiction. He currently lives in Alabama with his wife, daughter, dog, and his overpoweringly large ego.

Pay Me, Bug! by Christopher B. Wright

Grif Vindh, Captain of the Fool's Errand, just pulled off the job of a lifetime: against all odds, he and his crew smuggled a rare anti-aging drug out of Ur Voys, one of the most secretive and secure facilities in the Empire of the Radiant Throne. It was every smuggler's dream, the "Big Score," and they find themselves filthy rich as a result.

But their good fortune attracts exactly the wrong kind of attention: the Alliance of Free Worlds has been trying to infiltrate Ur Voys without success, so they conscript the only man who has: Grif Vindh. The Radiant Throne, desperate to know how their security was so easily thwarted, send one of their best to track him down and learn the truth... by any means necessary. Grif and his crew must perform the impossible a second time: break into Ur Voys, steal something so secretive their employers don't really know what it is, and get away clean.

Along the way they'll have to deal with deadly spies, psychotic telepaths, vicious cyborgs, inconvenient family ties... and a hyperintelligent bug who always bets against its captain.

One of the harder things to put into a story is a believable sense of history between the characters, but Wright makes it seem easy. I was immediately drawn to the sense of cameraderie between the captain and his crew in this rollicking space adventure. At once easy and familiar with each other, but also professional and competent at their jobs. I instantly wanted to be a part of the good natured banter among these freelance rogues. It felt like I was back on board the Serenity, and that feeling never went away. (Read the full IOD Report.) – Jefferson Smith

Grif Vindh, Captain of the Fool's Errand, peered over the navigation console display and frowned. "Damn it all," he said, "it did it again. What the hell is wrong with this thing? The screens don't even try to drop."

"Not a problem on my end." The frustration in Cyrus' voice was evident even over the intercom. "The gun is sending the drop code."

This was Grif's third refit. He remembered hating the first two—the first when he'd been the pilot on someone else's ship, the second shortly after he'd purchased the Fool's Errand—but he'd largely forgotten why. Now he remembered: buying and installing new technology was easy. Trying to get new technology to integrate properly was nearly impossible.

"That's all very nice," Grif said into the intercom, "but there is a problem down there, Cyrus, because your guns also keep sending the fire code at exactly the same time."

A storm of vulgarity erupted from the intercom as Cyrus investigated the problem.

Grif and Morgan were on the bridge running a simulation with Cyrus, who was in the main gunnery bay. They were trying to get their new screens and sensors to communicate properly with their new guns. This was important: firing an energy weapon into your own screens was not only tactically unsound, it was professionally embarrassing. At that moment professional embarrassment was winning by a wide margin.

"Oh, hell," Cyrus said, "this is a ruddy mess. It's just going down the checklist without waiting for a response from sensors. Morgan, are the sensors even working?"

"Don't be idiotic," Morgan snapped. They'd been at this for hours, and this was Morgan's first refit—his patience was badly frayed. "Shipboard sensors are working just fine. They are detecting that the screens are up and sending out the lock-flag just like they're supposed to. They're even receiving the drop code your idiotic guns keep sending... but they can't pass that on in time when your guns send a fire code at exactly the same time!"

"Well it's not exactly the same time," Cyrus said. "It's a hundredth of a second after. Like I said, it's going down a checklist."

"Does the checklist have an entry for 'wait for the sensors to tell us the screens have dropped before firing the gun?'" Morgan asked.

"Of course it—er..." Cyrus' voice trailed off. A moment later, in a more subdued tone: "let's try this again."

Grif grinned in spite of himself, and hunched over the Nav station once more. "Screens dropped! Fantastic! This calls for a drink. Or maybe ten... wait. Cyrus, are your guns still firing?"

"No." Morgan and Cyrus answered simultaneously.

Grif sighed. "The screens aren't coming back up."

Once again profanity erupted from the intercom.

Morgan pounded his console in frustration. "I can't believe we paid money for this! Technology is supposed to work."

"That's exactly the kind of nonsense I'd expect to hear from a scientist," Grif said. "Cyrus, do you figure you need to look at the screen code?"

"Maybe," Cyrus said reluctantly. "Ktk would get through it faster, though."

"Ktk is trying to bring our fusion drive online," Grif replied. "And I'd rather it focused on that. I like not exploding."

"I've been going through targeting code all morning," Cyrus complained. "We need another programmer on board."

"I'm serious. I can't patch communications to sensors and do both any more. We've got a military-grade sensor array now. It's complicated."

"I know," Grif repeated. He turned his attention to a log of the last simulation and tried to determine what prevented the screens from coming back up. "It's not like I'm putting it off or anything. There just hasn't been a lot to work with around here over the last month. All the good people have already signed on to other ships, and I don't want another Doma."

"If you say so," Grif muttered. "I never understood what drove her to motherhood in the first place. But I guess we can ask her in a day or two. When I told Halge we were starting systems integration he said he'd send the team down soon."

"Nervous?" Grif tried not to grin.

Morgan didn't respond: he was staring at the data scrolling across his screen, tugging at his beard thoughtfully. "Grif, we're testing screen segmentation, right?"

"... yeah..." Grif glanced over at the summary display for the screens. "12 segments per axis. And we're trying to get segment 9-6 to drop, if that's what you're going to ask next."

"Wasn't going to," Morgan said. "I think I just figured out one of our problems. Sensors were reporting all segments were up—even 9-6—when you reported they'd dropped."

"I believe you," Morgan said. "The simulation display reported it to you, but the segment didn't report its changed state to the internal sensors. As far as internals were concerned, all screens were up."

There was a short silence. "Are you saying that because the screen didn't report that it was down, it didn't know to bring itself back up?"

"That makes sense," Cyrus said. "The segment would wait till it was given an all clear before coming back up. And before you ask, Grif, yes. The gun sent the all clear properly."

"It did," Morgan said. "But internal sensors didn't send it to the screens."

"Well why not?" Grif asked irritably.

"Because the segment didn't report that it was down," Morgan said. "The sensors discarded the message as irrelevant, because the as far as it was concerned, all screens were up."

The intercom buzzed. It was Hari.

"Grif, we have a slight problem in Bay One." Hari sounded quite upset.

Grif frowned. "What kind of problem is that?"

"Well. Your sister is here."

"That is a problem," Grif agreed, "but let her in anyway."

"With about thirty people," Hari added.

Grif sighed. "I'll be right down."