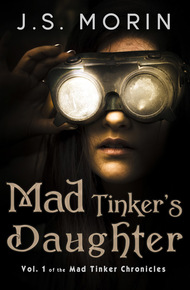 The world told her >No. She didn't listen.

Madlin Errol is heiress to the greatest fortune in Tellurak. Her father, the Mad Tinker, has built an empire by crafting devices that no one else in the world could match. Madlin grew up spoiled, given everything she could wish for: the finest tools, all the raw metals she could ask for, and a workshop of her very own. Yet in her sleep, she lives another life, in another world.

Korr...a world where humans are subjugated, working menial jobs or even enslaved. The ruling kuduks treat them like talking animals. In that world, Madlin is known as Rynn, a girl who grew up without her parents, mired in the depths of an underground city, sleeping in a boiler room. But unlike so many of her fellow humans, she has seen a world where there are no limits. She, and a growing number of human rebels, have begun to fight back.

This story is built on an unusual twist. I understood right from the outset that something odd was going on. Pairs of characters seemed to be "twinned" in some fashion, but the nature of how that worked was a doled out slowly, and worked as a lure that kept pulling me further and further into the adventure. It's a delicate balancing act for an author to keep something as fundamental as "how reality works" as a mystery from the reader, and yet not alienate them from the story, but Morin manages to do just that. And when that slowly unfolded into not one, but two steampunk worlds, each with a rich and well-lived-in feel to it, I was hooked. (Read the full IOD Report.) – Jefferson Smith

Rynn hated dragging everyone down to her workshop, so she didn't. Instead, they met later at one of the rebel safe-rooms that popped up around Eversall Deep faster than the Judicial Enforcement Division could chain them shut. The one she had taken them to was a disused water treatment station for a section of mine that was shut down due to a recent accident.

Rynn had cross-shorted the spark lights to steal power from a restaurant a layer up, bathing the dank chamber in washed out light and shadows from a maze of pipes. The floor was metal grating, and from far below there was the rushing sound of water passing beneath. The air was dank and smelled of stale wastewater. Long corridors ran off in four directions, each lit at intervals.

"That's everyone," Rynn said as Tabby arrived. They were all dressed for mischief, with clothing to cover eyes and faces should knockers stumble onto them by chance. Sooner or later someone would notice the power draw on their system and come to investigate, but it was the sort of inquiry that ought to take hours, if not days, to trace.

"I'm guessing you've got a new toy," Rascal said. He was wearing breather cloth over the lower half of his face—a sensible precaution against the stink. "Let's see it."

"You've got no sense of drama, do you?" Rynn asked in reply. She had on a long, heavy coat that protected against the chill of the wet air that wafted through the corridors. It also concealed the aforementioned toy. Rynn reached inside and pulled out her latest device.

No-Boots let out a long whistle, Tabby looked wary, and Hayfield waited with his arms crossed for her to explain it.

"Nice. Work any better than the last one?" Rascal asked.

Rynn held the coil pistol and turned it every which way, showing them all sides of it. It looked like a miniature version of the rifle she had derailed the trolley with, but the barrel was much shorter, wrapped with the wire she had stolen from Professor Hurmbeck. "That's for aiming. I salvaged it from a pair of opera glasses," she said, pointing to the opera glass on top, affixed via a hinge and adjustment knob. She had mounted the cylindrical housing of the runed dynamo under the barrel, running parallel. The spark wires running from the dynamo were twisted together with the leads of the coil. A carriage hanging off the back of the barrel was filled with ball bearings, pushed forward by a spring.

"Chipmunk, I know you squint when you aim, but maybe it would be easier gettin' some spectacles," Hayfield suggested.

"I see just fine," Rynn insisted. "This thing has more range than you're used to though. I tweaked the sight until it was lined up perfectly. You see it in this eye-piece—you put a hole through it when you pull the trigger."

"Prove it," Rascal said, playing along.

Rynn found a locked toolbox and dragged it into position, making a few minor adjustments. She then climbed atop it.

"What's she doing up—" Buckets started to ask, but was cut short by an elbow to the ribs.

"Cap it," No-Boots said. "Just watch her." Both boys did just that.

Rynn stood looking down the row of spark lights in one of the corridors. She raised the pistol to eye level, holding it in both hands. It was heavy—far heavier than Madlin's eight-shooter—and more than she could hold steady in one hand. It took her a moment to get the shot lined up just right.

She pulled the trigger.

The whole corridor went dark. Whatever noise the coil gun made was lost in a chorus of shattering glass that echoed in the water treatment station.

"Won't do that anymore," Rynn replied. "I took the adjustment out once I worked out a good setting. Also kept the recoil from breaking my wrists."

"So this is what you need your cut of the loot for?" Hayfield asked. He came over to Rynn, and she handed the coil gun to him.

"Most of the parts are scrap. It's not free, but I can scrounge a lot of it. The dynamo needs lodestone though, the more refined the better. That stuff isn't cheap."

"How far in hock did you go to pay for that thing?" Rascal asked. He cocked his head and gave Rynn a skeptical look.

Rynn blinked. "What? No, I didn't borrow money to make it. I need the coin to build some for you girls."

Buckets's face lit like a spark bulb. "I get one of those?"

"Yeah, with guns like that we'll show the knockers who's foreman down here!" No-Boots clenched a fist and thrust it in the air.

"That's the idea," Rynn agreed. "No more running every time we get found."

Everyone turned to look at Tabby. She stood with her arms crossed and an expression cast in bronze. "This ain't what we are. Chipmunk, you can go playing tinker all you like, but don't drag the boys into it. And don't think I can't see a gleam in your eye as well, Rascal. We're bandits, thieves. We steal because we can't get by on the scraps we're allowed from the layers above. We ain't killers."

"You sure about that?" Rynn asked. She looked to Hayfield and his braided beard. She turned to Rascal, who gave a sheepish shrug.

"Dammit, child! Don't you read the papers? The knockers never figured who did that trolley knockover. They hanged some poor nuggets who had nothing to do with it. Needed someone to blame; it's elections coming soon, and Mayor Karbiken can't look like he's got a deep runnin' wild with rebels."

"I ain't hearing a reason not to arm ourselves better," Rascal said. He spread his hands, one to Rynn, one to Tabby, as if trying to bridge a gap between them.

"We bloody them, they take it out on ours," Tabby said. "Our own kind's blood on our hands? That what you're after?"

"They bloody us whenever they feel like it," Rynn countered. She held up her coil pistol. "They need to have someone push back—hard—or they're never going to let us be. Freedom is the power to take control of our own lives. I can build us the means if you have the will to use it." How could Rynn explain what she had seen in Tellurak: humans ruling the world, walking free everywhere, with no kuduks, no daruu, and no collars around their necks. Somewhere in the depths of Tellurak's history, there must have been a similar fight, which the humans had won. Korr needed champions to give humans that same freedom.

Tabby shook her head. "Thieving is one thing, but I can't be a murderer. Buckets, No-Boots, come along. I'm the closest thing either of you's got to a mama, and I ain't letting you two throw your lives away. Rynn's too old to listen to me anymore, looks like."

She took the two lads each by the arm and towed them away from the maintenance station. Buckets turned his head, looking back at the others as he allowed himself to be led away. No-Boots yanked his arm away before they disappeared from sight.

"I'm staying with Chipmunk," he proclaimed.

"So, we're down to four?" Rynn asked as No-Boots rejoined them.

"It'll be five," Hayfield said. His voice was somber. If anyone had killed his share of kuduks, it was Hayfield; there was no questioning his resolve. "Pick won't blink. He'd trade his mum's ashes to get a gun like that."

"So would I," Rascal added.

"I think I did," Rynn said. She hung her head. "It's her I got the magic from to light the runes. She'd hate this." She straightened up. "But this is our world. We, the living, need to fight for it."