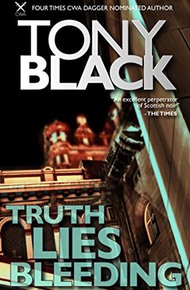 Tony Black was born in Australia and grew up in Scotland and Ireland.

Based in Edinburgh he is an award-winning journalist, editor, and novelist. His journalism has appeared in the UK national press and his short fiction in a variety of publications.

He is the author of the novels: PAYING FOR IT, GUTTED, LOSS, LONG TIME DEAD, TRUTH LIES BLEEDING, MURDER MILE, THE STORM WITHOUT, HIS FATHER'S SON, THE INGLORIOUS DEAD, THE LAST TIGER and ARTEFACTS OF THE DEAD.

Four teenagers find the mutilated corpse of a young girl stuffed into a dumpster in an Edinburgh alleyway. Who is she? Where did she come from? Who killed her and why? Above all, where is the baby to which she has obviously recently given birth? Inspector Rob Brennan, recently back from psychiatric leave, is still shocked by the senseless shooting of his only brother. His superiors think that the case of the dumpster girl will be perfect to get him back on track. But Rob Brennan has enemies within the force, stacks of unfinished business and a nose for trouble. What he discovers about the murdered girl blows the case - and his life - wide open.

Irvine Welsh's favourite crime writer? A star of tartan noir. These streets aren't just mean, they're downright deadly. Black's probably a new name to you. I guarantee you'll be devouring more of his novels after this. – Steven Savile

THE GIRL'S SCREAMS WERE ENOUGH to give away their hiding place. It took a lot of noise, a racket, to have heads popping out of windows in a Muirhouse high-rise but it wasn't the noise alone that alerted the neighbourhood.

The young girl didn't recognise her own voice – it was loaded with an emotion she hadn't heard before. The tone was higher, seemed to tremble more. It was as if she had somehow tapped into a world she'd only encountered on television, or at the cinema. It sounded alien to her.

The three teenagers surrounded their friend. They'd been smoking, drinking, having a laugh and a joke, whiling away another day that they should have spent at school. But this wasn't any other day; Trish knew it the moment she had started to scream.

The girl stood rigid. When her friends touched her she jerked herself away and started to shiver. Tears fell down her cheeks soon after. They felt cold on her hot skin.

She felt the colour draining from her face. She closed her eyes tight, tried to shut it all out but the images were still there inside her head. She started to bite her lip. Her breathing altered, became shorter. She felt the corners of her mouth turning down and her whole head now seemed to be shivering out of control. More tears came. The shivers stopped suddenly, then instantly started again as she opened her eyes and held up her hands.

Trish knew the streaks of blood were spotted by the others at once. They were dark red smears moving slowly down her fingertips towards her palms. It took her some time to register the blood was actually on her hands – nothing seemed real now – but when she became aware of what she was looking at her mouth opened wide and her throat tightened.

No sound came from her. As the girls stared at her everything felt like it was locked inside her. Trapped.

Her mouth widened some more; she started to gag, wanted to be sick but nothing would come out except a noise. A shrill, desperate animal wail. The others stepped back. They watched Trish shaking as she screamed out. She stared at her hands, and felt her eyes widening at the sight of the fresh blood.

'Keep the noise down!' A man hung his head from an open window in the high-rise above the alleyway. He turned to the girls below, looked down, but didn't call out a second time.

The girls stared at each other, looked scared. One shrugged. Another ran to Trish, clamped arms around her.

As her wailing turned to sobs Trish fell into her friend, weeping and shaking. The young girl held her, trying to keep her steady on her feet but the pair were forced to slump onto the ground.

The other two girls watched for a moment, then one of them pointed back up the alleyway. There was a large bin on wheels, a communal bin, a dumpster. A few moments earlier Trish had gone over there to drop off an empty bottle.

She watched the girls staring at each other, wondering what she'd seen. She could tell that thoughts were passing between them: they were curious.

One of the girls started to walk; the other followed.

Trish tried to call out, to bring them back, but words still wouldn't come out.

She watched them go. Tried to claw out to them, pull them back.

They kept walking up the alleyway.

It was a large bin, almost as tall as they were. When they got up close they pointed to the bloody finger-streaks. Trish watched as they turned to each other as if to ask, 'What's inside?'

For a moment they stared on, frozen, then one spoke.

The girls stood, unmoving. Trish tried again to call to them but all that came from her now was screams, shrill roars she couldn't control.

They looked back, then, 'We'll do it together.'

They reached out hands, raised the lid of the dumpster.

Their breathing looked to have stilled as their thin arms pushed the black rubber lid back. The dark interior of the vault was exposed now. For a second or two the girls peered into the blackness, but didn't seem to see anything. They drew closer, raised themselves on tiptoes.

As they edged nearer the rim, Trish remembered the sweet smell that had come from inside. She knew it would take a moment for their eyes to adjust to the darkness inside the bin, to make out the light and shade. To piece together familiar shapes, in an unfamiliar setting. To take in with their eyes what their minds wouldn't want to believe.

In the next few seconds the air filled with the screams of two more young girls; they were running from the alleyway.