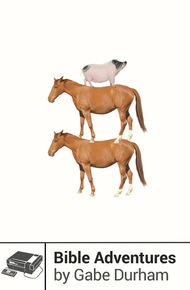 Gabe Durham is the author of the books Fun Camp (2013) and Bible Adventures (2015), and the editor of Boss Fight Books, a series of books about video games. He and his projects have been featured in The Onion A.V. Club, Nylon Guys Magazine, The Brooklyn Rail, Kotaku, Largehearted Boy, and Julie Klausner's "How Was Your Week" podcast. He lives in Los Angeles.

In the beginning, a small unlicensed game development company was hit with divine inspiration: They could make a lot of money (and escape the wrath of Nintendo) by creating games for Christians. With the release of the 1990 NES platformer Bible Adventures, the developers saw what they had made, and it was good. Or, at least, good enough.

Based on extensive research and original interviews with Wisdom Tree staff, Gabe Durham's book investigates the rise and fall of the little company that almost could, the tension between faith and commerce in the Christian retail industry, culture's retro/ironic obsession with "bad games," and the simple recipe for transforming a regular game into a Christian game: throw a Bible in it and pray nobody notices.

"As you might recall, we've had multiple other Boss Fight Books titles in other Video Game StoryBundles, and this is one of my favorites to date - a meticulously researched history of Christian-themed Nintendo games (yes, this tome also covers Super 3D Noah's Ark!) with a very, very bizarre backstory. Love it!" – Simon Carless

When I was seven, my family moved from Springfield, MO, to Annandale, VA, so my mom could go to grad school and my dad could become the new preacher at the unfortunately named Falls Church Church of Christ. Since before I was born he'd been preaching in the Churches of Christ, a mid-size Protestant denomination known for its a cappella singing, full immersion baptism, weekly communion, and slavish emulation of the practices of the Early Church. Like the Baptists, a lot of Churches of Christ had in previous generations boldly claimed to be the One True Church and the Only Path to Heaven, but they were beginning to chill out on this point by the time my dad came on the scene.

I learned early on that we Christians and our wares were set apart. We had our own symbols—cross, fish, crown of thorns—and our own buzzwords, like "sanctification," "fellowship," and "atonement." You could throw these words around at church with a straight face, but you got the sense (or learned the hard way) they wouldn't play well at school. You were made to understand, too, that not everyone at school or in "the world" (as in: the secular world) went to church or prayed at dinner or would be joining you in Heaven, which was sad but necessary. Sometimes, you were warned, your peers in the world would Persecute You for Your Faith because of the influence of Satan, and that these doubters would try to trick you into not believing in God. But you had to keep believing in God because it was believing that kept you in Heaven, a clean place where your family was, and not Hell, which, not to like scare you or anything, was worse than the worst feeling you'd ever felt in your whole life, and you felt it for all of eternity, which is a billion years times a billion only way longer. So believe, go to church, and buy Christian stuff.

Obviously you didn't have to buy nothing but Christian stuff. You didn't have to ask your grocer if the farmer who grew your onion was a Christian, but it was a pretty cool bonus if you happened to buy a Christian onion. And it wasn't like you couldn't enjoy the Beatles, except in the homes of a couple of sad kids whose parents were still mad over John Lennon's "more popular than Jesus" line. It was that you got bonus points for liking DC Talk, Michael W. Smith, or better yet in the Churches of Christ, instrument-free singing groups like Acappella.

My church had a children's lending library that was basically just a little cart that got trotted out every Sunday morning, full of Christian picture books retelling some of the more parentally appealing Bible stories—more of them about the time Jesus duplicated sashimi for hungry followers than about the time Jesus resupplied the booze at a wedding reception.

To check out a book from the library cart, I think you simply wrote your name and the book's title in a little log and then brought the book back when finished. If this part of my memory is hazy, it's because I didn't often go in for books about the same stories I heard in church Sunday mornings and again in bonus church on Sunday evenings and Wednesday evenings. On my own time I mostly dug into my ever-expanding personal library: Choose Your Own Adventure, Roald Dahl, Calvin and Hobbes.

There were, however, two items on the lending library cart that were of enormous interest: NES games called Joshua & the Battle of Jericho and Bible Adventures. "FOR PLAY ON NINTENDO" read yellow text on a black bar at the bottom of each box—and then above it was the small pink logo for a company I'd never heard of: Wisdom Tree. I didn't care that these cartridges were black instead of gray, slimmer than a normal cartridge, or that they required you to cram the cartridge into the front of your Nintendo without pushing it down. I guessed it had something to do with the fact that these games were Christian.

I'd try any game once, and the fact that these games were free to borrow blew my addict mind. My local libraries didn't even lend out VHS tapes yet, let alone something as precious and expensive as a Nintendo game. Weekend game rentals ran you four or five dollars, a new game could be bought at 40 or 50 dollars, and yet somehow these had wound up on an honor system cart, being treated like something as worthless as a book.

So when I took the Bible games home with me that Sunday after lunch—hopes high, expectations low—I was pleased to find that both games were kinda fun.

Bible Adventures is a three-in-one platformer starring Noah, Moses's mom, and David. My favorite of the three was Noah, who must gather two of every animal for his ark before the flood. It was a game for collectors, a Pokémon before Pokémon. The gathering of creatures was an activity not so different than the slow, pleasing accumulation of Marvel Masterpieces superhero cards that several of my friends and I were racing each other to collect, carefully placing new cards in glossy sleeves in numerical order. In "Noah's Ark," I liked the job-well-done feeling of having both pigs crossed off my list the same way I liked checking off marks on the little list that said which cards I had and which ones I needed.

Joshua is an uglier game but it was one I could play for longer, a maze crawler where you're trying to collect all the little thingies to make a magic door appear. You shot music itself from your person, which first made enemies angry, then killed them. Truth was, it wasn't much of a battle for Jericho. It played out more like the story of a little man, buried in dirt, trying to sing his way out.

What I appreciated about Bible Adventures and Joshua, playing them for the first time that Sunday afternoon, was that neither was as mercilessly difficult as many of the games I'd lately been playing. For every well-balanced platformer like Mario,Mega Man 2, or Bugs Bunny Crazy Castle, there was a demonically challenging Game Over delivery device like Ghosts 'n Goblins. In those early days, games were pricey enough that I was allowed maybe three purchases a year and a rental a month. I'd pick up a game based only on its epic box art, die four times per minute, and be filled with regret for having chosen the Wrong Game. The few times I bought the Wrong Game or received it for Christmas, I was filled with the entitled child's sense of having been supremely cheated by the universe. "I could be playing a Konami code-busted game of Contra right now. Why did I take a chance on Ikari Warriors?"

The Wisdom Tree games were made of softer stuff, and I was okay with that. I wouldn't have paid Toys "R" Us prices for Bible Adventures (not that Toys "R" Us stocked it) but I might've paid FuncoLand prices. Certainly these games outperformed so many lame licensed games like Ghostbusters, T&C Surf Designs, orThe Uncanny X-Men. But instead I played the games for a couple weeks, dutifully returned them to the church cart, saved up for and bought a Sega Genesis, and for twenty years never looked back.

A year ago I started my own company, editing and publishing a series of books about video games. I contacted people I admired and asked them to write books for the series, and most of those writers said, "I know just the game I'm going write about." The subject of my own entry in the series was far less obvious to me. I thought about some of the games I loved best: A Link to the Past, Chrono Trigger, Super Mario 64. Perfect games made by Japanese guys I'd never meet in a language I'd never speak. But what did I have to say about Mario 64? It just felt good to play it. And then I remembered Bible Adventures, a game I'd never owned that had been heavily marketed to members of a faith I'd mostly left behind. As I read every single article I could find about Bible Adventures and the semi-defunct company that made it, I discovered that, despite the fact that the game was neither one of my best-loved or most-hated, Bible Adventures had one of the weirdest development stories in all of video gaming's short history. It was a story that delved into plucky entrepreneurs, seat-of-the-pants coding, corporate muscle, horror movie rights, the Christian retail industry, and crises of faith.

But was there a book in it?

Hard to say when I got my answer. Maybe it was when game developer Dan Burke told me that nearly everyone who made these games was atheist or agnostic. Maybe it was when game developer Roger Deforest told me about the nights he programmed music for Christian games and then went out with his boss and coworkers to a strip club. Maybe it was when I read the old Warp Zone interview in which interviewer Dave Allwein politely tells Wisdom Tree founder Dan Lawton, "Well I really appreciate talking to you. I really like [your] games a lot," and Lawton replies, "You can't be serious."

A voice, from deep within or deep without: You've found your book, Durham. I'd been hoping my big idea would be for a classic game with a rabid fanbase that would sell a couple thousand copies on the title alone, not an unlicensed curiosity shit-talked by its own creator. But as Noah understood: When the booming voice in your head gets you stuck on a crazy idea, the idea's craziness is itself much of the appeal.

So when friends asked me if I was every going to write one of these video game books myself, I started saying, "Yup! Bible Adventures."