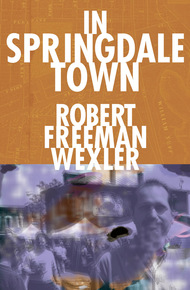 Robert Freeman Wexler's latest novel isThe Painting And The City, PS Publishing 2009. Hehas also published a novella, In Springdale Town (PS Publishing 2003 and reprinted in Best Short Novels 2004, SFBC, and in Modern Greats of Science Fiction, iBooks), a novel, Circus Of The Grand Design (Prime Books 2004), and a chapbook of short fiction, Psychological Methods To Sell Should Be Destroyed (Spilt Milk Press/Electric Velocipede 2008). His stories have appeared in various magazines and anthologies, including Polyphony, The Third Alternative, Electric Velocipede, and Lady Churchill's Rosebud Wristlet.He lives in Yellow Springs, Ohio with the writer Rebecca Kuder. You can find out more about his writing at www.robertfreemanwexler.com.

Reconciliation, longing, and ambiguity combine in one astounding locale: Springdale. Is it a mundane New England town on a picturesque river, or the nexus of the paradoxical?

Springdale appears to be a quiet village, unblemished by shopping mall or mega-store. The town sits in a fertile valley, surrounded by countryside rich in natural wonder. Summers, tourists attend the area's many arts and music festivals, and hikers crowd the trails. In the fall, reds and yellows of turning leaves decorate the landscape, and in winter, mountain resorts fill with avid skiers.

But some say Springdale exists only on the contoured highways of our collective imagination. Others point to references dating back to Colonial Boston, to multiple versions of a ballad telling a story of remorse and disgrace.

For two people, a lawyer named Patrick Travis and a television actor named Richard Shelling, Springdale is home and anti-home, a place of comfort and a distortion of everyday life. They are strangers to each other, yet connected. Their lives will intersect with a force that shatters both.

This edition includes a specially written afterword by the author.

Some fantastical fiction is right there in your face: elves, unicorns, wizards, quests that will forever change the world. But that's not always the case. Sometimes it sneaks up on you, drawing you in, painstakingly building up your understanding, playing to your assumptions and preconceptions. And then it blindsides you. We're talking about fiction where the world is Not As It First Appears. Once it's done that, you're in the trap, and all you can do is dig ever deeper into the strangeness – you have no choice. In Springdale Town is such a book, a beautiful, disturbing and wonderfully undermining construction. – Keith Brooke

Swells of oceanographic angst buffeted Shelling. A profusion of discolored velvety fur—pelts of beaver or raccoon—lined the street, softened his fall. Shelling had a beaver dam on his property, and he liked to sit near it, under the trees, losing himself in the sounds of his land. He planned to move a picnic table out there, though he worried it might disturb the animals. But why was he lying in the grass outside the library? Shelling jumped to his feet, and hurried down Main Street.

Half a block from the library, he stopped, unable to recall the source of his agitation. That's what happens when you miss your yoga class, he thought. He would have appreciated an explanation for the cancellation. With his unstructured life, disruptions like this left him dangling. If not for the discipline of yoga, his transition to life in this small town would have been difficult; the practice relaxed and invigorated him, opened him to new experiences. Living in the Los Angeles area for so long, he had grown contemptuous of other places in the country, of small towns, of any place lacking big-city sophistication.

As he walked, he glanced into the windows of several stores, seeing a clerk behind the counter in some, and in others, no one. Not just the yoga center then; the town appeared to be shorn of people, residents and visitors alike.

He entered Frisell's Coffee Roasters, pausing in the doorway, as had become his habit, to allow the fertile aroma of the roast to permeate his lungs. Two young women sat on stools behind the counter. They were laughing; as he drew near, he heard the one at the cash register mention elephants, or maybe cellophane. The other laughed harder, gasping, sucking air through the laughs. She hunched forward, cupping her reddening face with both hands. Silver rings decorated most of her fingers. Shelling recognized one with a raised zigzag design on a dark background, from the jewelry store across the street. He had spent parts of two afternoons there, trying on rings, assisted once by a bland-faced woman and the other time by a well-manicured bald man, neither of whom gave any indication of interest in talking to Shelling beyond the requirements of their job.

"What's so funny?" he asked. Neither woman responded. The young woman at the cash register asked the other to start a pot of decaf. Shelling ordered a cappuccino and waited while the ring woman prepared it. The cash register woman held out a hand for money. A tattoo of a dark bird, wings outstretched, decorated the underside of her wrist. Shelling wanted to join their discussion, but saw no way to breach the wall. He opened his mouth, preparing to tell the young woman that he admired her tattoo; instead, he carried his mug to a table and looked out the window at the empty sidewalk. The two women continued their conversation as though Shelling didn't exist.

"There's an archival method, Albania or someplace," one of them said. "They use numbered index cards to keep track of the tides."

"Are they suspended by fishing line, like in Greece?"