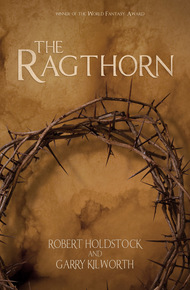 Robert Holdstock was born in Kent, where the marshes and woodlands were his childhood haunts. He had a Master's degree in Medical Zoology, and worked in medical research, before becoming a full-time writer in 1976. In 1984, he won the BSFA and World Fantasy Awards for Best Novel for Mythago Wood. It and the subsequent 'mythago' novels (including Lavondyss, which won the BSFA Award for Best Novel) cemented his reputation as the definitive portrayer of the wild wood. Celtic and Nordic mythology was also a consistent theme in his work including the 'Merlin Codex' trilogy (Celtika, The Iron Grail and The Broken Kings). Holdstock died in 2009, just four months after the publication of Avilion, the long-awaited and sadly final, return to Ryhope Wood (Mythago Wood).

Garry Kilworth is still writing half a century from his first published piece of writing, a short poem on a Chinese warrior. He lives in EastAnglia, but travels a great deal in the Far East. His latest publications are The Iron Wire, an historical novel set around the 1871 Adelaide to Darwin Telegraph Line, and The Fabulous Beast, a collection of horror, fantasy and science fiction tales, both published by Infinity Plus Books. In1992 he won the Children's Book Award with his fantasy novel The Electric Kid and 2008 the Charles Whiting Award for Literature with his historical war novel Rogue Officer.

The Ragthorn by Garry Kilworth and Robert Holdstock

"I am placing this entry at the beginning of my edited journal for reasons that will become apparent. Time is very short for me now, the final part of the ritual draws near...

I cannot pretend that I am not frightened."

There were these two British writers, one lived in the country, the other in the city. The country writer loved to visit the city and partake of brandy and Greek kebabs in the local hostelry. The city writer liked to visit the country and guzzle ale and barbecued steak under the apple trees. The two writers needed an excuse for these indulgences, and so they invented one, and this excuse was called "collaborating on a story" … It soon emerged that the story was to be about a legendary tree, which they both vaguely recalled from the tales their grandfathers used to tell them of mystery and myth. Soon they were delving with suppressed excitement into old documents at the British Museum and began to come up with some frightening discoveries.

The first of these finds was in studying the original text, in Anglo-Saxon, of the Old English poem "The Dream of the Rood". The marrying of the "tree" (crucifixion cross) and the "thorn" (a runic character) was too elaborately regular to be an accident of metre or alliterative language. Other discoveries followed, and the story gradually surfaced, like a dark secret from its burial mound.

The Ragthorn: a dark and unsettling World Fantasy Award-winning novella by Robert Holdstock and Garry Kilworth.

Also included in this volume, two bonus stories: "The Fabulous Beast" by Garry Kilworth, and "The Charisma Trees" by Robert Holdstock.

Rob Holdstock was co-editor of an anthology that published one of my very first stories. I first met him at the book launch, one of the most charming, warm and intelligent people I've ever encountered, and he went to great lengths to help me establish my writing career. He is also one of the finest fantasy authors we've ever seen. Around the same time I was reading every story by Garry Kilworth I could lay my hands on, even delaying the reading of them simply to prolong the pleasure – it's with good reason that New Scientist has described him as 'arguably the finest writer of short fiction today, in any genre'. Rob and Garry's World Fantasy Award-winning collaboration The Ragthorn captures the strengths of both authors, and appears here in its first ebook publication, exclusive to this bundle. – Keith Brooke

I am placing this entry at the beginning of my edited journal for reasons that will become apparent. Time is very short for me now, and there are matters that must be briefly explained. I am back at the cottage in Scarfell, the stone house in which I was born and which has always been at the centre of my life. I have been here for some years and am finally ready to do what must be done. Edward Pottifer is with me – good God-fearing man that he is – and it will be he who closes this journal and he alone who will decide upon its fate.

The moment is very close. I have acquired a set of dental pincers with which to perform the final part of the ritual. Pottifer has seen into my mouth – an experience that clearly disturbed him, no doubt because of its intimacy – and he knows which teeth to pull and which to leave. After the inspection he muttered that he is more used to pulling rose thorns from fingers than molars from jaws. He asked me if he might keep the teeth as souvenirs and I said he could, but he should look after them carefully.

I cannot pretend that I am not frightened. I have edited my life's journal severely. I have taken out all that does not relate forcefully to my discovery. Many journeys to foreign parts have gone, and many accounts of irrelevant discovery and strange encounters. Not even Pottifer will know where they are. I leave for immediate posterity only this bare account in Pottifer's creased and soil-engrimed hands.

Judge my work by this account, or judge my sanity. When this deed is done I shall be certain of one thing: that in whatever form I shall have become, I will be beyond judgement. I shall walk away, leaving all behind, and not look back.