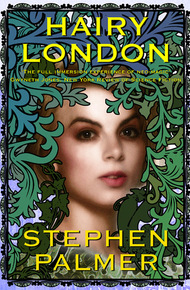 Stephen Palmer first appeared on the SF scene in 1996 with his Orbit Books debut Memory Seed, followed by its sequel Glass. There followed a number of novels from various publishers: Flowercrash, Muezzinland, the free festival Hallucinating and the gothic fantasy The Rat & The Serpent. In 2010 PS Publishing published his far-future novel Urbis Morpheos, described by one reviewer as "supremely odd yet deeply rewarding." In 2014 Infinity Plus Books published his surreal steampunk novel Hairy London, which is currently being adapted for audio book and podcast. His short stories have been published in various magazines and publications, notably with Solaris Books, Newcon Press, Infinity Plus Books, Eibonvale Press, and more. His work takes on green and environmental themes, often themes of social injustice, but there is also a vein of eccentric British humour in some of his work. His AI-based philosophical thriller Beautiful Intelligence is published by Infinity Plus Books in July 2015.

One evening at the Suicide Club three gentlemen discuss this age-old problem, and thus a wager is made. Dissolute fop Sheremy Pantomile, veteran philosopher Kornukope Wetherbee and down-on-his-luck Velvene Orchardtide all bet their fortunes on finding the answer amidst the dark alleys of a phantasmagorical Edwardian London.

But then, overnight, London Town is covered in hair. How the trio of adventurers cope with this unusual plague, and what conclusions they come to regarding love is the subject of this surreal and fast-paced novel.

Although not an out-and-out comedy, I actually laughed out loud at some of the puns and witty observations in this satirical and incisive romp when I edited it for its first publication at infinity plus. Hairy London takes the known and twists it into odd shapes, an alternate-London fantasy that paints an extraordinary backdrop to an adventure story that puts love and society under the microscope in a novel quite unlike anything else you will have read before. – Keith Brooke

There were so many horseless carriages outside the Suicide Club that Sheremy Pantomile found himself pushing between lampblack-stained running boards, so that to his horror his trousers became blemished below the knee. He clicked his fingers at the doorman and shouted, "Gentleman! Find me a passage between these smoking wrecks, or I'll have you cashiered."

Gentleman Smyth adjusted his turban, glanced this way and that, then descended to street level. "My apologies, sir. There is talk of one of our explorers returning from furthest Oriental reaches. It seems news has spr––"

"Just find me away in, fellow. Then find me new trousers. I take a thirty four inch waist."

Gentleman used his rear to nudge aside one of the horseless carriages, allowing Sheremy to squeeze through, then led him up the steps and inside the great marble edifice that was the hall of Bedwards House, Chancery Lane. Sheremy hurried into an ante-chamber, not wanting any of his peers to see his embarrassment. Gentleman followed. "I will go at once to the Trousery," the doorman said, "then return with a fresh garment. What colour, sir?"

Gentleman bowed. Sheremy waited, his annoyance fading as the sounds and smells of the Suicide Club calmed his mind. This was home. Here, he could be at peace, be free of the noise and stink of London; and here he could exercise his talents in the service of his fellow men. Damn, that Sikhish fellow was taking his time...

At last, as the Belladonna Clock struck nine, and then a few seconds later the great Tibetan dinner gong, Gentleman returned. Sheremy whipped off his trousers, adjusted his leather undergarment, then pulled on the clean trousers. "Excellent," he said, "though they smell of lavender."

"We use it to drive away moon moths," Gentleman explained.

"What's on the menu tonight?"

"A deviled tartar of yak, sir."

Sheremy departed, hurrying up the stairs that led to the dining room. Before entering it he checked his appearance in the mirror held upright by the statue of Turkman Hi retrieved from the ruins of Constantinople by Pharaday Lemmington. Aha... tall, dark eyed, black hair slicked down, a subtle moustache on his upper lip. No wonder the girls loved him.

He walked into the dining room and at once saw several of his associates seated at a pentagonal table; one chair free. He strode forward.

"Friends!" he said, allowing a servant to pull back the vacant seat.

"You are a minute late," said Velvene Orchardtide, examining a gold chronospiel that hung from his waistcoat spigot.

"An unpleasantness outside the building," Sheremy explained, "caused by news of some import – or so I believe."

Sheremy glanced at the other two diners: Sir Hoseley Fain, white-bearded Treasurer of the Suicide Club, and Lord Blackanore of Highgate, the Secretary. He enjoyed exalted company tonight. "Frankly," he said, lighting a cigaroon, "I'm getting rather tired of dear Lemmington's comings and goings. Can't we find a higher calling than shooting exotic animals and returning them to London?"

A few embarrassed titters rose from the table. Sir Hoseley sniffed, then said, "What did you have in mind, mon ami?"

"Oh... just something better, I suppose."

"Then you must think of something," said Velvene, glancing again at his chronospiel. "Where is that soup, eh? It is Arctic onion, and if they do not bring it in soon it will go warm."

"This place goes to hell if Pharaday's around," Sheremy muttered. "It's just not good enough."

Sir Hoseley shrugged, the ghost of a smirk on his face. "Complain to Juinefere," he said.

Sheremy scowled. All here knew of his feelings for Lady Bedwards, though he had done his utmost over the years to conceal them. Sir Hoseley was an impudent weasel. "Very good," he said. "Meanwhile, perhaps you should comb your beard before the birds start nesting in it."

As he cracked the surface of the soup and began cutting it up, Sheremy's mind turned to the situation he found himself in, which some might call unfortunate, though he termed it unjust. "You see," he explained, "I didn't know she was married. I swear I didn't know. How could I? She was just a freed slave, little more than a maid. Who'd have thought her husband would be so... well connected?"

"It seems you protest too much," Sir Hoseley observed.

Yes, they all knew the tales here. He hated that. When people discovered his failings, he hated it. He loathed being talked about. Pushing aside his empty bowl he said, "You all think you know me, don't you? You don't. Only a lover truly knows their lover."

There came laughs from the other four. "Well, we certainly all know you, Pantomile," said Velvene.

"Alas rather too well," Sir Hoseley added. "Tu me décois."

Sheremy felt his face flush. He had gone too far; spoken out of turn. "You are buffoons," he said.

"Rather a buffoon than a lovestruck bumpkin," said Sir Hoseley.

Sheremy felt his embarrassment turn to anger. "You've never married, have you?" he said, staring across the table. "Perhaps that is because you prefer the monocled post–"–"

"Enough!" Lord Blackanore cried. "Enough, please, all of you. We diminish ourselves with this horse banter."

Sheremy nodded at his associate. "Thank you," he said. "But you will admit it's true. Nobody here knows love. Mankind does not know love, it doesn't even have an explanation yet. We live in pandemonium because of that lack."

"Then you have your higher calling," Velvene said.

"My dear fellow," Sheremy said, "those long mornings you spend bathing have done something to your mind."

Velvene shrugged. "Explain it for us and you will both solve the inequities of your life and do mankind a service."

Sheremy felt he was being mocked by the urbane Orchardtide, whose family were well known eccentrics. "I won't humour you," he said.

Sheremy sat back. The deviled yak supper was approaching. "Then we'll have a wager," he declared, "all of us sitting here at this table. If, one season from today, one of us returns to the Suicide Club with an explanation of human love that mankind – from East to West – can accept, they will take the pot."