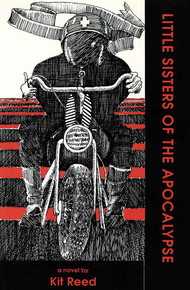 Born into a Navy family, Kit Reed moved so often as a kid that she never settled down in one place, and she doesn't know whether that's A Good Thing or not. It's a very good thing in its relationship to, WHERE, in which the entire population of a small island vanishes. Her fiction covers territory variously labeled speculative fiction/science fiction/literary fiction, with stops at stations in between that include horror, dystopian SF, psychothrillers and black comedy, making her "transgenred."

Recent novels are Son of Destruction and, from Tor, Enclave, The Baby Merchant and the ALA award-winning Thinner Than Thou. Her stories appear in venues ranging from Asimov's SF and The Magazine of Fantasy and Science Fiction to The Yale Review, The Kenyon Review and The Norton Anthology. Her newest collection is The Story Until Now: A Great Big Book of Stories, from the Wesleyan University Press. She was twice nominated for the Shirley Jackson Award and the Tiptree Award. A Guggenheim fellow, Reed is Resident Writer at Wesleyan University, and serves on the board of The Authors League Fund.

Little Sisters of the Apocalypse by Kit Reed

A motorcycle gang of nuns rides out on a mysterious rescue mission in this dazzling work of metaphysical fiction by Kit Reed. This scarifying trip into the near future provides an extraordinary look at women in the contemporary world. Marooned on Schell Isle in a pre-apocalyptic near future, the women are waiting. The men have all gone to war - the ultimate sexist act. When he comes back will he be welcomed? It's an open question. But today is the day everything begins to change.

What unknown force is rushing towards the island? What do the women have to fear? Is it the murderous Outlaw family, riding their way and bent on revenge, or the men, or an enemy within? But the bikers are coming: sixteen in all, in black helmets emblazoned with a silver cross, metaphysical infonauts who run computer programs in a ceaseless search for the name of God. They pray for the dead and when they have to, they ride out on their bikes to defend the living. Until they lift the face plates you will not know who they are. Watch out for them. The Little Sisters of the Apocalypse.

Of all the notes I've written on books in this bundle, this has been the hardest, with far too many false starts followed by deleting everything and starting again. As befits her 'transgenred' label, Kit Reed's work defies categorisation and tags. Little Sisters of the Apocalypse raises all kinds of questions about society, women's roles, and the political of the everyday, but above all, for me, it's one of the most moving stories I've read in a long time. And there are biker nuns. This is its first ebook publication, exclusive to this bundle. – Keith Brooke

And in a ruined city so remote from Schell Isle that Chag has never heard its name, sixteen bikers roll out of an underground garage and into the cold morning. Their black helmets are bisected by sleek crosses in silver. Warm breath mists the smoked face plates. The leader raises her gloved hand.

The sixteen dip their heads brieﬂy and cross themselves. In ordinary times the bikers dazzle with new software at the top of the Pearson Tower in the blasted city, but today they have business elsewhere. In ordinary times the women are brilliant hackers, who market technology to support their mission to the homeless. They pray together four times a day and when circumstances permit, they meditate. In gentler times they would have been contemplatives.

But in this continuum the savage world demands more. When people are starving you can't just turn your backs and pray for them. Right now life is uncertain and time is short. There's too much to be done here.

The women pursue their God at lightspeed. Brilliant, driven, the bikers devise computer programs in an attempt to address the Almighty. Like divers they are poised for the ultimate leap. Let the computer vault everything that's gone before, leapfrogging millennia of prayer and effort; let the analog mind pursue possibilities at speeds it's impossible to comprehend; let it take them to the new jumping-off point. Then let it begin. For the gifted ones, who come closest to pure contemplation, time spent any other way is a necessary sacriﬁce. Love-struck and drawn, the women yearn only for the Presence, but even among themselves these bikers will not acknowledge which of them has come close, for fear God may hear them trying to describe what has been given and take it away.

They raise their own vegetables in the city park behind their ofﬁce block. They celebrate the Sacrament of the Eucharist with the occasional transient priest; they try to do God's will and they try not to resent the male hierarchy that tells them they are only women, and therefore not ﬁt to be His priests.

They pray for the dead and when they have to, they ride out on their bikes to defend the living.

Their legend precedes them: crimes interrupted by the mysterious riders; lives saved at the last minute by bikers roaring to the rescue, robberies thwarted, murderers stopped; children rescued from ﬂoods or snatched from under the wheels of runaway cars at the last possible minute; householders saved from foreclosure by an astonishing gift of money; evildoers foiled and the helpless— helped. Picked up from the gutter and handed new lives, the blessed run to the door—too late—in an attempt to say thank you.

Before they can be identiﬁed, the mystery riders are on their bikes and gone, whisked away with a roar, disappearing in a cloud of oily exhaust.

Householders stand in the doorway, bafﬂed. Who was that ... What do we have to reckon with?

Riding with black scarves streaming, the bikers do not advertise. Surprise gives them the advantage. Mystery makes them powerful; they give their lives to it. Pressed to name the source of their strength, they can only partially explain, although they've spent a lifetime trying to comprehend it.

They are riding out for a reason, and if only the leader knows what it is and she only imperfectly, no matter.

It's enough to know something needs doing.

So it is over the lakebed that the motorcycles will come, pulverizing the cracked earth and raising a terrible dust. They will come in a roar of souped-up engines and a cloud like an approaching sandstorm. Until they thud to a halt in a tight half-circle and the whirlwind stills, you will not be able to see the riders clearly, and this is the way they want it. Until they lift the face plates you will not know who they are. Even then the riders' features will be obscured, frosted with desert sand, so that until their leader speaks you will not know her, and the lettering on the helmets? Not yet clear.