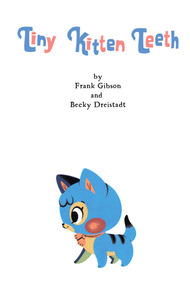 Becky and Frank have been making fun comics together for years and years! Known for their comic Capture Creatures and their children's book Tigerbuttah, Becky and Frank also work on Natasha Allegri's animated series Bee & Puppycat. Not often apart, separately Becky is known for her work as a designer on Disney's Star vs The Forces Evil and her posters for Mondo. During his alone time, Frank is also known for writing the comic The Amazing World of Gumball for Boom! Studios.

Tiny Kitten Teeth is a hand-painted graphic novel following the adventures of a fish-out-of-water cat in a fancy college town. One hundred percent hand-painted traditionally in gouache, Tiny Kitten Teeth is carried by a joyful tone reminiscent of a PG Wodehouse novel as it shifts through multiple art-styles ranging from French style comic albums to retro Tiki.

It's not often in a clever satire that you want to hug and squeeze every character while screaming "Awww!" – The Devastator