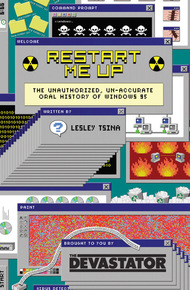 Lesley Tsina is a writer and actor from Palo Alto, CA. She performs at the Upright Citizens Brigade Theater in Los Angeles, tours as a solo performer with her show "Lord of the Files," and is a Contributing Editor for The Devastator.

Restart Me Up by Lesley Tsina

Celebrate the 20th anniversary of the greatest technological achievement known to mankind: Windows 95. (With all due respect, the telephone and nuclear fission can suck it.) This is the untold, unbelievable, largely untrue story of the creation of Windows 95.

Go behind the Blue Screen of Death to meet those who made it all possible: the Microsoft programmers who became addicted to snorting Pixy Stix, the marketers who employed mass hypnosis tactics to trick the press, the software testers who battled a literal giant bug in the code, the visionary director of the Windows 95 Cyber-Sitcom Instructional Video and "Mighty God" Bill Gates, who went up against Mick Jagger in a money-suitcase standoff over the rights to "Start Me Up." It's the story of how a tiny operating system patch became an international media phenomenon.

If you remember when all computers legally had to be beige, and every page on the internet was "Under Construction," this hilariously fake oral history is a must Read.exe. – The Devastator

Where Did You Want to Go That Day?

Every schoolchild knows that August 24th, 1995 was the launch of Windows 95. We began our journey by asking every single person in line at the Redmond, Washington Starbucks where they were on 8/24.

It was an ordinary day. I made breakfast, fed the cat, drove to work. I was just pulling into the parking lot when they mentioned it on the radio. And I took the rest of the day off.

I was tired. I'd been up all night waiting for the stroke of midnight, counting and recounting the change in my piggy bank to make sure I had $89. Between my birthday money, my salary from Baskin Robbins, and my allowance, I had just enough. It was like Christmas, only I was buying myself the best present in the world: a consumer- oriented upgrade to the Windows 3.1 operating system. I biked down to the store right after school.

I remember my dad came home that night with a package under his arm, and we all gathered around. And he said, "This is going to change our lives."

I was flying home from Paris on business, and I saw the Microsoft logo on the fields of Southern France. They must have painted it. I was so jazzed, I bought it at the airport when I landed.

I was doing really badly in school. Getting into fights, vandalism, stuff like that. Then, my math teacher took us to the movie theater to watch a satellite broadcast of the launch. I was overwhelmed by the sheer glamour of it. And I decided to become a software engineer.

It was all over the news. I opened the paper and there was a full page spread. It was everywhere.

When I got it home I just stared at the box before I even opened it. That night, I slept with the manual on my pillow. My girlfriend had just left me.

I was working at Apple. We were like, nice try, assholes.

My girlfriend and I were sophomores at Reed, and we drove up from Portland to try and sneak into the launch party. We got a guy downtown to make us fake Microsoft IDs. We were crazy!

I slept through it because I'd been up watching episodes of Voyager on VHS. I felt like such an asshole because the Brian Eno message board was blowing up when I logged on.

We all woke up that morning and thought, this is it. It's all on the line. We succeed, or we crash and burn. But even so, we'd been in a bubble for 18 months. We had no idea how big this thing was going to be. We put on our polos and Dockers and vanpooled to campus. I cannot adequately describe the level of tension and expectation. To really know what the stakes were, you had to have been on the project. It's a hell of a story. How much time do you have?