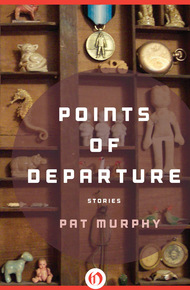 Pat Murphy has won numerous awards for her thoughtful, literary science fiction and fantasy writing, including two Nebula Awards, the Philip K. Dick Award, the World Fantasy Award, the Seiun Award, and the Theodore Sturgeon Memorial Award. She has published seven novels and many short stories for adults. In 1991, Pat co-founded the James Tiptree, Jr. Award, an annual literary prize for science fiction or fantasy that expands or explores our understanding of gender roles. This award harnesses the power of chocolate chip cookies in an on-going effort to change the world. Pat is a known troublemaker. Her favorite color is ultraviolet.

Points of Departure by Pat Murphy

For Pat Murphy, the process of writing is a journey to somewhere very different. Her stories are the messages she sends back.

Points of Departure collects the most memorable of Murphy's tales. These stories explore the shifting boundaries between the real and the imaginary, blending visionary storytelling with uncompromising realism. A chimpanzee with the memories of a teenage girl must find her way in a hostile world. An alien visitor seeks refuge among the Mayan people of the Yucatan penninsula. A woman comes to terms with a spirit that invades her apartment. A young man, following in his dead father's footsteps by venturing alone into the Himalayan wilderness, makes an unexpected discovery. In Murphy's worlds, the supernatural is just a few steps away – in the static of an old movie on TV, on an abandoned subway platform, in a cluttered room where an alien spaceship is under construction.

As children, we all knew that there were monsters under the bed, fairies in the garden, and fantastic creatures everywhere, just out of sight. With these stories, Murphy opens the secret doorway, letting beings enter our world and allowing us to visit theirs.

I've run into Pat Murphy over the years at parties and conventions since she lives in the San Francisco Bay Area, and so do I. Points of Departure is a story collection, including Pat's Nebula-winning "Rachel in Love." She also won a Nebula for her novel, The Falling Woman. She is renowned for her stories, which are elegant, thought-provoking, and compassionate. I'm delighted to include this fine collection in the Philip K. Dick Award Bundle. – Lisa Mason

Excerpt from Rachel in Love, included in Points of Departure

It is a Sunday morning in summer and a small brown chimpanzee named Rachel sits on the living room floor of a remote ranch house on the edge of the Painted Desert. She is watching a Tarzan movie on television. Her hairy arms are wrapped around her knees and she rocks back and forth with suppressed excitement. She knows that her father would say that she's too old for such childish amusements—but since Aaron is still sleeping, he can't chastise her.

On the television, Tarzan has been trapped in a bamboo cage by a band of wicked Pygmies. Rachel is afraid that he won't escape in time to save Jane from the ivory smugglers who hold her captive. The movie cuts to Jane, who is tied up in the back of a Jeep, and Rachel whimpers softly to herself. She knows better than to howl: she peeked into her father's bedroom earlier, and he was still in bed. Aaron doesn't like her to howl when he is sleeping.

When the movie breaks for a commercial, Rachel goes to her father's room. She is ready for breakfast and she wants him to get up. She tiptoes to the bed to see if he is awake.

His eyes are open and he is staring at nothing. His face is pale and his lips are a purplish color. Dr. Aaron Jacobs, the man Rachel calls father, is not asleep. He is dead, having died in the night of a heart attack.

When Rachel shakes him, his head rocks back and forth in time with her shaking, but his eyes do not blink and he does not breathe. She places his hand on her head, nudging him so that he will waken and stroke her. He does not move. When she leans toward him, his hand falls limply to dangle over the edge of the bed.

In the breeze from the open bedroom window, the fine wisps of grey hair that he had carefully combed over his bald spot each morning shift and flutter, exposing the naked scalp. In the other room, elephants trumpet as they stampede across the jungle to rescue Tarzan. Rachel whimpers softly, but her father does not move.

Rachel backs away from her father's body. In the living room, Tarzan is swinging across the jungle on vines, going to save Jane. Rachel ignores the television. She prowls through the house as if searching for comfort—stepping into her own small bedroom, wandering through her father's laboratory. From the cages that line the walls, white rats stare at her with hot red eyes. A rabbit hops across its cage, making a series of slow dull thumps, like a feather pillow tumbling down a flight of stairs.

She thinks that perhaps she made a mistake. Perhaps her father is just sleeping. She returns to the bedroom, but nothing has changed. Her father lies open-eyed on the bed. For a long time, she huddles beside his body, clinging to his hand.

He is the only person she has ever known. He is her father, her teacher, her friend. She cannot leave him alone.