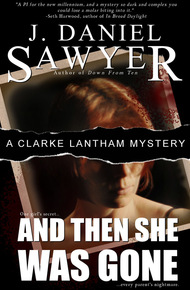 A longtime award-nominated audio/video producer and tech journalist-turned-novelist, J. Daniel Sawyer's abusive behavior toward the English language finally landed him in trouble with the release of his hard-boiled Clarke Lantham Mysteries. When not speculating about crime and punishment, or laying out twisted visions in his sci-fi thriller series The Kabrakan Ascendency or his cabin fever comedy Down From Ten, he bends his mind toward corrupting his fellow authors with educational books like Throwing Lead: A Writer's Guide to Firearms (and the People Who Use Them) and Making Tracks: A Writer's Guide to Audiobooks (and How To Produce Them).

On the rare occasion that he escapes his cavernous studio to see the light of day, he slips away into the wilds of the San Francisco back country where he devotes his energies to running afoul of local traffic ordinances in his never-ending pursuit of the ultimate driving road.

Sign up here for the author's newsletter, and get a free story with your subscription. For contact info, podcasts, and more, visit his home page at http://www.jdsawyer.net

And Then She Was Gone by J. Daniel Sawyer

72 hours. The cops only look for missing adults after 72 hours.

Following a scant few traces from her past, Lantham dives headlong into a dark hole filled with biotech labs, activists, kink clubs, cyberpunks, and mercenaries.

But from the moment he sets foot in Nya's world, Lantham's race against time turns into a run for his life. Blocked at all corners, framed for murder, and stalked by a shadowy figure willing to kill to keep Lantham from finding out who kidnapped Nya Thales, and why.

J. Daniel Sawyer has the most amazing voice of any writer I've ever encountered. It makes sense, since he started writing for audio and writing for the ear is all about voice. His most popular series, featuring ex-cop Clarke Lantham, focuses on his other specialty—computers and technology. Dan used to work in the tech industry when he lived in the Bay Area, and his expertise comes through in every sentence. He's added the first book of that series to this bundle, and believe me, you'll want to read every single one of the others. – Kristine Kathryn Rusch

My first stop on my hopscotch jaunt to hell was a lovely cookie-cutter home in Danville, one of those places that also-ran second generation Bobos bought because they couldn't afford to live behind the fences and armed guards in Blackhawk proper. Hard wind blew over the Oakland hills and swept up to blast me with little bits of cow dung from the neighboring field—bet you didn't know that having a house that backs up to pasture is the ultimate in posh.

Jason Rawles answered the door after I leaned on the bell a couple times.

"Yeah?" It was clear from the way he stood shirtless in the midday light, scratching his butt and looking at me through half-lids, that he thought he was far too sexy for the house that fortune had confined him to.

"Really?" He appeared to pull the business end of his scratching fist out of his butt crack and shove it into his mouth. It was only after his hand started smoking that I realized he'd been palming a joint.

He looked me up and down through the smoke like he was surprised they hadn't just gone ahead and buried me when I hit thirty. "Who the hell are you?"

"Nya? Yeah, sure, whatever." He waved me in, then seemed to forget I was there. I followed him into the kitchen where he ducked into the fridge and grabbed himself a can of the alcoholic seltzer water that kids his age think qualifies as "beer." He didn't offer me one, a favor which made me like him more than I really wanted to.

He batted the fridge door closed, planted his back against it, and sucked the sludge out of the can. Once he'd finished chugging it he slammed it against his head and tossed the aluminum hockey puck at a box on the counter. It missed and went skittering across the green granite and then down onto the charcoal slate floor tiles.

The kid flicked a Zippo open and took another pull on the joint, then wheezed "So what's the big mystery?" at me.

"If Dora hired you," the scorn of a moron has that special ring to it that always makes my heart sing, "Shit. Dora wouldn't have gotten you to go around looking if she didn't think there was a serial killer on the loose."

"Shit yeah," the kid leaned forward and tapped the ash off the end of his joint into a neglected coffee mug, "there was this one day we all went up to Chico to go rafting, Nya dropped her phone in. When we got home—and we were on time to the minute—Dora was shitting bricks like she was born on a building site. Crazy bitch. Could hear her screaming at Nya halfway down the block."

"I see." I hadn't banked on home troubles factoring into this, but it did lay a motive for running away. Assuming Nya was competent to run away. Mrs. Thales seemed to think she wasn't, but what overprotective mother does? "When was this?"

"Who all was there?"

He shook his head and looked up at the ceiling. "What, man, you wanna see pictures or something?"

He shrugged, jerked his head at the staircase in the foyer, then shuffled off after it, rolling his eyes like he couldn't imagine a dumber series of questions. That was fine. So long as he thought I was dense, he'd keep dancing—it made him feel superior, and Rawles was the sort who needed to feel superior.

It turned out that, despite the arrogance and the too-many-gym-hours physique, Rawles was the kind of kid who thought that the sun rose and set.

In his room I caught a glimpse of his report card on his bedside table, and the failing grade in Astronomy headlined the show. The supporting cast didn't look much better.

He plopped his ass in front of this year's latest-and-greatest fruity computer hardware—the smoke followed him around like something out of a cartoon—and jiggled his hand in the direction of an ottoman. I pulled it up and planted my carcass on it as he started shuffling through pictures.

"Don't know what you want to see," he shuffled past the obligatory shots of the delta landscape out the window, cataloging gas stations, teenagers goofing off in the back seat of the Suburban, and flashing the oncoming traffic. "We just drove up and went rafting."

"Who are the others?" When I asked, he stopped scrolling through the pics and pulled up a group shot.

"Wha? Nah. Think his real name is…Chuck? Graduated Cal High a few years back, goes to Diablo Valley. Kind of a prick, but we let him pack along anyway."

His brow wrinkled quickly with contempt, then he took another hit on his joint and leaned back in his swivel seat. "Yeah, a cock." He twisted his neck around to me and blew the smoke in my face. "You know what a cock is, right?"

"That would be the thing your girlfriend puts the batteries in after you go home, eh, kid?"

The skin around his nose crawled up to his eyebrows like a cow just farted in his face. The joint snaked its way up to his mouth again, and he tried to hit it. His lungs had different ideas, and he hacked himself into a laughing fit.

I tipped my head, let him think he was winning. "So, prick?"

"Oh, you know." Rawles lowered his voice to a fratboy-chump timbre, "'I'm Gravity, the irresistible force.' Just a prick. I mean, look at him."

He jerked his head back to the face on the screen.

Mr. Gravity wore the dreads of a rich white kid who spent too much time trying to get laid at anti-globalization rallies. He was also completely baked, each hand full of one tit from a girl on each arm, enjoying the blessings of being the age between expectations and responsibility.

Nya I recognized from the school portrait Mrs. Thales showed me—medium tall, broad shoulders, reddish darkish hair, exotic face that looked like it had been Photoshop-smoothed, a few acne scars here and there. In the high school senior photo she'd worn a traditional formal dress, but in this photo she was considerably more…relaxed. She came up to maybe Gravity's shoulder, which put him comfortably north of six feet with hands big enough to palm something the size of a casaba.

Not exactly the well-behaved pack of church kids that Mrs. Thales might prefer to imagine when she thought about her daughter's friends. Then again, idolizing a needy child was one of the expected vices of motherhood.

"Yeah, looks like a prick. Who's that?" I pointed to the stout-looking girl in Mr. Gravity's left hand.

"And that's Nya there?" I pointed to the more familiar girl with the great shape and squinty grin in Gravity's right hand.

"What can you tell me about her?"

"Well, if I'm going to find her I need to know everything I can about her."

"Oh. Well, umm…she doesn't really have any hobbies. Gets nervous around new people, at least more than one at a time. Let me tell you, though, since she was eleven…"

Rawles rattled off a story that left me vaguely queasy at that point, but it erased any doubts about how qualified he was to pull an A in anatomy or biology if he could be bothered to stop toking long enough to read the homework. He'd evidently known her since Elementary school, and when she bloomed he was in the right position to catch her as she fell on her back.

She was one of four girls at the school that got around like that, something Rawles seemed to laugh about only because he was embarrassed at how slavishly he followed them around. Or did he lead them around?

Full of hot air and bullshit though he was, I had a hard time discounting all of it when his room was plastered with posters and cluttered with keepsakes. Paris? Costa Rica? Yeah, they'd been there. On Rawles's dime, usually.

"But Nya. Man, she looks at you and there's just this…thing about her. And she always knows what people are thinking, even strangers, like she can smell it. I mean, they're all kinda like that, but she's better at it than the rest of 'em. It's fuckin' creepy. She settled down a little when Gravity came around." The young Mr. Rawles said the name like somebody had added dingle-berries instead of strawberries to his breakfast cereal.

Somebody wasn't happy with the pecking order.

"If he's such a prick, why keep him around?"

Rawles snorted. "You try telling Nya to stay away from someone and ask that again. Bitch has an iron fist. You gonna be all day? I gotta go get the dog from the barber."