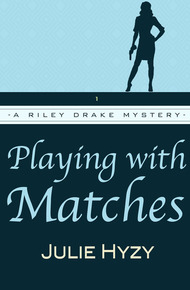 Playing With Matches by Julie Hyzy

Tough and tenacious, Riley Drake is a first-class private eye who runs background checks for a dating service on the side. She has zero interest in helping billionaire John Stratton clear his name so the man can resume dating again. The handsome widower would be quite the catch—if it weren't for the fact that he probably murdered his wife.

Stratton's woes are only part of Riley's problems. Other clients—a TV celebrity with sexual-perception issues, a Trump-like entrepreneur with an embarrassing fetish, and a worshipful drug-addict trying to go straight—keep her running through the streets of Chicago, ready to take down anyone who gets in her way.

Riley is determined to uncover all their secrets, even though she knows that playing with matches means you sometimes get burned.

New York Times bestselling writer Julie Hyzy is best known for her cozy mysteries, but she writes darker crime stories as well. Originally hidden under a pen name, Playing With Matches bears Julie's bestselling award-winning name for the first time. Like David D. Lee, and Melissa Yi, Julie first came to my attention before she had ever published a word. Her writing was good then; it's spectacular now.

I'm hoping Playing With Matches marks the first book in the Riley Drake series. At the moment, the novel stands alone and will, I hope, lead you to Julie's other marvelous work. – Kristine Kathryn Rusch

The problem with being a private dick was that I didn't have one.

In fact, when I first announced my career aspirations, my foster mother, Mae, fixed me with a squint. "Shee-it, Riley," she'd said, "that's no way for a respectable woman to earn a living."

I'd almost countered with, "How would you know anything about respectable women?" but for once I'd held my tongue.

That was before I joined PS Consultants. Since then, despite the constant battles I faced convincing potential clients that I could be just as effective as a steroid-laced bruiser, I'd never regretted my decision to become a private eye in the Windy City. But if I had known what was in store for me with John Stratton's case, I might have taken Mae's advice to get myself pregnant and married—in that order.

Running late on a June morning, I stood inside an elevator at Prudential Plaza, jamming my thumb against the button to force the doors to close faster. Just as they began to move, a hand slammed against the elevator's rubber safety switch, causing the doors to retract.

Two seconds later, the owner of the hand loped in. He gave me the once-over. I gave one right back. Five-ten, a buck and a half, tops, the guy had a bad complexion, pinpoint pupils and a full-body twitch.

Before he could blink again, the elevator eased shut.

The guy slid down the left wall and squatted in the corner. His words were slurred when he said, "You got nice legs."

As we started up, the tang of body odor and day-old booze made the small area suddenly too close. This guy had made it past security, which meant he had business in the building. I had a feeling I knew where he was headed. My fingers hovered over the buttons. "What floor?" I asked again.

"Whatever floor you pick, baby."

Beer balls at eight in the morning. Great.