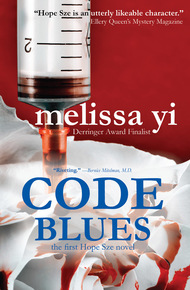 Melissa Yi (melissayuaninnes.com/) is an emergency physician and award-winning writer. Publishers Weekly hailed the Hope Sze series as "entertaining and insightful," while Ellery Queen's Mystery Magazine admired her "nitty-gritty" and "sprightly style." Canada's national book show, CBC Radio's The Next Chapter, selected the fourth Hope Sze novel, Stockholm Syndrome, as one of the best crime novels of the season. Yi was shortlisted for the Derringer Award for best short mystery fiction. In her spare time, she chases after two small children and one large Rottweiler.

Then she discovers a doctor's body in the locker room.

When she tries to uncover his killer, two men dive in to help her.

The one man with charm to burn, the one man who makes her melt, has zero alibi.

Code Blues. Because medicine can be murder.

Written by an emergency physician trained in the crumbling corridors of Montreal, Canada.

When I first met Melissa Yi, she was a resident emergency room physician with dreams of becoming a professional writer. Her writing, including her award-winning short fiction, has always had power, but she has truly found her niche with the Hope Sze mystery series. Drawing on her personal experiences in the ER in Canada, Melissa has created medical thrillers that shine with authenticity and are impossible to put down.

Another first book in a series (like others in this bundle), Code Blues provides the perfect introduction to a world we often experience, but rarely understand. – Kristine Kathryn Rusch

I pictured the city of Montreal as a woman with bleached blonde hair and a generous, lopsided bosom, who would draw me into her perfumed embrace and whisper, "Bienvenue." Instead, I found a skinny brunette with a cigarette jammed in the corner of her mouth who turned around and bitch-slapped me.

At least, that's what it felt like. Even before I got mixed up with murder.

At 7:25 a.m., I stepped through the ER's automatic doors on the east side of the hospital, near the bike racks. I promptly spotted ten people on lime-green plastic chairs, dozing or watching the TV in the waiting room on my right.

Ten people already, on my first day of residency, also known as my first official day as Dr. Hope Sze. Happy Canada Day to me.

Dr. Dupuis handed me a chart for a seventy-five-year-old woman with abdominal pain. "Have fun."

I drew the dirty pink curtain around bed number 11 before I began the interview. The patient's son helped swish it around his side of the stretcher. My patient turned out to be a tiny, white-haired, half-deaf woman who only spoke Spanish. Her family spoke a little French, but not much. I found myself yelling and playacting a lot. "Do you feel nauseous? Are you vomiting?" Grab stomach, pretend to retch. "Do you have pain in your chest?" Hands to heart, with tormented eyes raised to the acoustic tile ceiling, like I was Saint Hope at the stake. "Do you have diarrhea?" That one was hard. I made shooing motions around my rear end. Even the patient laughed.

During the physical exam, my hands traversed all over her abdomen, while I asked if it hurt. "Dolor? Dolor?"

The family enjoyed this demonstration of fifty percent of my Spanish vocabulary (the other word I knew was si, or yes) and praised my excellent command of the language. "Très bien!" The patient beamed at me. She didn't look too pained. I was in the middle of asking her to turn over for a rectal exam when I heard a flat woman's voice from the speakers overhead, "CODE. BLUE. OPERATING ROOM."

We flew around the nursing station and past the X-ray light boxes. He slammed the side door open with the heel of his hand. We dashed down the narrow back hallway.

He punched open another teal door. As we sprinted up two flights of stairs, one of my black leather clogs almost went airborne. I jammed my foot back into it. Dr. Dupuis ended up a half-flight ahead of me, but I caught up to him on the landing.

We dashed left, and then another left past the elevators, and then we were at the T junction of a hallway and Dr. Dupuis was yelling, "Where is it?" at a guy in a white uniform and a blue bonnet-cap.

Dr. Dupuis doubled-back a few steps and shoved open the door to a small, jaundice-yellow room.

The door nearly swung shut again. I thrust it open.

Beige lockers lined the four yellow walls and made a row down the middle of the room. A wooden bench stretched lengthwise in each half-room.

In the far half, wedged between the bench and the lockers, I spotted a pair of men's leather shoes. The feet sprawled away from each other. The scuffed gray soles of the shoes pointed toward me.

Dr. Dupuis crouched at the man's head, blocking my view of the top, but someone had yanked the man's charcoal T-shirt up to his armpits, exposing his white belly and chest, above his brown leather belt and khaki pants.

A black woman in a white coat pressed her fingers against the side of the man's throat. "There's no pulse."

"I'll start CPR!" I yelled, running toward them. I'd only ever seen one code blue, on a sick patient in the emergency room who didn't make it. I'd never heard of a code in a men's room. We didn't even have gloves. Mouth-to-mouth wasn't my first choice.

I knelt on the cold tile floor, my arms extended, hands laced, and braced to do CPR. Then I finally saw the man's face.

His features were mottled purple, his filmy eyes fixed half-open, his jaw hanging open under his moustache.

I knew this man. Or at least, I used to.