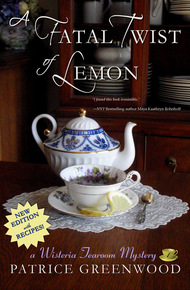 Patrice Greenwood was born and raised in New Mexico, and remembers when dusty dogs rolled in the Santa Fe plaza. She has been writing fiction for over twenty years (no, not just these books – she's not the fastest writer around, but she's not that slow).

She loves afternoon tea, old buildings, gourmet tailgating at the opera, and solving puzzles. Her popular Wisteria Tearoom Mysteries are informed by many of these interests. She is presently collapsed on her chaise longue, planning the next book in the series.

A Fatal Twist of Lemon by Patrice Greenwood

They don't belong in Ellen Rosings's Victorian tearoom. But when her opening day thank-you tea ends in the murder of the president of the Santa Fe Preservation Trust, the police invade her haven. Enter Detective Tony Aragon: attractive and unsympathetic, with a chip on his shoulder that goes beyond the murder investigation, and Ellen's delicate bone china cup is full. Is the murderer one of her honored guests, or the ghost rumored to haunt the building? Will Ellen solve the mystery, or will the Wisteria Tearoom's premiere turn out to be its—and Ellen's—finale?

This cozy mystery is the first in the Wisteria Tearoom Mysteries series.

There are a lot of mean streets in this bundle, dark stories and creepy villains. Patrice Greenwood provides a respite from all of that. Her Wisteria Tea Room falls into a subgenre that I often find twee—the cozy. Yet Patrice writes a mean cozy, the kind I absolutely love. And I mean "mean" in the best possible way.

Under another name, Patrice is an award-winning western and historical writer. You can see those influences here. She's also from New Mexico, where this book is set, adding yet another layer of authenticity to A Fatal Twist of Lemon, the first book in this marvelous series. – Kristine Kathryn Rusch

The first day my tearoom opened was wonderful—mostly. Funny how life can go swimmingly one moment, and fall to pieces the next.

The sun was starting to dip toward the west, filtered by the wisteria vines on the front porch, as I bade my guests farewell. My thank-you tea party had been a success, and the butterflies in my stomach had mostly settled down. After months of hard work, the Wisteria Tearoom was ready for its official grand opening celebration in two days.

"The tea was marvelous, Ellen! Come for dinner tomorrow," said my aunt Nat, giving me a big hug.

I waved farewell to her and her perennial beau Manny Salazar, whose produce business was one of my suppliers. With a grateful sigh, I went inside and started toward the kitchen.

Claudia Pearson—a tall, older woman with snowy hair drawn into a tight bun and an aristocratic Roman nose, who always reminded me of Georgia O'Keeffe—stood in the hall putting on her gloves. She and Sylvia Carruthers, both from the Santa Fe Preservation Trust, were my most important guests at the thank-you tea. In fact, I'd come up with the party as a way of acknowledging them. Without their help, I wouldn't have been able to open the tearoom.

"Did Mrs. Carruthers go already?" I asked Claudia, who seemed in no hurry to leave.

We both looked toward the private dining parlor at the back of the tearoom, which doubled as a conference room and was where the tea had taken place. Vi, one of my servers, a stunning Juno of a girl with a tumble of flaming curls barely confined by a lavender ribbon, stepped out of the pantry across the hall, carrying an empty tray.

"Maybe she forgot something," I said to Claudia. "I'll go and see."

I went to the dining parlor door with Vi close on my heels. Dusk gathered at the windows and French doors, pushed back by the golden pool of light from the chandelier. I stopped short just inside the doorway.

Sylvia Carruthers lay sprawled on the floor beside the table, her huge heishi necklace tight around her throat, eyes bulging and her face a livid purple.