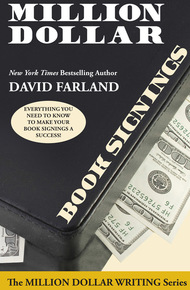 Million Dollar Book Signings will tell you everything you need to know to make your signings a success. This insightful book includes:

Whether you're a new author or a seasoned one, throw a book signing that makes readers leave wanting more—more books, more of you, and, more signings.

David Farland has made quite a name for himself by helping and instructing the next generation(s) of writers. He gives many workshops, is the coordinating judge and one of the lead instructors for Writers of the Future, and he's one of the founders of the Superstars Writing Seminars. If you aren't reading his Daily Kick in the Pants, you are missing a regular infusion of advice and inspiration. Thanks to Dave, WordFire Press launched our Million Dollar Writing Series of books, topical no-nonsense advice on specific subjects. After you've written and published your book, how do you get people to buy it? His Million Dollar Book Signings gives authors excellent advice on how to meet customers face to face. And since he broke the Guinness World Record for "largest single-author book signing" (in fact, he broke the record that I set!), he knows what he's talking about. – Kevin J. Anderson

Years ago, a new author, Ken Rand, did his first book signings in some mall stores. Shortly afterward, he brought me a gift: a neat little box labeled "Book Signing Kit."

The kit contained four items: a pen, a rubber nose, a party horn, and a box of Kleenex.

The pen of course was for autographing books.

The rubber nose was for those lonely moments when no one in the store would even talk to you, and you just wanted to hide.

The party horn was for those times when someone asked, "What's your book about?" and you desperately needed to toot your own horn.

The Kleenex was for those odd moments before, during, and after the signing when you just wanted to cry from embarrassment.

I've given some signings where I could have used everything in the kit. In fact, I've given far too many of those signings. I've had signings where the bookstore managers forgot I was ever coming, or when it was storming so badly, no one could make it.

But I've also had some great signings, where readers literally lined up out the doors and around the block. Indeed, on July 3, 1999 I set the Guinness record for the World's Largest Single-Author, Single Book Signing—a record that I held for more than 13 years.

So this guide is dedicated to every author who wants to throw away their old "Book Signing Kit" and figure out how to really sell more books!

In fact, I'm going to recommend some new items for your book-signing kit, things that you're going to need to take with you to every signing.

But first, a word of warning: you need to put some of the strategies found in this book into effect at least six months before you ever do a signing. Great signings don't happen by accident. As the ancient Chinese general Sun Tzu pointed out, "Victory goes to the general who wins first with strategy and then goes to war, while destined for defeat, rush to war first and then struggle in vain to win."

The purpose of a book signing is to build audience awareness of you and your products. Most signings fail to accomplish much in that regard. They are poorly planned, possibly ill- scheduled, and are badly executed.

As a result, an author who invests his time and money in traveling to and from failed book-signings will recognize that it is a loss.

Most publishers feel the same, so they will often try to discourage new authors from doing book-signings. They'll say, "Spend your time writing your next book. It's time a better investment."

Most publishers have a publicity department that could be of great help to a new author, but the publicists almost always work exclusively to promote the firm's top bestsellers. So, authors like J.K. Rowling or Danielle Steel get invited to huge events, while new authors just get discouraged.

In fact, most publishers will even have a corporate policy that says, "We only do book-signing tours for authors who are selling more than 300,000 copies in hardcover."

Of course, that puts you as an author into a catch 22. How are you going to sell those kinds of numbers if your publisher isn't promoting you?

Let me tell you a secret. Most publishers do a terrible job of promoting your books. Their publicists may not even know how to plan and execute a spectacular signing.

In today's world of publishing, where so many authors are going indie, every author needs to learn to promote their own works. This little book will show you how to plan and execute your own tour. Don't worry. It isn't hard to do.

Stop thinking small. For example if your signing takes place within the first week of the book's release, instead of saying that you will have a signing, advertise that this will be a "Major Book Release Party" and that you will be signing numbered editions of your book. This will help draw in collectors, people who often buy in bulk as a way of investing money.

My friend and student Brandon Sanderson did this with his first novel, signing in a tiny Waldenbooks in Provo, Utah. News of his first signing got picked up by a local paper, and it brought in hundreds of people who bought the book in hardcover. Now, with each release, he still does his launch party at a local store.

But there are other ways to make your signing an event. I've known authors who have thrown.…

Very often, such parties have an extra cover charge that fans are happy to pay, simply to get a little one-on-one time with their favorite author. One thriller writer, for example, throws an annual dinner party where he charges fans a $1,000 per plate for one of twelve spots at an intimate table. Every year, he fills up.

In short, rethink how you handle events. If you imagine that no one is interested in your signing and that no one will show up, you'll sabotage your own signing. Consider ways to do cool events, even on a small budget!