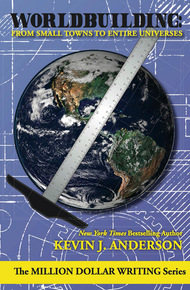 International bestseller Anderson has created many extensive fictional universes, ranging from sweeping galactic empires to complex steampunk fantasies, to humorous monster-filled cities. He has become known for his skill in worldbuilding.

In Worldbuilding: From Small Towns to Entire Universes he describes his techniques in creating a rich fictional setting, leading writers through the countless questions and topics one must consider. Whether it's geography, climate, politics, economics, society, religion, science, arts, or history, all of these ingredients form the basis for a believable setting for your story to unfold.

Worldbuilding—I've created and played in many different universes, from big SF, to epic fantasy, to steampunk, to humorous urban fantasy. (I've also destroyed more than my share of planets…but at least I know how to put the pieces back together again. I have given a worldbuilding workshop at numerous writers' conferences and received enough feedback and encouragement to put all that information down in a book. This volume contains all the ingredients you need to know to construct entire universes. – Kevin J. Anderson

One:
Creating Universes,
Big and Small

I've written 130 novels, and I've built a lot of worlds—some of them entirely from scratch, others similar to the neighborhoods I can visit every day, with just simple modifications and altered details. I like to paint on a big literary canvas, and I like to fill in all the details.

In my space opera series, the Saga of Seven Suns and the Saga of Shadows, I created the vast Spiral Arm, with rival galactic empires, trading conglomerates, diverse cultures (human and non-human), hundreds of planets, exotic climates, bizarre alien races, and extraterrestrial life forms—all as a backdrop for my characters to let me tell their stories.

In my Dan Shamble, Zombie P.I. series, I took a more whimsical fantastic approach on a modern-day America ten years after an utterly improbable sequence of cosmic coincidences unleashed werewolves, ghosts, vampires, mummies, and zombies back into the world. The monsters have set up a section of the city, the Unnatural Quarter, where they can live and let live (so to speak). They operate embalming parlors, cafes, gambling joints, All Day/All Nite fitness centers (including treadmills without mirrors, so as not to embarrass the vampire clientele). And, yes, zombie detective agencies. The monsters experience the same types of problems that normal people do, though maybe a bit more extreme. It's all played for laughs, and it may seem silly—but I mapped out the rules, laid down the details and followed them consistently throughout.

In my ambitious "sailing ships and sea monsters" nautical fantasy trilogy, Terra Incognita, I developed a world much like Medieval Europe during the Crusades, with a partially unmapped world, ambitious sailing expeditions—as well as a smattering of magic, and of course sea monsters. Even though the fictional world was closely based on the Portugal of Prince Henry the Navigator or the Mediterranean of the Crusades, I still had to understand basic questions such as: How do sailing ships work? How do the sailors navigate? Does this civilization have accurate clocks (vital for navigation)? Do the navies have gunpowder? Do the countries have the printing press? In Uraba, my continent modeled after desert-like Arabia, where did they get the trees to build their wooden ships? Where are the mines for the metals they needed?

All those questions had to be answered—and the answers in turn drove and shaped the storyline.

I have done a lot of work in established universes based on films, TV, or well-known novels. Often the audiences are already extremely familiar with the characters and details. For instance, I've written numerous projects in the universes of Star Wars, Dune, X-Files, Batman, Superman, Star Trek, and most recently in the Heroes Reborn TV show. When I worked on Star Wars, I had access to multiple reference books, information gathered by generations of fans and Lucasfilm experts. In my Superman novel, The Last Days of Krypton, I had to pull together almost ninety years of scattered hints and assertions about Superman's home planet, about his father Jor-El, about how Krypton had exploded… and much of the established canon was completely contradictory. I had to find some way to synthesize it, force it all to make sense. And sometimes such challenges led to quite wonderful solutions.

When my friend Neil Peart, the drummer and lyricist for the legendary rock group Rush, invited me to work with him on a storyline and novel for their steampunk fantasy concept album "Clockwork Angels," he told me his vision for a pleasant Victorian-era world run by a rigid but benevolent figure named the Watchmaker. In Albion, alchemy works, and the Watchmaker had discovered the secret of creating not only gold, but also a plentiful alchemical energy source called coldfire. Albion was wealthy (because of all that gold) and comfortable (because of all that cheap energy), practically a utopia. The Watchmaker wasn't a brutal dictator; he just wanted everything to run efficiently.

But of course, not everyone wants that. Enter his nemesis, the Anarchist—a "freedom extremist" who wants to destroy all vestiges of order and civilization, so human beings can achieve true freedom by solving all of their own problems. But not everyone likes chaos either. Our hero, Owen Hardy, is a young man caught between the two forces.

When I started asking Neil detailed questions about the steampunk world of Albion, he said, "You're the master worldbuilder. I want to see what you come up with." So I started thinking… if gold was so plentiful, how would the economy work? Would silver then be more valued, as a rarer metal? Could people travel about freely? From the story, there had to be airships, pirates, lost cities, a steampunk carnival.

Neil made it clear that he did not want Albion to be a harsh dystopia, but a relatively pleasant place. Most people really do want the trains to run on time, and they want to be confident of a nice home, a comfortable life, and food for the table. Not everyone would be comfortable with too-rigid laws, however, so there were outliers, people who pushed the rules… like a traveling steampunk carnival or a hearty airship captain.

I began to sketch out the network of Albion's small towns, the steamliner routes, a traveling airborne train whose mournful whistle would inspire dreams in a small-town boy like Owen Hardy. Eventually, I fleshed out the world so beautifully and added so many details, which sparked so many ideas for countless other stories and characters, we couldn't fit it all into one book, and so we wrote a companion novel, Clockwork Lives.

In this book, I'll lay out some of my worldbuilding techniques, show you some of the puzzle pieces you'll need to fit together, the blanks you'll have to fill in.

Building a world depends on more than just drawing a map and imagining some terrain. A fully fleshed-out fictional world has cultures and economics, varying climates, religions, arts, politics, social expectations. After I've guided you through all of the considerations, you'll be ready to build your own fictional world.

But you don't have to stop at just one.