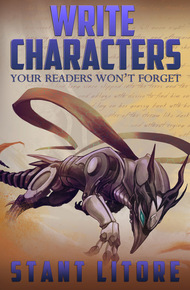 "I just don't care enough about your character."

Write Characters Your Readers Won't Forgetis a toolkit for addressing that issue. Packed with 30 exercises, abundant examples, and practical strategies, this guidebook will help you write unforgettable characters who "come alive" on the page, create compelling dialogue, and chart more breathtaking emotional journeys for your characters.

Stant Litore is one of an ever-growing group of ambitious Denver-area writers, and we cross paths often at local writers conferences or science fiction conventions. Stant pitched me one of his books for an earlier StoryBundle and he proved to be so energetic and such a persistent promoter that I have been looking for an excuse to bring him aboard on another one. NaNoWriMo gave me that excuse. – Kevin J. Anderson

6. What Makes Your Character Tick

If you are going to write a complex and attractive character whose strengths are also their weaknesses and who is riveting on the page, you need to:

2.Practice revealing that history in subtle and purposeful ways on the page.

Here are five ways that you can dig deep into your character's history and find out what drives them and what might get revealed (or concealed, then revealed) in your story:

Use this checklist to give you ideas for investigating the history and motivations of a character who remains mysterious (or "flat") on the page.

In fact, even if you already have your character's backstory plotted out, this checklist can help you identify ways to introduce that on the page.

Example: A Prayer Before Bed

In the film Shadowlands (dramatizing scenes in the life of C.S. Lewis, the author of The Lion, the Witch, and the Wardrobe) there is a touching scene in which Jack Lewis brings his wife, Joy, home. She is dying slowly of cancer, and they married while in the hospital. After tucking his ailing wife gently into bed, Lewis, a long-time bachelor (he is about fifty), is unsure what to do. "Just do what you do every night," Joy tells him.

Lewis shambles about the room, walking through his routine, narrating it: "Well, let me see, first…I come in through the door…and I walk over here…" He looks puzzled as he hangs up his coat and hat; he has never had another person in the room during his night-time routine. At last, he kneels beside the bed, folds his hands, and bows his head in prayer. "And then…then I pray," he says.

Look how much that character's habits reveal about him! Not only that, but the habits are shown to the reader at a key scene where the writer has opportunity to reveal things not only about C.S. Lewis but also about Joy, and about their relationship. It would be a mistake (in most cases) to open a chapter with a lengthy description of the character's habits. Find an opportunity to reveal them where the revealing has impact on the plot or on relationships that are key to your story – as in the case of Shadowlands, where one character is sharing his habits with another for the first time.

Make a sketch of your protagonist's morning routine and consider its implications. What is the first thing your character does, each day? Does your character hit the Snooze button on the alarm eighteen times before rolling (literally) out of the bed, with a groan? Does your character leap to her feet and begin doing aerobics in front of the mirror? What kind of alarm clock does your character own? Does it beep and screech? Does it play music? What station? (In Jim Butcher's The Dresden Files, Harry Dresden never punches Snooze because he has a Mickey Mouse alarm clock, and he tells the reader that the couldn't live with someone who would punch Mickey Mouse. That is a revealing detail!) If your character lives with a spouse who is not a morning person, what does she do first in the morning? Rise and tiptoe softly out of the bedroom, gently, not wanting to wake him? Does she kiss his shoulder or his hair before tiptoeing out? Is there a morning when, angry, she breaks from routine, goes to the kitchen and slam cabinet doors and slam the skillet down on the stove, and generally makes as much noise as possible? Is there a morning when she decides to wake him in a more intimate way?

Make a sketch of your protagonist's evening routine and consider its implications. What is the last thing your character does, before bed? Does he cover his head with a pillow? Does she sing softly to herself or say mantras, hoping to ward off nightmares? Does she clutch a teddy bear close, almost childlike, feeling in the moment before bed each night a terrible loneliness? Does he drink himself to sleep? Does he masturbate? Does he brush his teeth, fastidiously, for exactly two minutes, and then put his brush carefully in its holder and tidy the sink before approaching his carefully made bed? Does he read one chapter each night from a novel before flicking off the light? Does he leave all the lights on? Does he leave just one light on, maybe in the hall? Does he, each night, check the bedside drawer to make sure his gun is ready?

Our habits define us; they structure our lives and they reveal about us more than we think.