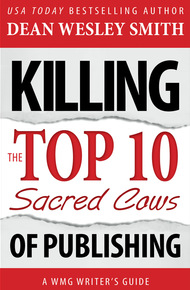 The publishing world continues to evolve, but myths about who can make a living as a fiction writer maintain a life of their own. Whether you pursue traditional or indie publishing success, you need to know the pitfalls and traps that undermine many writers' careers.

Dean Wesley Smith is a troublemaker. He’s also one of my closest friends. He and I have worked in the publishing industry for more than a quarter century, and he’s been digging into the nuances of bookselling, publishing, and writing for much of that time. What he has discovered is astonishing and thought-provoking. This will give you a lot to chew on about the business. – Kevin J. Anderson

In 2010 I started doing short blog posts about the myths that hurt fiction writers that I had seen over my forty years in publishing. I honestly have no idea why I started these articles, but right from the start I called the myths of publishing "Sacred Cows."

Over the next few years I wrote upwards of 50 "Sacred Cows" knocking down one myth or another, or at least attempting to. And then two years ago I went back and updated some of the myths as indie publishing started to take hold.

Then, over the last two months of 2013, I updated these ten again, picking what I thought were the ten most damaging myths that writers believe in modern publishing.

An Important Note About This Book

In this book, I am only talking about commercial fiction. Nonfiction often has similar problems, and fiction written as a hobby has yet a different set of problems and myths.

But for this book, I am talking to writers who want to make a living with their fiction and sell a lot of copies, either through traditional publishers or through their own indie press.

So Who Am I to Try to Kill These Myths?

I think at one point or another since 1974, I fell into one or more of these myths, sometimes more than one at a time. Before I fell for the rewriting and writing slow myth, I wrote and sold two short stories and a lot of poetry in 1974 and 1975. Then I went down into the myths taught by college classes and didn't sell a thing for the next seven years.

Once I finally got out of those myths in 1982, I sold professionally over 200 short stories and wrote far more, and I have sold traditionally over 100 novels and written even more. I am considered one of the most prolific authors working at the moment.

During the years I was also an editor, starting as the first reader and publisher for Pulphouse Publishing in 1987, then staying a publisher as well as editing some lines for Pulphouse. I also helped my wife, Kristine Kathryn Rusch, at times as a first reader for The Magazine of Fantasy and Science Fiction.

In 1995 I started an almost three-year run as the fiction editor for VB Tech Magazine. Then in the late 1990s I also went to work for Pocket Books as the fiction editor for Star Trek: Strange New Worlds. I did that for ten years. Now I am one of the executive editors for Fiction River and often edit a volume myself. I was nominated five times for the Hugo Award for my editing.

And during all those years being a publisher and editor, I got to talk a lot with writers coming into the business. And all of them were dealing with one myth or another. Often a myth had them stopped cold.

In the late 1990s, Kris and I also started to teach, trying to help professional writers who were stuck to move forward in their careers. We've been doing that, as well as teaching online, since. Many, many of the writers we've helped were stuck in the myths.

So I hope this book helps you with your writing. I'll be happy to answer questions on my website at www.deanwesleysmith.com. And I am writing more Killing the Sacred Cows chapters there, so stop by and join in the fun.

I will repeat this over and over throughout this book. But I want to be clear right up front here.

1… Every writer is different.

2… And if you can't enjoy your writing, what is the point?

Now off into the myths of fiction writing. There are a lot of them.

In this book I've tried to take a pretty good shot at the top ten.