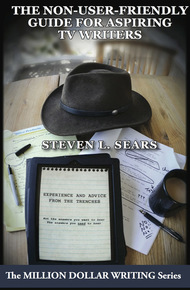 Steven L. Sears has been a Staff Writer, Story Editor and Producer on such shows as Stingray, The A-Team, JJ Starbuck, The Highwayman, Father Dowling Mysteries, Swamp Thing, and Raven. In addition, he has written for shows such as Hardcastle & McCormick, Superboy, The Hollywood Detective, Jesse Hawkes, Hardball, Grandslam, Walker–Texas Ranger, and many others, as well as developing Television Pilots, Features, Interactive and animation for several studios and networks. He was Co-Executive Producer of the hit syndicated series Xena: Warrior Princess, and the Co-Creator and Executive Producer of the Columbia/TriStar Television Series Sheena. Stepping outside the world of Film and Television, Steven co-authored the novel series VilleAnne with author Peter J. Wacks and co-created and co-authored the graphic novel Stalag-X with Times Bestselling author Kevin J. Anderson.

Steven L. Sears has had a successful career in film and television encompassing over thirty years of involvement at all levels. From his beginnings as a staff writer on the hit NBC show The A-Team , to Co-Executive Producer on the hit series Xena-Warrior Princess for MCA/Universal, creator and Executive Producer of Sheena for Sony/TriStar Television, and many pilot and development deals with the major studios and production companies, he has amassed a huge amount of experience and knowledge about the inner workings of the entertainment industry. In The Non-User-Friendly Guide for Aspiring Television Writers , he shares that experience and gives advice for those considering a career in television writing. Instead of the traditional.

So, there are other kinds of writing besides novels. I met Steven L Sears when my first Star Wars novels were hitting the bestseller lists and his show XENA: WARRIOR PRINCESS was topping the ratings. We were both guests of honor at a convention, and we hit it off. Steve compiled this book of advice over many years, and I encouraged him to publish it … so I finally published it. This is a wealth of advice and anecdotes; it’s like having a long, intimate lunch with Steve without having to watch him eat. – Kevin J. Anderson

The TV industry isn't a very user-friendly business. Oh, they're very friendly and personable, and I've met with countless warm welcomes at pitch sessions and working lunches, but it's almost impossible to figure out. I've published over 125 novels with more than fifty bestsellers… but I haven't been able to figure out TV yet.

Steven L. Sears has. We've crossed paths at countless pop-culture and media conventions where we were both guest speakers (me to talk about my Star Wars novels, Steven to talk about his work on Xena: Warrior Princess). We've been friends for twenty years—quite close friends, actually.

Because we got along so well, we naturally decided to try working on something together, and I came out to LA to stay with him while we developed a few pitches to take to the networks. But I realized that I knew little about the industry itself, all those secret handshakes and decoder rings. (It turned out that just watching TV did not give all the qualifications to write for TV.) It was going to take a career to learn all the things that I needed to know… and fortunately, Steve had spent his career working on countless television shows as a writer, producer, show runner, and series creator. You know the shows: The A-Team, Riptide, Hardcastle and McCormick, Swamp Thing, Superboy, Walker-Texas Ranger, Xena: Warrior Princess, Sheena, and so many others.

He already knew the stuff. And he had been putting together his advice, a large database of experience and knowledge, culled from his helping others online and in classes. He let me read his notes, and I found that he was able to present all that important information in an easily accessible manner. How cool was that? Like having a mentor on a stack of printouts.

I urged him to polish up all that material into a book and, despite his reluctance to become a book writer (having seen how glamorous my life as a writer is), I succeeded, and I'm very pleased with the result. And The Non-User Friendly Guide for Aspiring TV Writers just happens to fit perfectly into the "Million Dollar Writing Series" that my own WordFire Press is publishing. (I'm sure Steven makes a point somewhere in this book about "knowing the right people.")

In The Non-User Friendly Guide he shares his experience in a simple and conversational manner. It's like having lunch with Steven and asking him questions about the business. Without having to watch him eat.

This book is an experiential book. By that, I mean that you aren't going to find academic discus-sions on the Entertainment Industry, diagrams of story structure, or pedantic examinations of the creative process. No, this book is all about my experiences and the knowledge I have gained from them. I'm going to attempt to write it in a very accessible and friendly manner, much like I would speak if you were to just sit with me for lunch and ask questions or ask for advice. Sometimes, these might be questions that are just curiosities that occur to you, some things you don't normally hear people talk about. Or questions about the difference between the theory of the Industry and the reality of it. That's the real core of this book.

So how did this come about?

In my many years of working as a professional in the Television industry, I have had numerous people ask me questions about the business. With the expansion of the Internet, this has increased a hundredfold. Obviously, there would be many things that just kept cropping up over and over again. Not too long ago, I finally got it through my head that it would be easier to document my answers so that I wouldn't have to retype everything each time I was asked.

I soon realized that I had compiled a list of questions from these aspiring Television Writers. This list implied two things: One, these were questions that really meant something to them and, two, they weren't getting the answers anywhere else. But when I responded, I soon found out that many times they weren't always happy with the answers I gave. In some cases, they even debated whether I was telling them the truth or not.

In fact, though, this was never intended to be a book. I had compiled these questions and answers for a long time, but never intended to publish them. But when I decided to do it, I really thought I was onto something original. An approach that was unique. Something that would stand out. I was in a book store chatting with a friend, who was the store manager, about the possibilities of such a book. She liked it. In fact, she liked the one that was already on the shelf.

Max Adams is an awarding winning Screenwriter who wrote "The Screenwriter's Survival Guide" and, like myself, has a high internet presence. Max uses the same format; mining her material from the volumes of e-mail she has received. Fortunately Max's area of expertise is in Film. And, though there is cross-over and grey areas, Television and Film are two different animals with the same genealogy.

So why would I mention it here? For the obvious reasons. Although many won't believe me, I developed this idea and structure on my own. So did Max. Elsewhere in this book I'll talk about how some ideas just happen to more than one person at a time, no matter how original you think it is. Well, this is a good case in point. You can accept this as truth or not, but I have a pretty strong bar for my own ethics. I give kudos to Max for acting on her idea immediately and getting it published. And if you like this format and want to see the Feature side of the business, I recommend that you give her book a look-see.