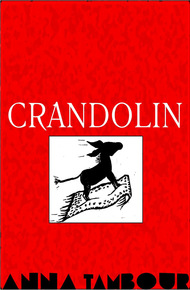 Anna Tambour is a reluctant writer of author biographies: "Write something clever about yourself revolts me. The higher a writer's personality grows, the more it stunts the offspring." Her novel Crandolin was shortlisted for the 2013 World Fantasy Award and she lives in the Australian bush. Her newest collection is The Finest Ass in the Universe (Ticonderoga Press).

In a medieval cookbook in a special-collections library, near-future London, jaded food and drink authority Nick Kippax finds an alluring stain next to a recipe for the mythical crandolin. He tastes it, ravishing the page. Then he disappears.

The only novel ever committed that was inspired by postmodern physics AND Ottoman confectionery.

Anna Tambour is a writer living in Australia. After a long correspondence I had the good fortune to finally meet Anna on my first trip to Australia. We had a wonderful time together as she showed me the sights in Sydney. I was delighted to discover that she was originally from Florida so we had much to share. I feel a kinship with her, as if she were a long-lost cousin.

Her work has always been strangely beautiful and this novel is no exception. A medieval cookbook is the catalyst in this novel, enticing her main character, as well as us, as we tag along on these travels to discover the truth behind the recipe for crandolin. The adventures in this book will take you to Russia and all through Central Asia. Enjoy the ride! – Ann VanderMeer

THE LUMINOUS STAIN ON PAGE 67 contained traces of quince, rose, grains of paradise, ambergris, pearl, cinnamon, and what could only be surmised. Kippax surmised, all right. Blood. The colour of the stain (livid pink) confirmed what he had read, though no test could. This cookbook was indeed, as the frontispiece said, For the Adwentoursomme.

It had once been common knowledge that drinking crandolin blood cursed the drinker to a long life of madness, and the recipes on the two pages driving Kippax mad were for Crammed Amphisbaena, and A Pudding Mayde of Crandolin. The recipe for amphisbaena added only butter, no spyce, and said serve with no sauce but onely salte.

This morning Kippax fed a miserly scrape of the stain, smuggled out under his fingernail, to his portable electronic tongue. The gas chromatograph, as sensitive and stupid as a bloodhound, tasted spyce compounds aplenty but no butter, and then ran just to look like it was doing something. It was clueless.

The sauce had to be crandolin.

Amphisbaena was a daring catch, this serpent with a head at each end. But crandolin cost at least one life. It was once-upon-common-knowledge that crandolins were light pink as the dawn they imitated as they probed cracks in the shutters protecting pink virgins in their beds. They could only be caught when Crikey! This blood is also ancient virgin blood.

He felt an attack of dizziness coming on, but a quick double punch made his ears ring—that problem solved, the better to tackle the big one.

The temptation to taste the crandolin had been terrible before (he was confident that his palate could sieve the spices from the meat). But the temptation was too much now, for any mortal. And in some moods, Nick Kippax did tell himself that he was indeed, a mortal.

He wet his finger and touched the stain—almost.

At the last millimillimetre, he drew his finger back into his meaty palm.

He felt his blood rushing around his body. It moved with as much purpose as a crowd of people released by a crosswalk light. Fascinating? No.

He picked up the open book and sucked the parchment.