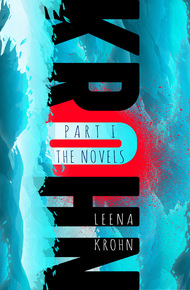 From cities of giant insects to a mysterious woman claiming to be the female Don Quixote, Leena Krohn's fiction has fascinated and intrigued readers for over forty years. Within these covers you will discover novels that feature a pelican that can talk and a city of gold. You will find yourself exploring a future of intelligence both artificial and biotech, along with a mysterious plant that induces strange visions. Including two novels not previously published in English. One of Finland's most iconic writers, translated into many languages, and winner of the prestigious Finlandia Prize, Krohn has had an incredibly distinguished career. For readers of Ursula K. Le Guin, Milan Kundera, Virginia Woolf, Tove Jansson, and Italo Calvino. Featuring a foreword by Jeff VanderMeer.

My first introduction to Leena's fiction was the novel Tainaron in 2005. I remember being at the Miami Boat Show and sitting off to the side totally engrossed by this book that I couldn't put it down. Luckily it was a short novel, because I had a presentation to do later that day. I will never forget how this book made me feel; like I was somehow visiting an alien world that was yet oh-so-familiar. Leena's fiction continues to appeal to me in this way. She has a way of being both down-to-earth and surreal at the same time. She's a true original. – Ann VanderMeer

"At the grave of the tuatara" (from the novel The Gold of Ophir, translated by Hildi Hawkin)

Who would place a flower on the grave of the tuatara, that little monster? Who would feel longing or regret? Is it not, rather, a relief to know that one will never again have to look into its cold, round, skull-eye, which reflected the movements of the heavens so accurately, but in whose convex distorting mirror one saw one's own form bowing, out of proportion and ridiculously large-headed?

But when they arrived at that insignificant mound of earth, surrounded by stones that the children had placed in a circle so that, in its solitude, it recalled the graves of the Etruscans, they saw Babel there. Mr Babel, in other words, he who was also sometimes known by the name Mr Good-as-Gold.

He was crouching on the low stone like a frog, his face damp and contorted. He had not brought the tuatara flowers, either, although there were flowers to be seen there: a field of scabious, whose reddish, ball-like flowers nodded at the heads of their long stalks both inside the stone circle and outside it.

As always when they saw Babel, they were embarrassed, because they did not know what language they should speak to him; but, as was his custom, he released them from their difficulty by bursting into speech himself - at first, it was true, interruptedly, for deep sobs tore his chest.

Oh, had they not already had their share of weeping inside the rotting rooms of the Tabernacle… But these tears were of a different kind; they were fresh and yet warm.

And soon Babel's stream of speech was pattering as plentifully and naturally as real spring rain, and they could not understand his words any better than before. But they could hear that he was speaking sincerely and directly and of everything that was in his heart.

When he clasped their hands, one by one, and pressed them, looking into their faces with shining eyes, they began to comfort him like a child who has fallen over, and at the same time themselves and each other, as if the deceased were their dear and only friend or their own little one, as if he had only just been laid to rest and they were all part of a great funeral procession.

Were they hoping, at the grave of the tuatara, that when their turn came there would be someone whose words — if he were to remember them — would hold as living an echo as Babel's double Dutch?

But scarcely even one of them thought that the sorrow Babel expressed so freely concerned only the reptile's death. They could not know whether Babel was grieving more for the lost age of the Gold-Washers and the ruination of the Tabernacle or some private sorrow of which they knew nothing.

Or was he lamenting that apparently no fate had been prepared for them other than the one that small, scaly creature had already met, with its tail and its three eyes and its blood-spattering, wrinkled eyelids…