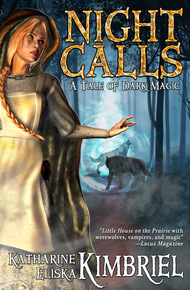 In the beginning Katharine Eliska "Cat" Kimbriel was nominated for the Campbell Award for Best New SF/Fantasy Writer. Kimbriel wrote literate, character-driven SF and Fantasy. Then she became really ill and tried to die. Do you know that if you win the throw with Death, you become a wizard?

Her SF and fantasy are available as e-books. You can find The Chronicles of Nuala through all major Internet distributors. DRM-free editions are available at Book View Cafe. The Night Calls novels (Night Calls, Kindred Rites, and Spiral Path) are available in trade paperback as well. Her chapbook also contains one Alfreda short story. There's a new Night Calls novel underway, she's charting an urban fantasy based in Austin, TX that begins with an old curse, and also a Nuala chapbook. Find her on the Internet, including Facebook.

"When you have the Gift, your life is not your own."

I was born to a family that harnessed the winds and could read futures in fire and water. Yet my mother kept her secrets.

Then the werewolf came, sharing his madness.

Descended from powerful magic-users, but ignorant of her heritage, young Alfreda Sorensson learns magic and wisdom from her extended family in an alternate early 1800s Michigan Territory.

In Night Calls, Katharine Eliska Kimbriel does something I absolutely love. She combines history and magic. In this case, the history is early American history. Yes, you'll find werewolves and vampires here, but more than that, you'll get a sense that the events in this book actually happened. These alternate history fantasy novels used to be called historical fantasy. Nowadays, traditional publishers have no idea how to handle books like this because they don't fit into neat and tidy categories. But I have a category: I call it great storytelling. – Kristine Kathryn Rusch

I wasn't there when Papa killed the wolf. But then girls usually aren't allowed to hunt them.

This was an ongoing argument in our household, the hunting thing, and that night was no different. As always, I lost. Promises to stay back, demonstrations of stealth, even stories of bravery while wringing chicken necks—nothing worked. Papa may boast that I'm eleven going on forty, but I'm the only daughter; that means burping babies and grinding wheat instead of fun things like tracking critters.

It was worse when Dolph and Josh came back, laughing and shouting, covered with blood, stumbling over their words as they both tried to tell Momma what had happened. I was by the fireplace stirring the soup when they came in, and I kept my back to them while they told their story.

"And then when we chased him out of Faxon's sheep pen—"

"First we had to send for the surgeon, for his little girl—"

"Boys, you're bleeding!" Momma finally said weakly, lifting a kettle of hot water from a pot hook swinging above the burning logs.

"It's just sheep's blood, Momma, don't worry," Josh said quickly, brushing at his coat and starting up the kitchen stairs. "That ol' wolf only got a few snaps off before Papa ran him through with his spear."

I couldn't resist a smile; Josh's voice always squeaked when he got excited. He might have two years on me, but I'm a lot older than he.

"Papa was great. Everyone else was millin' around swinging torches at it, but Papa just charged right in. Stuck that ash spear right through the wolf and pinned him to the ground." Dolph got to the heart of the story, as always. "He thrashed a long time," Dolph added thoughtfully, moving to the basin of water Momma poured for him. "Snagged a few people, but nothin' too bad. He sure chewed that little girl up early on, though."

"Never heard of a wolf going after a person," I muttered, giving the soup another swish before moving to pull Papa's wine crock from the ashes.

"Shows you haven't heard everythin', doesn't it?" Josh hollered from above.

"I haven't, either," Dolph started, taking my part like he always did.

"She's right," came Papa's voice. We all looked up, and there he was, standing tall at the wooden door, dark stains blotching his worn breeches and shirt. "Wolves don't usually bother people. That one might've been sick. You boys get some sundew infusion from your momma and pour it all over your arms and legs. I saw you touching its mouth—didn't you think? You know animals carry the foaming sickness in their spit."

"We didn't get nipped, Papa," Dolph protested. "We were careful."

"How about the cuts and scratches you got working in the field today?"

Well, Dolph didn't have an answer for that, of course, so Momma made me steep some sundew. She practically made them bathe in it, but they were acting like it was nothing, and not scrubbing very hard.

When I finally brought Papa his wine, I couldn't resist asking what he'd done with the wolf.

"Strung it up by the leg in a tree, darling," he said, sipping slowly at the warm liquid. "The coat's owed to the kill, so I'll get it tomorrow."

Papa studied me over the rim of his cup, his sky-blue eyes gleaming in the soft light. "A lot of blood and gore, skinning a wolf," he said finally.

"I'm not afraid of a dead wolf," I declared.

"Bet a live one would'a spooked you," came Josh's scornful voice as he stomped down the oak stairs to get some dinner.

"Not Allie," Dolph said quickly, smiling at me.

I grinned back at him and then scowled at Josh. "I'm not scared of no wolf! At least not with a spear by me." Turning back to Papa, I added under my breath, "There's lots of things scarier than an old wolf."

"'Any wolf,' Allie, not 'no wolf.'" Papa's words were gentle. He didn't scold the boys much, but he always corrected me. He smiled, then, and reached to tug on one of my braids. "Ripe as wheat, you are, child, and not just your long locks. You can help me skin the wolf, if you do your chores first—"

"Oh, I will! I will!" I nearly upset the wine, tossing my arms around him, but Papa just laughed and hugged me. Momma started in right away, of course, but he waved her off.

"Child's old enough to help with the pelts this winter, Garda. No sense waiting until the snow flies. She'll be fine with me, and Dolph's old enough to supervise the harvest."

I danced back to the soup pot, and when Papa told the boys he needed them in the hay fields, not watching him and me skin a varmint, well, I'm sure I started floating. Let Josh watch little Ben and Joe! I was gonna skin me a wolf.

The sunrise was patched like a red 'n' gold quilt, but I didn't pay it no mind. I was up in the dark, collecting eggs by feel and setting the milk out to wait the cream rising. Momma shooed me away and said she'd get it—that was her way of apologizing for last night. She doesn't like things like wolves and bears; that sort of thing scares her. But she doesn't want to make me frightened for no reason—I heard her tell a neighbor that once.

"Watch your step out there, Alfreda," she said by way of parting. "There's more between heaven and earth than any man knows, I'll tell you." I must have looked as confused as I felt, because she waved me off, her worn, pale face looking a little disgusted. "Get me some onions and garlic from the garden on your way back!"

And so I was free. There was nothing like walking through the long yellow grass, following the golden shadow that was my father. People always said Dolph and I were like him, both in looks and manner, and it was a compliment. He was the smartest man in our village. Even smarter than Father John, I thought, although Momma was always running to the priest. I don't think Papa's family ever had any use for gods. Momma's family was Old Irish and Old German, but something went wrong somewhere, and the goddess wasn't enough for her. Why she chose the priests she never actually said, but if gods helped Momma more than the oldest ways, that was all right with Papa. "Whatever works"—that's what he always said.

"Do you think something ate the wolf, Papa?" I called as I tried to keep up.

"Hope not, child. A wolf pelt is worth a lot. We should be in time, the sun's just rising." His deep voice carried easily through the underbrush, although I'd lost sight of him.

"How much farther?" I asked, catching my cotton dress on an ash shoot.

"Not f— Alfreda, stay where you are."

I stopped tugging on my dress. His tone would have warned me that something was wrong, even if he hadn't used my full name. A bear? I waited, silent, for him to call, all the while carefully unhooking my clothes.

There was a thunk as his ax bit into wood, and the sound of something heavy falling. The grunt surprised me—had he tried to break the wolf's fall? I crept toward the clearing.

"Papa—" Before the word was out I froze, as motionless as a stone. The sweet smell of blood tickled my nose, and something queasy began churning in the depths of my stomach. Somewhere off in the distance was the sound of a beautiful birdsong, one I'd never heard before. Blood and song—it was almost more than I could bear without weeping.

He looked up from the twisted carcass before him, his face set and gray. "I told you to wait." No anger; his very lack of emotion frightened me.

"I . . . I heard you, like you needed help," I started, not sure if I should keep walking or hold my ground.

He made an abrupt gesture that drew me to his side. We both stared down at the torn and bloody lump of flesh and black fur, slashed by dog and steel.

It was a man. At least I thought it was . . . it certainly wasn't a wolf. But it was hairier than any man I'd ever seen, even the palms and soles of the feet; and the teeth seemed wrong. I was sure I'd never seen him before. For a moment I felt faint—how could my father have made such a mistake? It was a full moon last night, you could see for miles—

Then I understood, and I started to tremble. I'd heard tales about wolves who really weren't wolves...