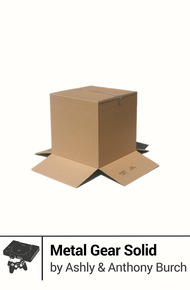 Ashly Burch is a voice actor and writer, and she speaks about representation and issues of gender and identity in the games industry. Anthony Burch was lead writer of Borderlands 2 for Gearbox Software and is currently a writer for Rocket Jump.

The only problem: The Burches grew up but their all-time favorite video game didn't. After nearly two decades, Metal Gear Solid's once-innovative stealth mechanics seem outdated, the cutscenes have lost some of their action movie punch, and the game's treatment of women is often out of touch. Witness a celebration/takedown of this landmark game with the combination of insight and hilarity that Ashly and Anthony have made their careers on.

In our funniest book, these siblings critique a brilliant, ridiculous, soulful, flawed game that they've love unconditionally since they were kids. The back-and-forth volley between authors creates a conversational tone that I find pretty irresistible. The book goes through the game, picking apart the mechanics, characters, plot, and tone, delivering a ton of insight on the HUGE problems we can have with a work of art that we will nonetheless love forever. – Gabe Durham

"When I was a baby boy," he said in an interview with G4, "I was forced by my parents to watch movies, even before I knew who I was. I grew up on movies."

In college, Kojima got his hands on a Nintendo Famicom, the system that would eventually make its way to American shores as the Nintendo Entertainment System, and played Super Mario Bros. for the first time. Almost instantly, Kojima fell in love with video games and the possibilities they presented. If he could combine the fun of Super Mario Bros. with his vast knowledge of film, Kojima thought, he could make something fantastic.

In 1986, he joined Konami. Which was great, except he had no idea how to make video games. His job title was "planner," and he was the first person at Konami to hold it. His co-workers felt he was a fraud—some huckster who had talked his way into a sweet game development gig without possessing any actual knowledge of the process. Kojima's bosses also canceled his first project, "Lost Warld," which gave his co-workers more ammo. "Instead of saying 'Hi,'" Kojima told G4, "[people] would say, 'At least create ONE game before you die!'"

Evidently, Konami was full of dicks.

Shortly thereafter, Kojima came up with an idea for a military video game that, unlike all the other military games of its time, wasn't about fighting people. He wanted to make a game reminiscent of the film The Great Escape, one in which you spent more of your time running and hiding than facing the enemy head on.

His game, Metal Gear, was one of the first stealth video games ever made. Metal Gear introduces Solid Snake, a badass soldier who works for Big Boss, an even more badass soldier. While on a mission to rescue a bunch of POWs from a rogue fictional nation known as Outer Heaven, Snake finds out that Big Boss is actually a bad dude and has been leading Outer Heaven all along. Snake kills Big Boss (or so he thinks) and escapes. The game emphasized caution and observation over blind force.

And it was a hit. Released in Japan in 1987 for a computer called the MSX2, Metal Gear spawned a Nintendo port for the American market (which even got its own, noncanonical sequel, Snake's Revenge) and a Japan-only MSX2 sequel titled Metal Gear 2: Solid Snake.

Metal Gear 2: Solid Snake repeats the plot of the first game, this time set in the real-life location of Zanzibar. At the end, Big Boss shows back up because it turns out he'd never really died! And also Big Boss reveals he was Snake's father, and then Snake kills him again-but-for-real-this-time. If you actually play Metal Gear 2, some of that stuff doesn't happen, and is instead retconned bullshit from Metal Gear Solid. But don't—like, don't get distracted by that. It's fine. Just roll with it.

Fast-forward to 1994 and the release of the PlayStation. Kojima wanted to use the advanced 3D graphics offered by the PlayStation to bring Metal Gear into a new era. An era of cinematic storytelling and intense immersion. An era of high action and tactical espionage. An era of staring at butts.

In Metal Gear Solid, Solid Snake is once again brought out of retirement to combat a new threat to America and/or the world. A group of terrorists, comprised of psychopaths led by someone calling himself Liquid Snake, have taken control of a nuclear disposal facility and are threatening to launch some of the missiles at random targets unless they're given the remains of Big Boss. After arriving at the nuclear disposal facility on the Alaskan island of Shadow Moses, Snake sneaks around and shoots people for like ten or so hours, a good portion of which are super long cutscenes. Solid Snake and his team are confused—who the hell is this knockoff Snake, and why does he want the corpse of Big Boss?

Ash and I were born two years apart, me in 1988 and her in 1990. We got along about as well as any two siblings can get along. We both liked cartoons, we both liked video games, and we both wanted to do something creative when we grew up even if we didn't know exactly what. We weren't completely the same—Ash liked anime, I liked John Carpenter movies. I tried my best to grow a healthy layer of badass stubble, Ash sang a lot of Celine Dion.

Later in life, my friends would tell me how envious they were of Ash's and my relationship. There were fights—you'll never not have fights as kids—but there were many more moments of real bonding. Hanging out, watching Toonami. Trying, and failing, to beat Kirby Super Star with 100% completion. We loved each other in that boring way that all siblings kinda-sorta have to love one another, but we were also pretty damned good friends.

I remember our first experience with Metal Gear Solid.

We had a PlayStation demo disc with Metal Gear Solid on it. I don't remember exactly how or when we got it, but I remember it was one of the first discs we ever shoved into the squat, gray, plastic box that Ash received for her birthday. It was called the Interactive Sampler Volume 9, and it remains the greatest demo disc in existence. In addition to Metal Gear Solid, the disc included single levels from what would be some of the PlayStation's greatest titles: Wild 9, Crash Bandicoot: Warped, MediEvil, Spyro the Dragon, and Brave Fencer Musashi.

The Interactive Sampler demo of MGS1 was the largest demo I've ever played. Starting at the beginning of the game and ending at the precise moment of the DARPA Chief's death, no chunk of gameplay had ever excited Ash and me in quite the same way. You had time to get immersed in the world and understand Snake's mission. You learned how to play at a reasonable, heavily-tutorialized pace rather than having to check the pause menu every six seconds to find out which button did what (as was the case with every other demo on the sampler). Since the beginning is actually one of the most nonlinear sections of the game, the demo also implied the game's potential for exploration and freedom. Ash and I played through the demo a good half-dozen times before we realized that, holy shit, there was a gun hidden under a cargo truck! A gun! That they didn't shove in your face! We spent the next twenty minutes gleefully blasting away guards, marveling at the fact that a game would have the courage to hide something so important in a place where most players probably wouldn't find it.

Later, we found the alternate entrance into the base on the heliport's second floor. It didn't have that fun bit with the scared rats, sure, but it also didn't guarantee an alert when you inevitably walked in front of the surveillance camera that protected the other entrance. "Oh man," we shouted, "the guards toss a grenade into the vent if they see you hiding in there whaaaaat."

We experimented with different ways of completing the demo. Could you get through without alerting anybody? Get through without leaving a single guard alive? Could you lead a guard on a wild goose chase just by tricking him into following your footsteps in the snow?

Not to mention all the intriguing questions posed by the demo's cliffhanger. The DARPA Chief dies of a seemingly random heart attack. A redheaded woman bangs on the wall in the next cell. Years before Lost, the climax of Metal Gear Solid's demo had us rapt—this was our first dose of mystery-centric storytelling. Why did that guy suddenly die? Did Snake kill him? Who was that redhead, and why did she mutter "that card key…" when she heard the DARPA chief mention it?

We rented the full game as soon as our parents allowed us to, and blitzed through most of it sitting on the end of Ash's bed.

I mention this not only to indulge in nostalgia, but to give context for what you're about to read. Ash and I are, to put it bluntly, going to shit on Metal Gear Solid. We'll talk about flaws in its story. We'll talk about how it's sexist and regressive. We'll talk about how, despite its reputation, it's actually a pretty bad stealth game. Today, MGS1 represents many things we either disagree with, find irritating, or actively fight against in our jobs as critics and creators.

But: Metal Gear Solid was the perfect game to Ash and me as kids. We love it with the part of our hearts protected by Kevlar nostalgia. In the chapters to come, we're going to try to remember that love and we hope you'll do the same.