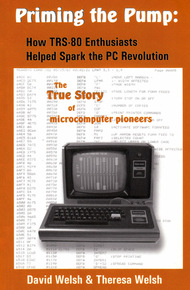 David Welsh always loved tinkering with electronics, so when Radio Shack offered the first off-the-shelf microcomputer in 1977 for $600, he bought one and, like other hobbyists, taught himself how to program. His wife Theresa Welsh was a writer who heard about something called word processing and wanted it, yearning to throw away her old typewriter. From their home in Detroit, they developed and sold a word processor that ran on the TRS-80, pioneering a new industry called software.

David has also worked as a professional photographer and software consultant. Theresa was a free-lance writer-photographer and had a 20-year career in IT as a technical writer. Both are retired and working on personal projects.

Priming the Pump by David Welsh and Theresa Welsh

Although people persist in crediting Apple or IBM with inventing personal computing, the idea was in the ether much earlier. In the early 1970s, electronic hobbyists began tinkering with the new microchips which spawned a modest business in mail-order computer kits. Hand-built, these computers required patience, skill, and a burning desire to learn arcane programming techniques.

The introduction of the TRS-80 Model I in August 1977 changed this. It was the first completely assembled, off-the-shelf microcomputer, available to anyone for $600 through 3500 Radio Shack stores nationwide. David and Theresa Welsh began as hobbyists wanting a computer of their own, partly to use in their photography business. But, like other enthusiasts of the time, they ended up as entrepreneurs on the leading edge of a revolution, joining hundreds of other microcomputer owners who created their own software, then began selling it out of garages, basements and whatever space they could rent cheap.

Histories of personal computing often begin with Bill Gates and Steve Jobs, and both played major roles, but before they built their empires, there were other people filled with passion for computing who created breakthrough products. David and Theresa sought out and interviewed legendary microcomputer pioneers who told amazing tales, as well as forgotten trailblazers whose programming efforts paved the way for today's computer-saturated society. This book, with over 100 illustrations, is their story and the story of the computer revolution of the late Twentieth Century and some of the incredible people who made it happen.

"A rare in-depth look into the history of the TRS-80, the home computing boom of the late '70s/early '80s, and how the authors got personally involved in the blossoming of the 'PC revolution'." – Simon Carless

After the team from Tandy left the Warwick Hotel in New York, where they had given the world the TRS-80, they went to Boston to exhibit at a computer show. The Tandy group, which included Don French, set up their computer on a table without any fanfare at all and showed it to the people who drifted by looking at the wares of various small-time vendors, mostly selling expensive kit computers. French recalls being there alone and finding his booth "swamped" with people wanting to see the TRS-80. He said the press really picked up on the new machine at the show and there were a number of interviews and articles that followed.

Among those who stopped by the Tandy table that day were Dick and Jill Miller, who were seeking a computer for a volunteer organization which Dick headed. They were trying to get a government grant and had quoted a price of $5600 in the grant request to buy a computer. However, they had begun to feel they couldn't get anything for that price that they could be sure would be reliable. Apple had just introduced their first model, but, as Miller tells it, "They weren't a real company yet …all these things were being made in garages; what's more they're not being made, they're being kitted — you have to put them together." They had also learned that smaller disk drives were now available for microcomputers. Jill, a professional programmer, knew about disk drives, but the ones she used in her work were huge. Both knew having a disk drive would give them real capability and they were looking around the show for a reliable micro to which they could attach a disk drive.

Dick's initial reaction to the seeing the TRS-80 sitting on a table at the computer show was: "I couldn't believe it!" He says it was half the price of anything else, it was already put together, and it was offered by a respectable large company. It didn't have a disk drive, although the Tandy guys had set up an empty hexagonal-shaped box that was supposed to look like a disk drive. They were telling onlookers that they would have a real disk drive available for their TRS-80 in the near future. Both Millers thought it looked like a great buy, but wondered if there was a catch. Dick came back the next day with a friend who knew about computers and both of them ended up ordering a TRS-80.

Don French left the Boston show for a trip to Japan and when he got back he found the Tandy switchboard paralyzed with phone calls. More than 15,000 calls had come in from people who wanted to buy a TRS-80. The company had produced only enough to have a few to show, not expecting to sell very many, and these were all hand-made by seven employees. Despite the deluge of orders, the bosses still didn't believe the revolution was happening, and they dragged their feet gearing up to meet production.