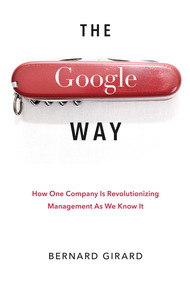 Bernard Girard is the author of several books on management and has consulted for some of the world's best-known firms. He lectures globally on Google's management strategies and ways they can be applied to businesses of all kinds.

The Google Way by Bernard Girard

Shortly after World War I, Ford and GM created the large modern corporation, with its financial and statistical controls, mass production, and assembly lines. In the 1980s, Toyota stood out for combining quality with continuous refinement. Today, Google is reinventing business yet again—the way we work, how organizations are controlled, and how employees are managed.

Management consultant Bernard Girard has been analyzing Google since its founding in 1998, and now in The Google Way, he explores Google's innovations in depth—many of which are far removed from the best practices taught at the top business schools.

As you read, you'll see how much of Google's success is due to its focus on users and automation. You'll also learn how eCommerce has profoundly changed the relationship between businesses and their customers, for the first time giving customers an important role to play in a major corporation's growth. Finally, Girard speculates about the limits of Google's business model and discusses the challenges it will face as it continues to grow.

"A smartly written 2009 business book that analyzes Google's crown jewel - its search engine and related ad networks- and looks at the culture and technology that has made the company one of the world's dominant tech firms." – Simon Carless

Chapter 1. REBELS WITH A CAUSE

Google co-founders Larry Page and Sergey Brin have undeniable talent. Who else in recent memory has been able to start and build a world-changing, international powerhouse seemingly overnight?

Page and Brin have the self-confidence and conviction of visionaries for whom making a fortune is not enough. They want to change the world, and they are driven by a shared desire to improve Internet searching.

Nonconformists, they make decisions that buck conventional wisdom with ease. Anyone tracking the Google IPO learned this early when Google adopted a Dutch auction format that gave the investment world quite a stir in its attempt to democratize the sale of shares.

And Page and Brin are true friends, a characteristic shared by several company co-founders before them, like college buddies Bill Gates and Paul Allen, the two Microsoft co-founders, and college friends Dan Bricklin and BobFrankston of VisiCalc (the first spreadsheet). SteveWozniak and Steve Jobs met as 18-year-olds at a summer IT class hosted by Hewlett-Packard. Hewlett-Packard, in turn, was founded by college friends Bill Hewlett and Dave Packard. And the list goes on.

Friendship creates a safe space for people to exchange and test their ideas, and friends can drive each other to succeed. In an environment as risky and turbulent as Silicon Valley, friendships can foster an us-against-them mentality that helps companies resist the pressures that threaten their independence.

Finally, but no less important, Page and Brin figured out how to take advantage of every available resource. In his pivotal book Art Worlds, the sociologist Howard S. Becker demonstrates that artists—the most individualistic of individualists—need what he terms "art worlds" to create their work. Entrepreneurs are no different. The co-founders of Google benefited from both a favorable environment and fortunate circumstances. The university they both attended, Stanford, competes with the University of California, Berkeley, to train some of the most highly skilled developers of web technology. (Two earlier large search engines, Yahoo! and Excite, also got their start at Stanford.)

Page and Brin founded Google when startup funding was available within their financial environment, and the legal environment facilitated the mobility of expertise and free circulation of ideas. Maturing hardware technologies meant that the memory and microprocessors they needed to build their engine were getting cheaper all the time, thanks to manufacturing in southeast Asia.

As Stanford students, Larry Page and Sergey Brin inherited a long, rich technological tradition. Using the term tradition in conjunction with a company that developed a brand-new technology might seem strange, but their breakthrough was a direct outgrowth of the concept of artificial intelligence (AI), which had been in development at some universities for half a century. When Page and Brin explain Google's mission, "to organize the world's information and make it universally accessible and useful," they are simply repeating the memex agenda—a theoretical project envisioned by Vannevar Bush, one of the more important American scientists during the presidencies of Franklin Roosevelt and Harry Truman.

Seeing the debt Google owes Bush is easy when you read an article he wrote in 1945, against the backdrop of World War II, when he was a scientific advisor to the White House:

There is a growing mountain of research. But there is increased evidence that we are being bogged down today as specialization extends. The investigator is staggered by the findings and conclusions of thousands of other workers—conclusions which he cannot find time to grasp, much less to remember, as they appear. Yet specialization becomes increasingly necessary for progress, and the effort to bridge between disciplines is correspondingly superficial. Professionally our methods of transmitting and reviewing the results of research are generations old and by now are totally inadequate for their purpose.… The summation of human experience is being expanded at a prodigious rate, and the means we use for threading through the consequent maze to the momentarily important item is the same as was used in the days of square-rigged ships.… A record if it is to be useful to science, must be continuously extended, it must be stored, and above all it must be consulted.[1]

Bush went on to list some contemporary techniques likely to address this problem before describing an imaginary machine called a memex. It sounded like science fiction at the time, but this machine nourished the dreams of technology experts and artificial intelligence advocates for decades until it became a reality:

Consider a future device for individual use, which is a sort of mechanized private file and library. It needs a name, and, to coin one at random, "Memex" will do. A Memex is a device in which an individual stores all his books, records, and communications, and which is mechanized so that it may be consulted with exceeding speed and flexibility. It is an enlarged intimate supplement to his memory.[2]

These early stages of modern Information Science were one source of Page and Brin's ambition and vision to make all the information in the world accessible. The Google co-founders were also given access to a considerable body of research. Universities played an important part in developing technology hubs, not only by training professionals who would go to work for the surrounding companies but also by making the work of their researchers freely accessible.

This tradition helped form Page and Brin's values and convictions. In particular, they had confidence in the capabilities of computers and the automation initiatives at the core of their corporate model.